photo: City Hall Prague 4/Monument to the fallen from the First World War in Krč

The unique cubist monument to those who died in the First World War in Krč is badly damaged and the plaque with the same victim has disappeared from it. Prague 4 therefore decided to find the names and add them.

According to website The search for the same victim in the archive materials of Prague 4 was very challenging. In addition, the list may not be final even now. However, thanks to its digital form, it will be possible to supplement and update it based on new findings.

All known names of the victims so far are listed in a document that can be read using a QR code. It was placed in the pavement right next to the monument in Sulická Street in Krč. After downloading it, those interested can also learn about the search for lost names itself.

The monument itself is a historical monument

The monument was ceremonially unveiled in Krč on October 28, 1931. A large part of the funds for its provision were provided by the large landowner Marie Welzová, who was also the owner of the land on which he grew up. The author of the monument itself was the academic sculptor Bohumil (Bohuš) Hlaváček.

“The monument in Krč is a reminder of our ancestors who gave their lives in the conflict, which until World War II was the bloodiest in human history. It dates back to 1931, so it is a historical monument in itself. It reminds us of the fact that our ancestors were able to honor the memory of their fellow citizens. In addition, it is a unique work of art, because there are very few cubist monuments of this type in the Czech Republic,” said the deputy mayor for culture and property Michal Hroza (TOP 09).

Name plates were lost or destroyed

The names of the fallen were originally carried by two marble slabs, but they were lost or destroyed. It was not even possible to read the names from the period photographs that depict the plates. The list of names and legible photographs are not even in the Archives of the Capital City of Prague.

The sources for obtaining the list of names became the documents of the Military Central Archive, which relate to the fallen from Krč, as well as death notices from the press of the time. Even these sources may not be accurate and complete.

The new reconstructed list of the fallen from Krč thus becomes an unfinished document, which will be further supplemented in case of new information. In addition, the City Hall of the fourth district welcomes any suggestions that could create a name list of help.

A document showing which archive documents the name is found in and which also includes a full research note is also available Download on the website of Prague 4. 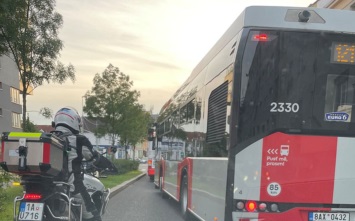 Czech Republic has a hundred new charging stations, the most charged in Prague

Together, the Pirates and STAN want to have the coalition agreement ready next week. It solves the distribution of forces and competences | iRADIO

Together, the Pirates and STAN want to have the coalition agreement ready next week. It solves the distribution of forces and competences | iRADIO

‹ Bulgaria condemned the referendums in Ukraine before the UN › Live Poker | Casino Salzburg: 4-Way Deal at the Pokermania Main Event