Financial profile: Lunar CEO Eilin Schjetne: – It was smoke, vodka on the table and strip clubs

This article was first published in Finansavisen Saturday.

FINANCE: – We are not here to be a bank, says bank manager Eilin Schjetne in the digital bank Lunar and continues:

– We are a technology company with a banking licence.

In the same way that few people were interested in the invisible power before Tibber came to market and made people interested in power prices, Schjetne and her friends at Lunar need to do the same with banking services.

– It is a fact that most people close their eyes when it comes to the bank. It is boring and partly incomprehensible to most people. But when it is said; there are many good banks out there, but we are not here to do what the other 120 banks in Norway already do well. We have a good relationship with all the banks, and now they have started to include us in the competition overview. Then I’ll be happy.

Joy comes in many facets. And Schjetne admits that she was a little different from when she was a child. When she was selected for children’s birthday parties and the other children watched movies, the young girl, who would later turn out to be illegally creative, sat and thought and reflected on why things were the way they were. And when she had to choose which university to attend in Bergen, she chose exactly the opposite of what most others would do.

– I chose the school where the principal was. Mom and Dad were divorced, so I wanted to see mine much more often. I visited the principal’s office every day.

Position: Head of Norway in Lunar.

Background: Worked with development and innovation in banking and finance for over 20 years, in DNB and Visa, among others. Graduated from Queen Margaret University in Edinburgh and the London School of Economics and Political Science.

Current: Launching banking services for start-ups in Norway in autumn.

The floor of the Storting will be yours. What case are you taking up?

Several traditional subjects in the first school years can be removed from students. We should look at the curriculum with new eyes; redefine and modernize in such a way that the subjects are better adapted to today’s and tomorrow’s society. Technology is transforming society in ways we have never seen before.

Where is your worst investment?

I have always invested in homes that no one else wants to take in to completely renovate them. The investment was bad. I now see that I would rather invest in digital property, which has increased many times in value recently.

Which book would you recommend to others?

The founder of Wired, Kevin Kelly, wrote in the 2016 book “The Inevitable”. It deals with twelve technological drivers he believes will shape the future and live our lives for the next 30 years. Up until now, we have only begun to see the outlines of this.

The holiday you will never forget:

Cartagena in Colombia. A unique old town that is on the UNESCO World Heritage List. It is beautifully situated by the Caribbean Sea. An incredibly exotic experience is happy people, good food and lots of energy.

As a 14-year-old I went with the newspaper. The route was far away, so I had to get up early to be ready to deliver from 06. Delivering newspapers on a dark, rainy Bergen morning is a brutal way to understand money.

And she, like her older brother called «The Thinker», chose to explore the world at the age of 17. Finally from her mother. Schjetne packed the snipe and traveled to the Orkney Islands, the windswept eyes north of Scotland. For a year she was to live in Kirkwall, a place with 8,000 inhabitants.

– Experience the world, as it were, says Schjetne and imitates her mother’s voice.

– But I couldn’t be there for a year without experiencing Scottish culture, more specifically published. I then contacted the editor of the local newspaper The Orcadian and said that I could write for them for free in return for it saying “Eilin Schjetne (18)” in the paper. The editor thought it was a good deal, and I carried the clip in my pocket until the doormen knew I was an established pub guest.

Not quite A4: Eilin Schjetne has always been a little different. Photo: Ivan Kverme / Finansavisen

Party on the first floor and massage on the second floor

After higher education, Schjetne was not interested in the typical fields of study, and moved to Edinburgh. For four years for creative and innovative thinking, communication and how technology will change people and society on the timetable. It ended with the Norwegian student writing such an innovative paper that she was offered a doctorate.

– It was too academic for me. I wanted to combine the analytical with business life and instead took a year at the London School of Economics and Political Science.

There she wrote a master’s thesis on how the bank had to secure loyal customers when the customer switched from a physical bank to an online bank.

– It was relevant in the year 2000 and has been just as relevant ever since.

She got a job as market manager at Eurocard, later SEB Kort. There, further life was breathed into the foundation, so she combined work with the Gründerskolen in Oslo and placement in Singapore. A country with very few natural resources, and yet enormous abilities for innovation. But Schjetne did not stay in Asia. The next stop was as market manager at Tandberg ASA with responsibility for the former Soviet states, the Baltics and the Benelux countries. As a young woman and lending in Russia, she met a new side of working life.

– It was smoke, vodka on the table and strip clubs. Party on the first floor and massage on the second floor. It was a demanding time, and when it was time for stripping and massage, I was told that my working day was over, chuckles the current bank manager. 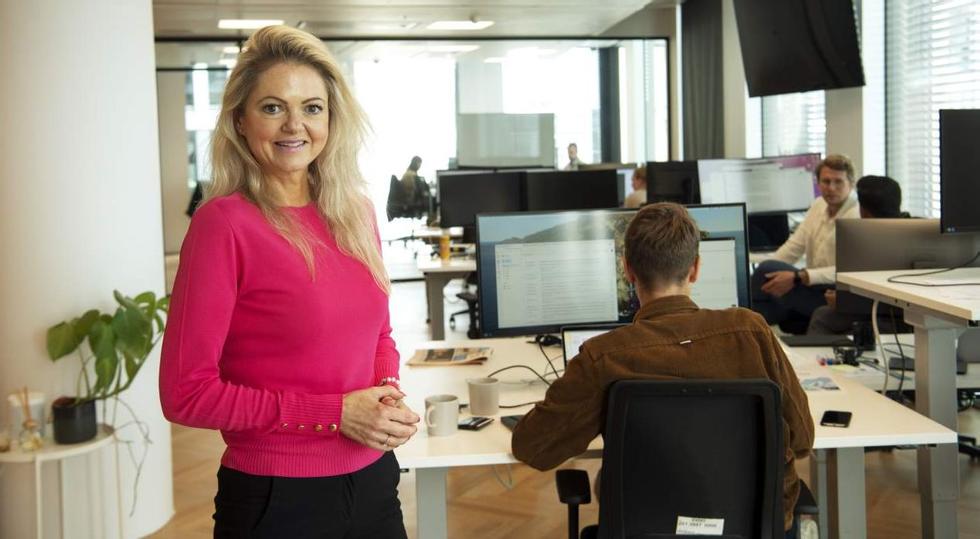 No branches: Lunar Norge has offices in Via Vika and the bank is fully digital. Photo: Ivan Kverme / Finansavisen

At 30, Schjetne became pregnant. Together with his partner who was working at DNV, they moved to Singapore. They were there for three years. And the two who left had become four when they got home. But don’t think that Schjetne was a typical expat. For two years she was a mother of young children and a founder in Singapore. The gap in the market was lively clothes for little boys. With production in India, sales to five stores in Norway, set up by online stores et cetera, the stage was set for launch. But this was not satisfactory enough for the new mother of toddlers.

– I am a hybrid between an entrepreneur and a businesswoman. When we had to go home after three years, I gave away the entire collection to an orphanage.

Home was Oslo, and employer DNB. For eight years had been considering various leadership roles in DNB, visited Nets to work with innovation and get similar tasks in Visa. First as product director for the Nordics and again the Baltics. She then helped cannibalize Visa’s core business in her new role at the London head office. Historically, Visa was synonymous with cards, but cards no longer have monopoly status. The world has moved on and account-to-account payments, open banking and real-time payments are flourishing.

– It was incredibly exciting, because the Nordics have the potential to be the furthest ahead in the world in this regard, even if China is now coming too full.

Schjetne are far above average interested in technology. That is why she also devoured Kevin Kelly’s book «The Inevitable» about the technological drivers that will shape our next 30 years.

– Until now, we have only begun to see the contours. This is when the real revolution starts. The key thing that is happening now is that the physical surroundings are becoming intelligent. Everything gets its sensors and chips and ends up in the cloud. Artificial intelligence is then added and we are faced with a massive robotization and a fundamental transformation of the way we interact with the environment.

– Products become services and processes. Car is a good example. It will be a transport service. It’s not just talk of going from owning to renting, but also robotization and new benefits with flexibility and connections we can’t imagine yet. 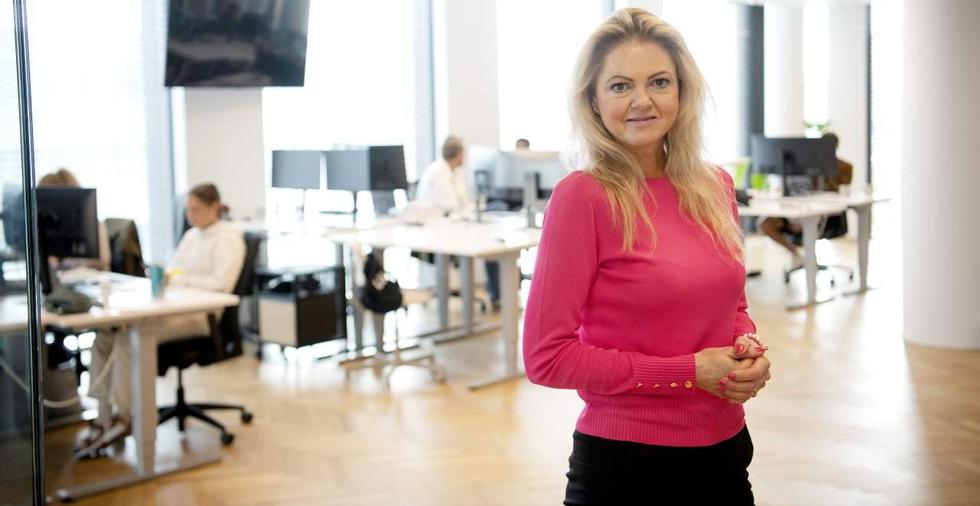 Early on: As early as 1999-2000, Eilin Schjetne wrote a master’s thesis on how the bank had to secure loyal customers when the customer switched from a physical bank to an online bank. Photo: Ivan Kverme / Finansavisen

And speaking of changes; Schjetne probably received an inquiry from an industry she knows well. Last June, Lunar needed a manager for Norway.

Lunar was founded in 2015 in Denmark by Ken Villum Klausen. Four years later, Lunar was established in Norway and Sweden. Lunar Norway owns one hundred percent of Lunar in Denmark, with investors such as Swedish Kinnevik, Danish Heartland, which owns many of the major clothing brands there, and Chinese Tencent, which, among other things, is behind WeChat.

Not heard of Lunar? The challenger bank was put on the map when it became known that they wanted to buy Norwegian Instabank for DKK 1.3 billion. But the acquisition deadline of 30 September this year is likely to be pushed back because Lunar in Denmark has signaled that they consider it unlikely that they will be able to raise the necessary capital and complete the regulatory process within the deadline.

– We cannot say anything until after September 30. We have nothing new to report in this case, says Schjetne.

Well, Lunar has over half a million customers in Denmark, and half of all new establishments with our neighbors in the south apply for an account in Lunar. In Norway, the bank has 70,000 private customers and later this autumn the banking services for start-ups will also be launched.

– In any case, we have not put listening lower in Norway than in Denmark, says Schjetne.

– Start-ups are, after all, high-risk customers. Why do you want them?

– This customer group is not the most profitable, and therefore the big banks have not prioritized them either. This is a gap in the market. The solution to making money here is volume.

– To have many customers who are not profitable?

– No. We have systems built for them. They don’t need such complicated services, but quite simple solutions that don’t cost that much. The app and service are presented in a logical way with a simple pricing strategy. Where other banks may have up to 200 different fees, operate with a quick price.

– But an entrepreneur often runs out of money and may need credit. How do you solve it?

– The large banks such as DNB, Storebrand and SR-Bank have agreements with credit banks that specialize in small, e.g. Aprila Bank. Until then, we do not give credit from day one, but we have to get that in place, either from our own books or via partners. We understand start-ups, because we are a start-up ourselves – born in the cloud and built from scratch. We are a different bank and not an old trotter in skinny jeans, says Schjetne with a cheeky kick to traditional banks that have launched digital spin offs.

The buzz to tops in Norwegian selection

Academics appeal against dismissals: — Strengthens a regime of fear

– Didn’t know there were Danes who did ski jumping

‹ Employees of the Carrefour Market in Toulouse on strike for the increase of their “Macron bonus” › Hlubuček, who was prosecuted, also voted in Prague. I fulfilled my civic duty, he said