Volleyball in Královo Pole is in the limelight again. Young people will compete for the title

When the women’s volleyball extra-league title was played for the last time in Královo Pole in 2010, most of the players in the current staff were struggling with the listed words in the first grade of primary school. This year, a young team led by 21-year-old captain Daniela Digrinovo led the famous brand years later to the finals. In it, Královopolanky will challenge Prostějov, just like twelve years ago. Then KP lost 0: 3 in matches, now Brňanek’s chances for the championship point are higher. 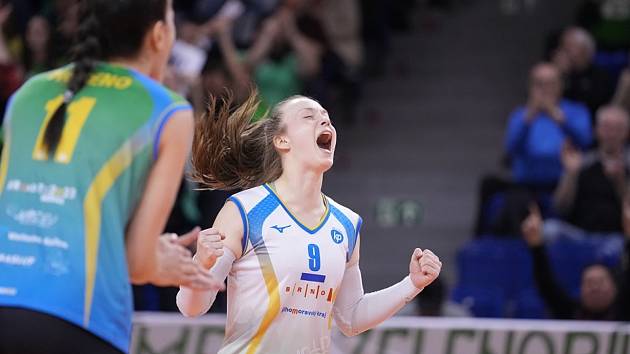 KP Brno volleyball captain Daniela Digrinová has many reasons to rejoice this year.

After all, the KP players finished in the table in front of the Haná opponent and the series on Tuesday from six o’clock in the evening in the home hall in Vodova Street. “Our team is incredibly motivated and unyielding. In all the difficult moments, he found the strength to rise, which is our huge currency, and I am very happy that my colleagues and I can coach this team, “said one of the team’s three coaches, Richard Wiesner.

The club collects the fruits of honest and quality work with young people. In the basic part of the extra league, KP finished second below the years after years, and it also won the Czech Cup.

The team showed great strength in the semifinal series with Olomouc, which could hardly be more dramatic and more captivating. She reached the last possible fifth match, which KP won in the big drama on Good Friday in the tiebreak.

Two more duels of the extraordinary series also made it to the fifth set. “I believe that the fans liked it, and that it attracts them to the last series, because Prostějov is perhaps an even harder rivalry. But it will be best to see for yourself, “invited the Brno pilot Wiesner.

In Králové Pole, he now believes in massive spectator support. Fever, as during the progress of the Brno volleyball players to the finals six years ago, is not expected, but over seven spectators have already found their way to the hall in Vodova Street. “The fan scenery was great and everyone in the hall definitely enjoyed it. This is exactly the playoffs, “said team captain Digrin.

It was she who experienced the rise of KP from the top to the current promotion to the finals. The talented libero came to Brno in the autumn of 2018, when the club, after the departure of experienced support to the newly formed Beast Brno, significantly rejuvenated and withdrew from the medal fights.

In the following three CPs, it always fell out in an express way, the turning point occurred only this year. “We said before the season that we want to go back to the medal fights now, which we did,” Wiesner said.

The finals will be played in the volleyball extra league for the first time since 2019, in the previous two years the season ended prematurely due to the coronavirus pandemic.

You can get the best football news from all competitions only on Deník.cz. Become a digital subscriber and you will read about football, as well as all local sports without restrictions. 20% discount for fans now. Vice here.