What the bombing of Prague in 1945 looked like: Half a street dead in a few minutes

The bombing of strategic cities, including Prague, was a frequent horror during World War II. It was mostly announced by sirens that warned people of the impending danger and the possibility of hiding in shelters. However, the unexpected bombing of Prague on February 14, 1945, ie before the end of the war, was somewhat different. Approximately 50 American planes turned to Prague, which lost their orientation. Moreover, it was not an attack by the Nazis, but by the Allies, behind which was a mistake.

Before the end of the war, the American army dropped a bomb shower on Prague, believing that it was Dresden in Germany. The unexpected and unwanted bombing of the capital was due to a radar failure and high clouds and strong winds. The bombing was carried out as a “blind attack” using radar. One of the pilots leading the group was Lieutenant of Czech descent Andrew Andrako flying the B-17 serial number 43-38652 V, “Stinker Jr.”.

At that time, Prague was the capital of the protectorate, so it was also the target of bomb attacks. But other armies. Allied troops mistaken the target and instead of enemy Dresden dropped bombs on the surprised Praguers. According to American pilots, this was the result of a navigation error. In addition, Dresden was the target of massive bombing at the time, and the German one was only 120 kilometers from the protectorate metropolis. American planes appeared over Prague shortly after noon on February 14, and even though sirens began to sound, people did not rush to the shelters. The curator of the aviation collection of the National Technical Museum, Michal Plavec, explains this by saying that Prague has already experienced many false alarms.

Emmaus Monastery and the former Ministry of Social Welfare after the raid.Source: JUDr. Jaroslav Lašťovka / Creative Commons, CC BY 3.0, https://creativecommons.org/licenses/by/3.0/

Forty B-17 flying fortresses of the Eighth Army Air Force dropped about 152 tons of bombs on many populated areas of Prague. The districts of Vyšehrad, Zlíchov, Karlovo náměstí, Nusle, Vinohrady, Vršovice and Pankrác were affected.

701 people were killed and 1,184 wounded for the unwanted bombing, all of whom were civilians. About a hundred houses and historic buildings were completely destroyed and another two hundred severely damaged. At the same time, none of the city’s factories, which could be useful for the Wehrmacht, were damaged.

The destroyed buildings included monuments such as the Emmaus Monastery, the Faust House and the Vinohrady Synagogue. Numerous modern buildings were later built in their place, such as the Dancing House or the church in Emmaus. 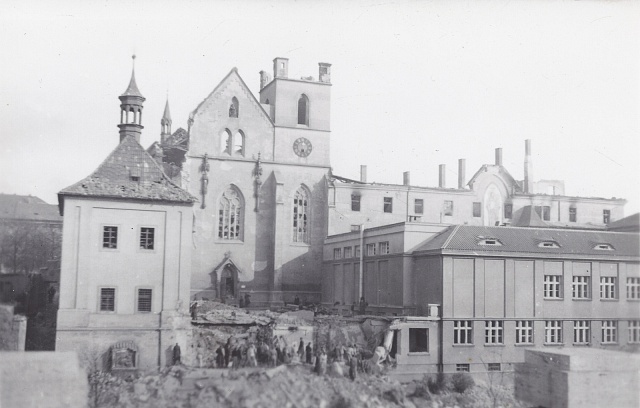 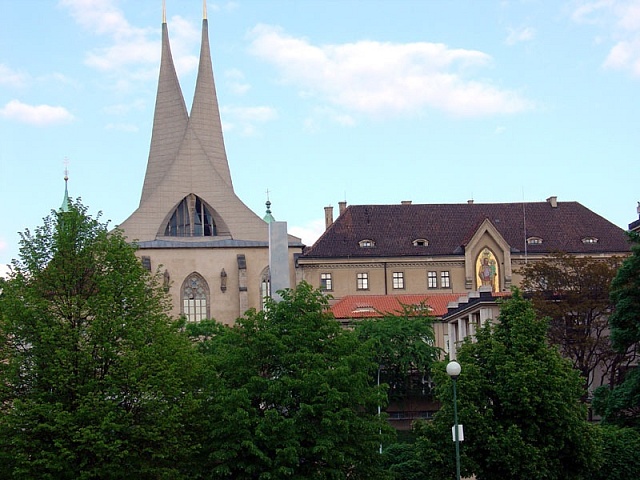 After the tragic event, American pilots received their regrets many times. The history of the 398th Bomb Squadron base at RAF Nuthampstead, which carried out, states that the attack was an accident. Due to the aforementioned “coincidences”, the Allied formation reached the presumed “target”, which was believed to be Dresden, at the time of the bombing. Many of the soldiers said that Prague and Dresden look similar from the air, both cities were flowing rivers. 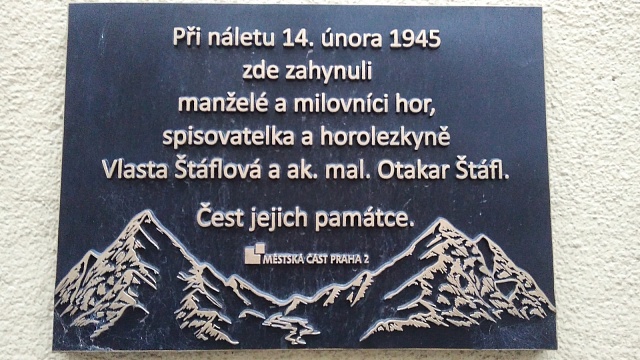 Dagmar Procházková he was 19 at the time and he remembers the whole event. “Suddenly a terrible rumble. Darkness and something were falling. Rubble and dust. Suddenly I was under the table and then in the closet. “ At the time of the raid, Dagmar worked as an accountant in a wholesale store on Charles Square. The bombs began to fall as she warmed her lunch. An acquaintance helped her out of the rubble.

“Half a street of dead people. Podskalská, Faust’s house was completely broken. There was a hospital against us. It was like taking a knife and cutting up the hospital. Half the bed was sticking out, half the bed was gone. No horror. Water flowed from the sewers everywhere, “ she added. 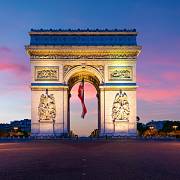 The bombing took only a few minutes, but destroyed dozens of houses. According to an aviation historian, the victims of one bombed-out house on Vinohradská třída were found Michala Plavce until the early 1970s. Although a group of people survived in the shelter, they waited in vain for rescue.

According to historian Michal Plavec, who studied archival documents and spoke with some American flights, the Americans did not want to bomb Prague at the time.

“They used more than expected, and the lieutenant colonel apparently thought that the fuel wasn’t enough for them to return smoothly, so they decided to bomb the first city they saw.” approaching Swimmer background bombing. The Americans undertook a targeted raid on Prague at the end of 1945. At that time, they decided on CKD plants and the old airport.