After the theater fire came another blow. The flood swept away the Charles Bridge and killed

On the third of September, the flood wave culminated in České Budějovice and rushed to Prague. The water carried a lot of wood with it, because at that time it was still floated on water on rafts, and in many towns and cities there were warehouses full of logs along the river banks. The flood wave took it all with it and drove it like a huge battering ram against the piers of the bridge.

Charles Bridge celebrates 665 years: It was destroyed by floods, it influenced the history of Prague and the whole country

On Tuesday, September 2, 1890, news arrived in Prague from Beroun that Berounka was also flooded. It was obvious that when the two flood waves collided, Prague would experience another flood apocalypse after 18 years.

“Today, my Prague did not fall into peaceful dreams, only in half-sleep like a sick breath and the waves grow, grow, keep growing. O holy river, dear artery of the earth, which at other times slumbers quietly in the sun, what has suddenly awakened you to a storm? My country is suffering, it has been suffering for centuries, and it bears the blows already dull and mute – does its anger suddenly fly like revenge, which has no end? poetplaywright, translator, librettist and theater director Jaroslav Kvapil.

At that time he was practicing in Prague III. a battalion of “diggers”, also called “sappers” or “pioneers”, in other words, engineers who trained in the construction of a pontoon bridge. This bridge was laid over the Vltava in Prague’s Karlín not far from Invalidovna even before Sunday’s rains, and when the news reached Prague that water was flooding houses in Beroun, the battalion commander, Lieutenant Colonel Blondein, decided that it should be dismantled so that it could be saved. 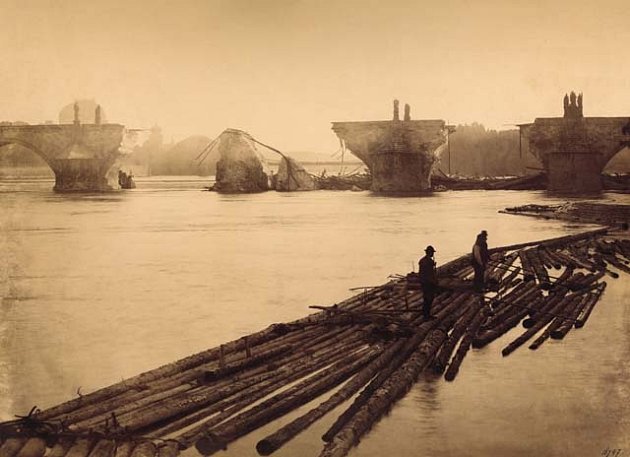 The demolition of the Charles Bridge was a similar blow to the people of Prague and to the Czech public at the time as the fire at the National Theater a year earlierSource: Wikimedia Commons, author unknown, free work

Unfortunately, Blondein underestimated the power of the Vltava, so he allocated only two ten-man detachments, i.e. a total of 20 soldiers, to dismantle and assemble the bridge. According to some later testimonies, he took it as a good exercise for a state of war and concluded that deploying an entire battalion to dismantle one bridge would be something no army could afford in wartime.

The first estate uprising: This too ended with the chopping of heads, they rolled in Hradčany

The water in Prague was still rising. The Royal Meadow turned into one big lake and Na Výtoni and Plavecká streets were flooded in Podskalí. On the night from Tuesday to Wednesday, disaster struck.

“When at 2 o’clock in the morning the news reached about the rising water on the Vltava, Deputy Officer Mr. Kieswetter got into a three-part pontoon with 30 pioneers to save the military boathouse on the left bank of the Vltava,” Jan V. Veselý described the fateful moments that followed.

All thirty engineers under Kieswetter’s command set sail with the pontoon upstream along the right bank. Their plan was to get high enough above the float, then launch into the current and let it carry them across the river. Unfortunately, at the very moment when the pontoon went to the middle of the river bed, the rafts torn from Podskálí came rushing.

The rushing logs struck the pontoon like torpedoes and overturned it. Everyone on it was thrown into the water. “The deputy officer and several men luckily still caught on to the rope of the rescue bridge, but the others were swept away by the current and disappeared in the waves,” he described to Veselémy.

Former director of the Prague Zoo, Petr Fejk: I still have dreams about the floods of 2002

Centurion Reich was watching the situation from the shore, and together with several other women, he decided on a rescue operation. The soldiers under his command quickly cut the ropes of the boats tied to the shore and waded into the current to pull the drowning man out of the water. But their self-sacrificing intervention was in vain. It was night, pitch black, and heavy rain and wind were still raging. Despite their best efforts, they found no one. Except for those who, together with Kieswetter, caught hold of the ropes of the rescue bridge and then swam back to the right bank, all but one of the other soldiers perished.

One of them was a lucky man who was driven by the current directly to the bushes on the banks of the Liben river. The man grabbed hold of him and managed to scramble ashore. There, however, his strength left him and he collapsed. He didn’t wake up until morning and staggered back to his unit around ten. For a moment, he awakened hope in the others that someone else had been saved, but it soon turned out to be odd. “There were a total of twenty dead trenchers,” said Veselý.

Today, their names are commemorated by a memorial column in the orchard in front of the Invalidovna in Sokolovská Street No. 136/24 in Prague 8 Karlín. Part of this monument is also a plaque with the inscription: “In memory of the trenchers of the former rak.-uh. The 3rd half of the battalion died on September 3, 1890 while performing their duties in the waves of the flooded Vltava”.

And there was still water. The climax occurred on September 4 between 8 and 10 p.m. In the Old Town, the entire Liliová and Karlova Streets were flooded, in Betlémské náměstí the water reached as far as the building of the Náprstk Museum, and large parts of Řetězová were flooded. Mariánské náměstí was under water, up to the portal of the Clam-Gallas palace.

In Kampa, a number of houses were flooded up to the height of the first floor. The whole of Žofín was also under water, on the ground floor of some houses in Josefov the water level reached almost to the ceilings. However, the most fatal blow to the national feeling was yet to come.

“At about half past six in the morning, a terrible rumble is heard, and immediately, as if by telegraph, a message flies from mouth to mouth, from street to street, a terrible, wonderful news: The stone bridge has collapsed!” writes Veselý.

Flood 2002 day by day: It was August 28 and they reopened the Charles Bridge

“This terrible news had a terrible effect on the inhabitants of the houses surrounded by water,” he continues. “Many of them thought no other than that all was now lost, that when even the stone giant, of whose strength and safety no one doubted, could not withstand the rapacious currents, it would be a foolish hope to rely on the strength of the old dwellings of men.”

Veselý adds that “since the fire at the National Theatre, there has not been a disaster that would have so painfully shaken the hearts of all the Czech people as the disaster that befell the ancient Charles Bridge”.

At that time the first two arches collapsed. But it was still not over. Around a quarter to ten in the morning, Charles Bridge received another blow.

“A new terrible disaster has overtaken the ancient Charles Bridge. One more arch, namely the eighth from the old town side, collapsed into the waves, so that between the two gaps, only the pillar on which the statue of St. John the Baptist. Huge crowds of people on the embankment cried out in astonishment and thousands of hands folded overhead,” described Veselémy.

One of the most devastating floods

It was not until Friday, September 5, 1890 that the water began to recede. The damage left behind by the flood was enormous. The damage to the floating wood alone amounted to one hundred thousand guilders, but the water also fundamentally destroyed a number of bridges, the Charles Bridge became a sad symbol, as well as many houses, factories, warehouses, roads and railways.

The Vltava also caused enormous damage in its lower reaches beyond Prague, in Mělník. From Jaroměř, the landscape and the village were also ravaged by the flooded Elbe, mostly in Litoměřick and Ústeck.

The demolition of the Charles Bridge deeply affected the entire Czech society. “The magazines Zlatá Praha, Světozor, Reports of the Association of Architects and Engineers in the Kingdom of the Czech Republic and the Magazine of the Jubilee Exhibition in Prague competed in publishing reproductions of Bellmann’s, Mulač’s, and Maloch’s photographs of the demolished Charles Bridge and Liebscher’s painting sketches from the flood in and around Prague,” he wrote in .in 2003 Bulletin of the Club for Old Prague.

PICTURE: Charles Bridge celebrates 665 years. The commemoration of the anniversary began with a royal procession

The whole company is now (again, similar to the case of the National Theatre) focused on its rapid restoration. As early as September 23 and 26, 1890, i.e. immediately after the peak of the flood wave subsided, a commission of experts and representatives of the municipality looked for its pillars and proposed a procedure for possible reconstruction. The new arch of the demolished bridge arches was photographed by the photographer Jan Mulač already in 1892. And during the repairs, a symbolic discovery was made at the bottom of the river, which reminded the people of Prague of the first great flood destruction in 1784.

“To everyone’s surprise, a tin plate was found in the foundations with the date 1784 and a note about the rebuilding of the pillar under the direction of Prof. Eng. FL Herget and construction director F. Traxal. Count Prokop Lažanský performed the ceremonial placing of the memorial plaque. In the back bridle was found an old primitive foundation, consisting of millstones, laid loosely in the bed of the river on mere sand with mud without a pilot, without a grate. The individual blocks were connected by iron three-point staples. Although this foundation appears so primitive, it contributed to saving the vaults in 1784,” noted the Journal of the Club for Old Prague.

Arakain, with his forty on his neck, was still grinding it out like in his youth at the O2 universe

‹ Greek-Turkish: Why are they worried in Athens – Erdogan is capable of everything › Do you know how much we build apartments in Warsaw? The owner of the development group UDI Group about money, corruption and crooked Prague