Prague is calling for help, the rest of the country is still calm. What does it look like with refugees in the regions – Forum24

In Vladislavova Street in Prague, Caritas has set up a kindergarten for children of Ukrainian refugees PHOTO: Jakub Žák (with permission of the author)

The numbers of refugees from Ukraine have stagnated in recent days, but in total there are around 350,000 people living in the Czech Republic, but they are not validly spread throughout the country. Most of them are in Prague, so the Ministry of the Interior is trying to negotiate with the region to move some of them to less exposed places. The daily FORUM 24 found out the current situation with refugees from Ukraine in individual regions.

Prague has to deal with the largest number of people fleeing Ukraine. The state has been calling for help for a long time. “Our accommodation capacities are already full,” signals Vít Hofman, a spokesman for the capital. There are a total of about 133,000 refugees in Prague and the Central Bohemian Region. That is more than a third of registered Ukrainians. According to the regions, Ukrainian refugees need to be distributed fairly in the regions. “We consider it optimal to clarify the rules for the distribution of refugees at the central level so that it is appropriate to redistribute to all regions of the capital according to the established system,” said David Šíma, spokesman for the Central Bohemian Region.

Refugees with a Hungarian passport are not entitled to support, said the Austrian

Statistical data on Ukrainian refugees in individual regions may differ from reality. The data are based on figures from the Ministry of the Interior and add up Ukrainians who have been granted a residence permit in connection with the war in Ukraine. “Of course, this does not mean the exact number of people in the region, but the number of residence permits issued so far. In some cases, however, people were or are also accommodated on the basis of their own agreement between cities and municipalities, which themselves provide accommodation for already agreed refugees or are accommodated with their acquaintances, “informs Šíma.

The regions have accommodation

There are currently 13745 refugees from Ukraine registered in the Karlovy Vary region. In reality, however, we assume that their number is about a third lower, “said Petr Kulhánek, Governor of the Karlovy Vary Region, for Deník FORUM 24. Regions are working to know the real numbers of Ukrainians living in the region.

“In order to verify the current situation, a pilot project of the process of verification of accommodation in Brandýs nad Labem is underway, where we have approximately 4,500 reported persons reported for inspection. It can be expected that the partial results can be determined by the end of this month, “described the Central Bohemian spokesman Šíma.

Today, the regions have plenty of accommodation. The question is how the situation changes in the summer when the tourist season begins. “In total, we have a contracted accommodation capacity for about 3,500 people. At the moment, however, I do not know what the summer tourist season will do with the accommodation capacity and how many accommodation providers will remain, Eva Mertlová, a spokeswoman, about the situation in the Pilsen Region. A similar problem is being solved in the Karlovy Vary region, where about 900 refugees will have to leave hotels and boarding houses by the end of June.

The region considers the situation with refugees to be calm and stable. The influx of refugees into the regions is gradually weakening. “After the first onslaught in March, the assistance center handled several hundred people a day, with the number of refugees ever repeating dozens a day,” Dan Lechmann of the Hradec Kralove region.

Captive on the edge

The most employed people are currently in the Pilsen region. “We have the highest number of employed refugees among all regions, 7,720 of the total number,” said spokeswoman Eva Mertlová. They have no problem in education either. “In principle, the field of education is not promatic either, in adaptation words, schools and kindergartens we have 2,014 children aged 3-18 out of a total of 7,285,” the spokesman added. 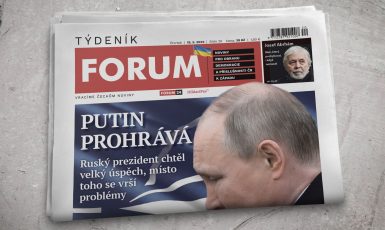 The Pilsen region is the third busiest, the spokesperson Mertlová comments on the situation regarding capacity: “Of course, the Pilsen region is also reaching the limit of its capacities and we may soon find ourselves in the situation in which Prague is. In this case, too, we were happy if those regions where we still had free capacity then helped us. However, a systematic solution to the refugee crisis is fully in the hands of the government, which is taking the necessary steps and taking measures to ensure that the entire Czech Republic manages the crisis and provides refugees with the best that our state can install. “

The governor of Karlovy Vary, Petr Kulhánek, also stated that his region is on the edge of capacity. The biggest problem is in terms of capacity in health care, the lack of general practitioners and education. The situation is similar in the Moravian-Silesian Region. “We are still creating vacancies, we still have accommodation capacity. The bigger problem is the capacity of medical care, especially pediatric or dental, or places in kindergartens, “said Nikola Birklenová, spokeswoman for the Moravian-Silesian region. In the Moravian-Silesian Region, I consider the most complicated to be “the problems associated with the so-called migration, where some newcomers have, for example, dual citizenship and the social benefits they claim are not entitled.”

There will be no public skating in Prague 11, says the town hall after withdrawing from the ALS project. However, the company continues to rely on the public

Swimming in Prague. There is a ban in Džbán, sensitive individuals should not enter the hospitality tank

Kramář’s villa in Prague: a Czech jewel with a Russian footprint

‹ Bundesliga: Salzburg was again the measure of all things › Temporary store in San Marino, the secretary Righi: “This absolute novelty has sparked positive reactions outside the border”