Dad got drunk, Mom was desperate. Today a famous actress who falls in love with directors and has the widest smile… VIP scandals and affairs

The sequel to The Fairy Tale of the Old Bambitka, starring Veronika Khek Kubařová, is set to hit theaters. She has already played in a fairy tale, for example in Zdeněk Troška’s The Most Beautiful Riddle, where she was a princess. In Bambitka, however, she has already been promoted to queen.

But it will be the queen loser, who is inexperienced in her rule and is said to drive away any grooms. Filming a fairy tale was a pleasure for the actress: “Filming like this at the castle was a dream come true for me. Childlike. Because when we used to go to castles and chateaux, there were barricades and ropes everywhere we couldn’t go. And now, thanks to the fairy tale, one can go and touch carefully those things, those golden decorative ornaments, and it’s really beautiful, so I really enjoy it. When I first came, I really had a moment when I just stared, because it’s really incredible beauty – the ceiling, the dome, the gold everywhere and I sat on the throne, which in itself gives a person a feeling, in that space in the middle, “praised Veronika Khek Kubařová. 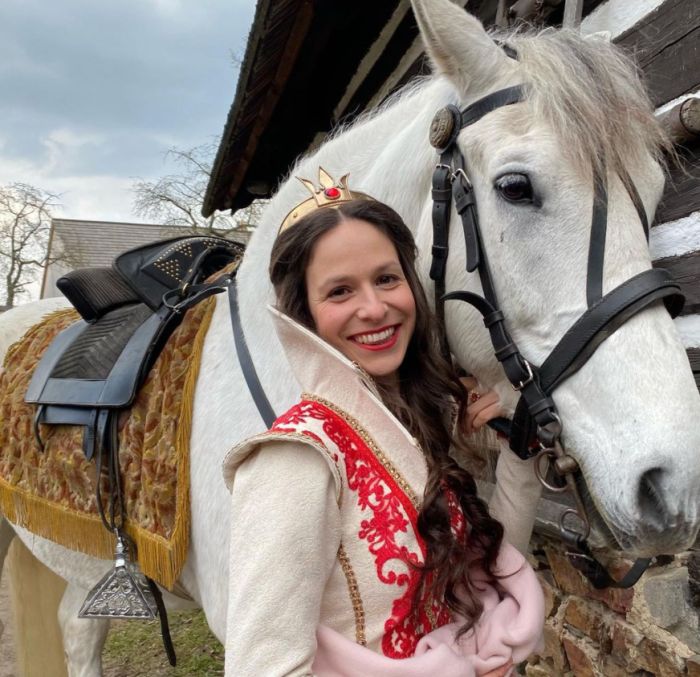 Queen Julie in The Secret of the Old Bambita 2, photo by BontonFilm

To Prague? The parents were unhappy

Veronika comes from Rakovník, she got to the theater thanks to her mother, who was an enthusiastic puppet actress, as well as her grandmother. Veronika went to a theater group from the age of eight, later to the Tyl Theater in Rakovník. She was inspired by a friend to apply to the conservatory in Prague. Nevertheless, her decision to go to Prague and study acting was not good for her parents: “Dad got drunk, Mom was desperate. But now that she sees me having a job, that I have something to do, I think it’s such a satisfaction for them. “At the conservatory, she felt lonely at the beginning and met her family. Trams XA, XB and I ran everywhere. And maybe at the elementary school, when the girls said they were going home with a three, it meant at three o’clock. Even in Prague, I originally thought that the troika tram ran the same way. I’m laughing about it now. “ 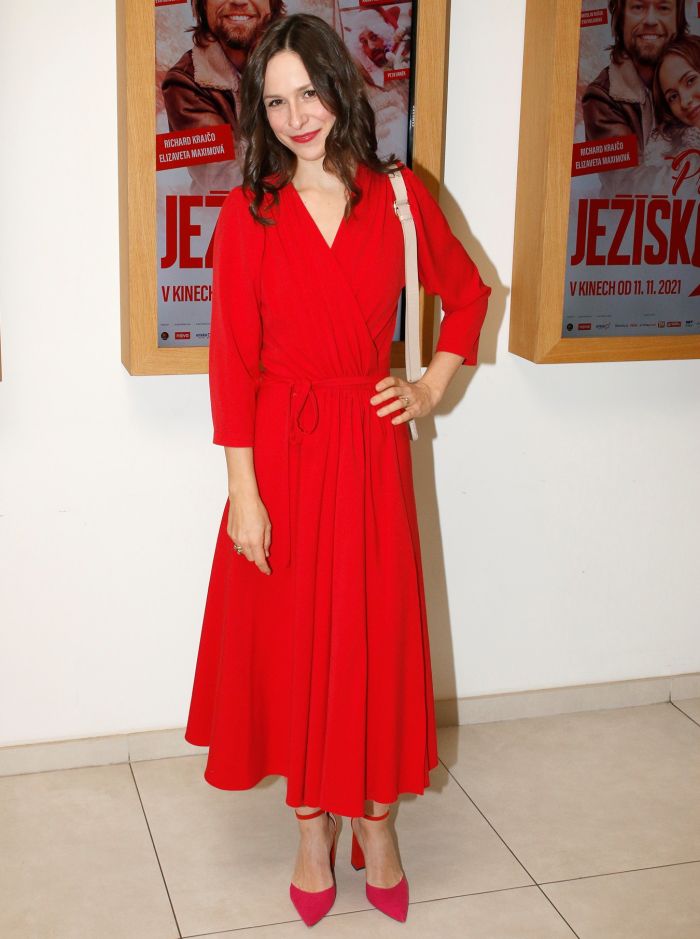 In civilian and red, photo BontonFilm

At seventeen, she got a small role in the successful comedy Raftáci: “I found a different party than the one I was stuck in. I also had my first major job. So I probably started to see everything differently from that third year. ”Another new blockbuster was the box office blockbuster Women in Temptation. She also became the benjamin of the famous Dejvický Theater, with which she also got into the series Zkaza Dejvického divadla. She doesn’t like endless series, we could still see her in Bukowski Circus, On the Water, Lady and King, Mazals, or Stars overhead. Veronika also starred in advertising for the mobile operator: “I must not be ashamed of it. It must not be embarrassing for me to get to know me on the street thanks to this advertisement. ”Today, however, people associate it far more with the victory in the penultimate series of StarDance with Dominik Vodička. 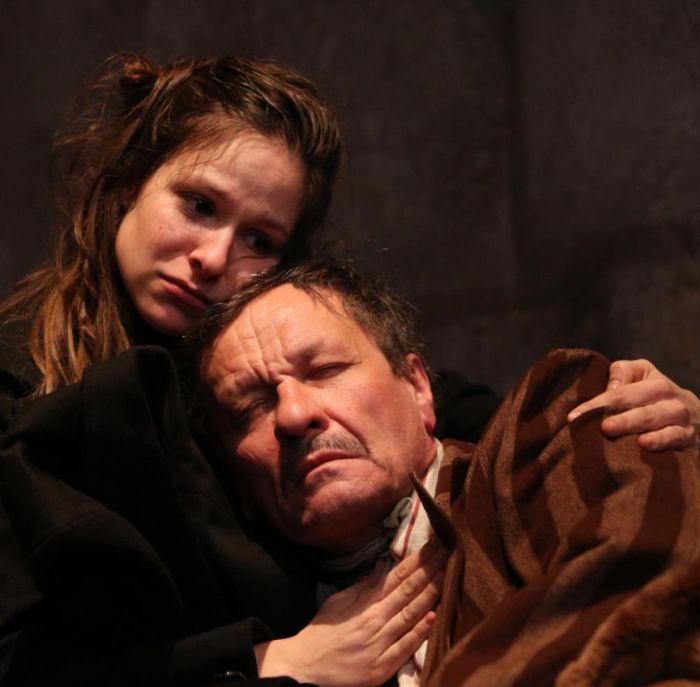 He falls in love with directors

Her first public friend was the director Karel Janák, with whom she filmed Rafťáky: “I rather held the general opinion: What does the girl want from a guy so much older? But when it happens to you, everything can be different. That it is easy to condemn such things. And I don’t solve our age difference. I take it I have a partner. If I had to think about how old he was, it was bad. ”The director is 17 years older, but it is said that it did not play a role in ending the relationship. Veronica liked theater director Pavel Khek, whom she married years ago and is still together today. No clouds in the sky are known. Veronika just vowed not to comment on whether they would have a child together, even though she said she had nothing against the children: “I am exposed to various assumptions. I’m looking forward to the kids. I want a baby, sure. But I swore that whoever asked me about it would end the conversation immediately. It is not appropriate for me to ask about the children. “

With her loved ones this year in the first minute of the New Year, photo courtesy of Veronika Khek Kubařová

Crimes are full of Czech screens. They started to give the series Badge of Vysočina at Nová and its first part was very successful, with a total of 1,425,000 spectators. The team of investigators in the Vysočina region is led by Dana Skálová (Monika Hilmerová), who is well complemented by humor winner Petr Bach (Martin Hofmann), experienced Karel Šmíd (Michal Suchánek), Vašek Kocián (Patrik Děrgel) and ambitious new team member Kateřina Vlčková (Simona Hába Zmrzlá) . 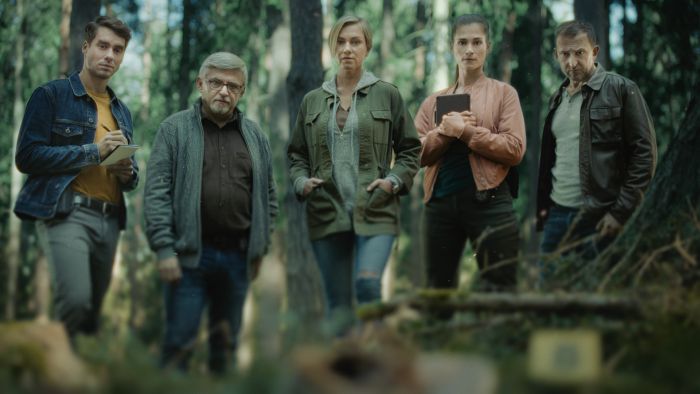 The main characters of the new successful crime series, photo by TV Nova

“Vysočina is beautiful, at the same time raw and real. In general, people stick together more. In the Vysočina Badge, we do not only monitor police investigations, we also focus on the characters’ relationships and their coexistence. Our cases concern current social problems, we are interested in people and how the individual criminal cases affect them, but mainly how to solve them together. The hope is that things will turn out well. As one of our main characters, Captain Dana Skálová, says, life brings a lot of problems, but together we can solve them, “adds Vratislav Šlajer. Another episode called Nerd Day can already be found on Voyo and on January 20 at 20:20 on TV Nova.

The team from Slunečná moves to the ZOO

He simply bets on FTV Prima for sure. After Slunečná comes the ZOO with the same ensemble as Slunečná. So Eva Burešová appears: “She is a very strong girl who has problems, debts, she is arguing with her ex-partner. During the day she takes care of the children, helps, works, and at night she earns like Lady X in the night bar, where she sings under a mask and a wig, “she characterized her character. 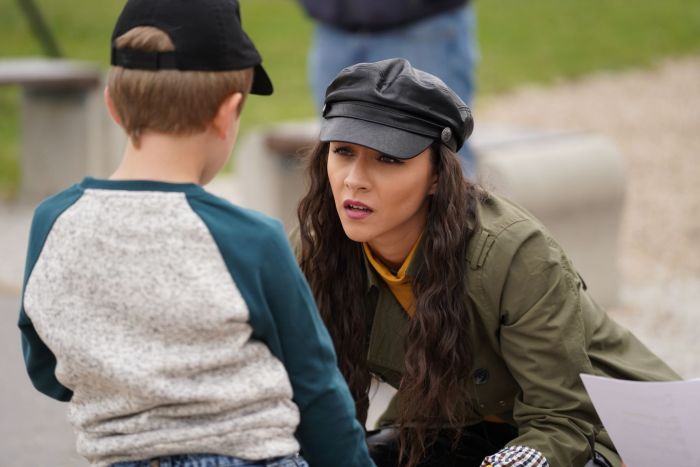 Eva Burešová in the ZOO series, photo by FTV Prima

But Tereza Brodská also plays here “I play Danuša, Judge. By the way, great, empathetic, which he absolutely loves his grandchildren. I’m willing to do any trick with them, but quite I suffer that my son, a widower, has found a new girlfriend. ”Or Lucie Polišenská:“ Eliška likes to help her surroundings. It’s just a scorpion with those guys. My mom keeps blaming me for not going, but am I disappointed? Who knows, maybe I don’t have to go anywhere and the real one will find me alone, here at the ZOO. “

Ondřej Sokol and his Romanian wife

Fortunately, cinemas are not closing, so viewers can look forward to the premiere of the romantic comedy I’ll Tell You How I’m In The Summer. The premiere is on February 17, the film, based on the bestseller of the successful writer Evita Twardzik, maps the lives of a party of people in their forties who have been friends since childhood and still meet, together with their families.

Ondřej Sokol, who plays in Tereza Kostková on his Instagram last winter, informed about the film last winter, so we know that Romanian and, of course, Slovak actors also play there. It was filmed, for example, in a cottage in the Tatras, but also in a winery or at the Bratislava Christmas markets. Ondřej Sokol has a Romanian wife in the film: “I have never had experience with a language that I do not understand, but do not understand at all. Usually, I don’t memorize lyrics word for word, but rather by meaning, and I always listen carefully to what my acting colleague tells me. In this case, it didn’t work, I had to know exactly what Andrea was saying, I really had to learn my text, because otherwise I didn’t have a chance to catch on. But thanks to this language barrier, I perceived facial expressions and emotions much more. I’ve found that you can actually catch a lot of that. “

‹ Natia opened up to the Georgians needed in Bratislava: “I was thrilled by how similar Slovakia is to my home country” › Náplavka na Výtoni: Due to the reconstruction of the road, cars will run on it