/ PHOTOGALLERY / The lessons of natural sciences and physics at the Philosophical Primary School and the Southern IV Primary School are now much more interesting. Pupils log in what kind of air they breathe and what problems the harmful air can cause them. Modern weather stations and air quality sensors, which the schools had installed as part of a pilot project, help them with this. In the winter months, it is usually the worst of the year. 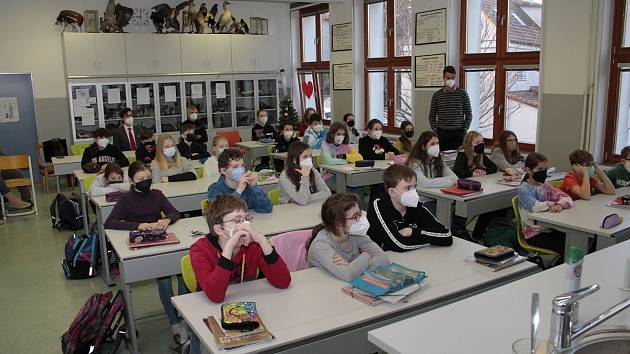 Pupils see how the whole system works and how monitoring itself can help them. “In hours, we are what the individual parts cause, what are the possibilities of reducing harmful substances in the air. The upcoming generations of climate change issues are more sensitive than previous ones, we want to go against the teenagers in this regard, “explained Lukáš Musil, co-founder of Agdata City, which provided the weather station to the schools.

Pupils monitor the state of dust particles of nitrogen dioxide, carbon monoxide and ground-level ozone directly on the school premises. If harmful dust particles exceed the emission limit values, the system automatically notifies you. The school principal may then order non-ventilation or otherwise plan the children’s outdoor activities at a critical time.

Prdlavka is unexpectedly hit. Over a thousand stickers of the new stop have already been sold

“Linking life and learning is the best way to teach. We transfer the interest in the environment from the school to the parents through the children, which is also a very important detail, “added Daniel Kaiser, director of the South IV primary school.

Record the results every three minutes

The system records the results every three minutes. According to the first measurements, the air quality differs considerably in both schools. The December results show that there is more airborne dust at Jižní IV primary school than the meters at Filosofská primary school show. Nitrogen dioxide was measured at approximately twice the amount at South IV Elementary School, exactly 225.94 microns per cubic meter. But meteorologists expected the opposite results. “Philosophical lies further from the main artery of the Spořilovská junction and closer to nature and has worse results. I don’t know yet why this is the case, the measurements have only been going on for a few weeks. It takes at least three months to settle and find out the cause, “Musil explained.

Prdlavka is unexpectedly hit. Over a thousand stickers of the new stop have already been sold

Dust particles are referred to as PM, generally the smaller they are, the easier they penetrate the lungs and the more dangerous they are to health. Larger particles get caught in the nose hair and do not cause much trouble. Particles smaller than 10 microns penetrate behind the larynx into the lower respiratory tract, fine particles 2.5 microns can settle in the smaller bronchi, and the particles can then penetrate the alveoli or the blood and cause health problems. Agdata sensors can also measure PM 1, which is even more dangerous in larger images.

Ten thousand deaths a year in the Czech Republic

According to the World Health Organization, airborne dust and associated carcinogens in the Czech Republic cause more than 10,000 deaths a year. “Pupils will learn more about the environment in which they live. In addition, they will learn simple statistical procedures and methods of critical evaluation of longer time series when comparing the results between the two schools and professional data from the CHMI station in Prague-Libuš, “described the Prague 4 councilor Tomáš Hrdinka (YES).

Measurement results from December 21, 2021 (in microns μm per 1 cubic meter)