He shouted and spoke to the nation. Praise came, but also a terrible thing. A plan to remove him from the Senate

The second highest constitutional official, the Speaker of the Senate of the Parliament of the Czech Republic Miloš Vystrčil (ODS), in his New Year’s speech for 2022, called for the construction of bridges between people, for conciliation, for a single rope. He also spoke about the vaccination and the Czech presidency of the EU, which, according to Vystrčil, is a great opportunity for the Czechia, if we use it well and at the same time in greater decency.

We wrote: It is my duty … Pushed to speak to the nation. He stopped at how the Senate wanted to oust Zeman

At the Institute of Freedom and Democracy (ISDe), where Jana Bobošíková and Hana Lipovská also work, shortly after the end of his speech, they called for the expulsion of Vystrčil from the Senate. During this year’s Senate elections.

“Autumn 2022: a chance to push out of the Senate,” the institute said in an introductory statement.

“We have just seen a New Year’s speech by Senate President Miloš Vystrčil (ODS) at ISD. Given its content, in particular the adoration of the European Union and the overuse of the word ‘right’, without the constitutional official explaining what lies behind it, ISDe considers it absolutely right to call on all non-parliamentary parties to focus on Senate elections in the constituency 52 – Jihlava. We call on them to send strong politicians in the ‘Vystrčilov’ constituency until the 2022 Senate elections. Such a political figure who will represent the interests of even the million citizens who do not have a representative in any of the parliamentary chambers after the October elections, “Jana Bobošíková explained the idea of ​​the members of the institute.

And who should win over Vystrčil in his senate district? 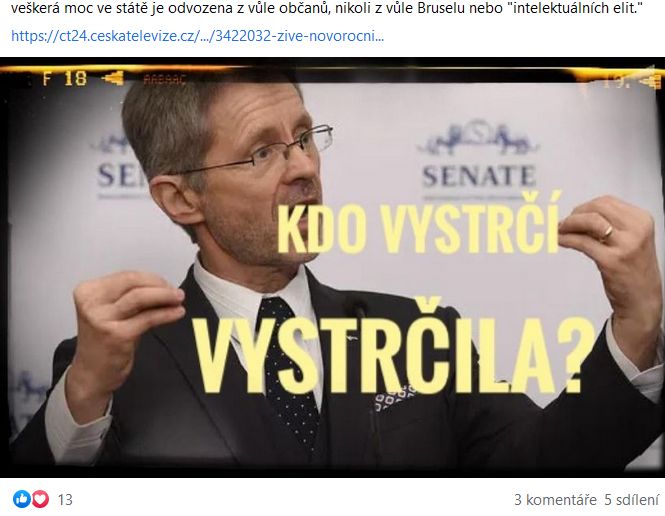 After Vystrčil’s speech, Brno lawyer Tomáš Tyl remembered the words of a collaborator.

“So Vystrčil’s speech can be summed up in the words of the council – collaborator Zedníček from the film Closely Watched Trains: ‘But we have to be happy, because we’re going to get along, okay ?!”, “he wrote about Vystrčil’s speech.

He also smiled at the final gesture of Miloš Vystrčil. The President of the Senate raised both thumbs in an encouraging gesture.

“Especially the final thumb gesture with the words ‘Let’s hold on!’ Well, I keep your teeth on your carousel, but I don’t think it will hold us long, “Tyl remarked.

Finally, he added one more word.

“PS :, he recalled the scene above the map for ten speeches: ‘The situation of our fighters for the good of all the nations of Europe, whether they want to or not, is extremely favorable … Here we have tactically withdrawn … And here is the beautiful retreat. .. Whoever just neglects his duties is ten years old or, in aggravating circumstances, even death. There is nothing that can be done, only a few Czech Sovietists think that it will reverse the course of history. But the Leader thinks well of us, he is a good Czech and he believes in providence that will not leave us. … But we have to love each other, because we’re going to get along, okay ?! ‘. “ 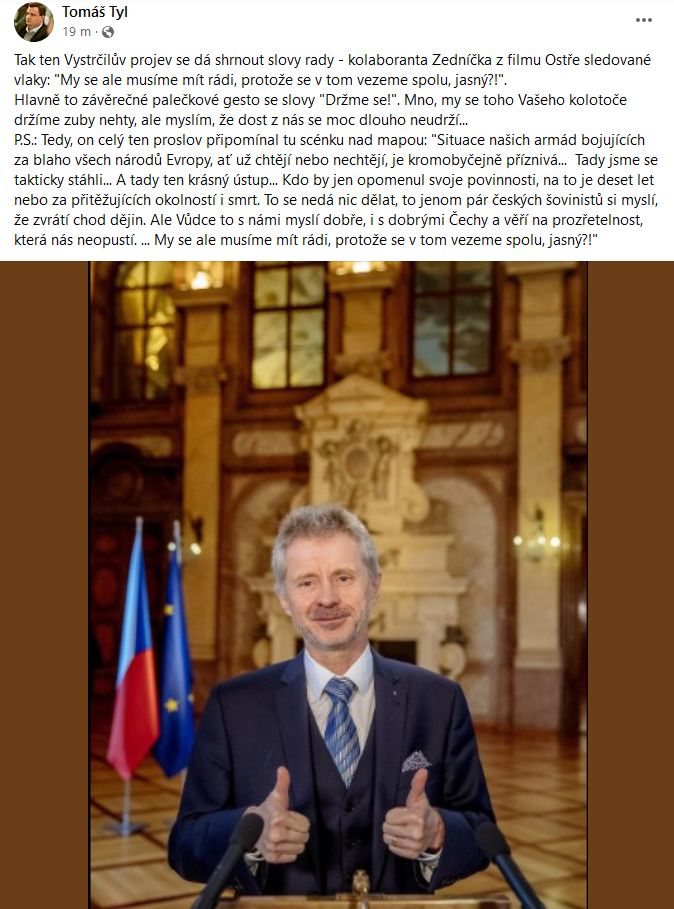 On the other hand, the journalist of the iDNES.cz server Josef Kopecký Vystrčil praised for the speech.

“I liked that the President of the Senate, Miloš Vystrčil, appreciated the solidarity and help after the tornado in Moravia and the way in which power was handed over after the elections. At the same time, his speech did not seem to me entirely like a politician’s ambition with the ambition of being the head of the entire Czech Republic in about a year and two months, “Kopecký pointed out to speculations that Vystrčil could run for Castle in 2023.

The Councilor of the Vysočina Region for Education, Youth and Sports, Informatics and Communication Technologies Jan Břížďala (Pirates) thanked Vystrčil for his speech.

“I thank Miloš Vystrčil for his New Year’s speech. A true statesman can give people hope, promote trust and appreciate some of the actions of his political opponents. Society needs to be united, not divided, and I am glad that the President of the Senate fulfills this vision, “wrote the pirate councilor.

Mr. Pavel, on the other hand, was very critical of Vystrčil and called the President of the Senate a “spineless rat.”

“The spineless rat Miloš Vystrčil preached his wisdom in a ‘New Year’s speech’. This spineless, dead-faced Vystrčil, who tried to remove the President of the Czech Republic from office, the Vystrčil, who acts against the interests of the Czech Republic, destroys the economy and collaborates, still has the audacity to cheer on television, “the debater did not take the napkins.

The QR code contains payment details, you determine the amount yourself.

Are you a politician? Publish everything you want without editing. Register here.
Are you a reader and want to communicate with your representatives? Register here.

Government appointed by the President of the Republic 17.12.2021

An actual mistake in the news? Help us fix it.

The world of doom in the open air. The Shakespeare Summer Festival attracts Macbeth

Former Ministry of Finance and President