Budapest is united! We are looking for old friends of a dementia grandmother living in Újpest

The 80-year-old lady desires nothing more than to embrace her old friends again. However, they disappeared into the whirlpool of life. In addition, the aunt only remembers their first name, as she suffers from dementia as a result of her bent age.

A heartwarming initiative has set in motion on Facebook. A young woman asked for help in a group in Újpest that she wanted to surprise her grandmother by meeting her old friends again. Her grandmother, who is already struggling with mild memory problems, will soon turn 81 many times, telling her about old people she likes lately – and she wants to bring the “big encounter” together. The Metropol, as the voice of the street, will help you in your search this time.

They band together with their mom to maintain her memory

Mrs. Lászlón Kamarás Until 1996, he worked with his best friends at the time in the Champion restaurant in Újpest. The grandson, Andrea on this crumb of information he set out to search for his mama’s acquaintances a quarter of a century later.

“I have a very good relationship with my grandmother. He and my 3 month old baby girl are going for a baby swim“Andrea Kertész told our paper. – “Unfortunately, mentally there is no topon, but he is very active. We “band” a lot together, in which case we tend to tell stories about the past to keep my brain maintained. We all hope we can slow down the deterioration of our memory in this way. He has mentioned it many times lately Rent and Peter. He didn’t remember their full names, but he did remember how much he loved them. The restaurant works like a small family. He also mentioned their boss, Aunt Marika. “

Andrea Kertész and Rozália used to band together / Reader’s photo

I had two close friends, but unfortunately I didn’t

Since he could not find his former friends on Facebook based on their first names, Andrea is the Úin the jpestiek group asked for help. “We were looking for Irene and Peter who worked with Mommy before 1996 at the Champion Restaurant, my grandmother was the cook, the man was synthesized and Iren was working at the counter. At that time, all three of them still lived in Újpest, ”said the call. As a result of the post and Metropol’s first article, with which we also embark on the search, Andrea soon found people who knew the two old friends, but sadly learned of them that they had both passed away a few years ago. 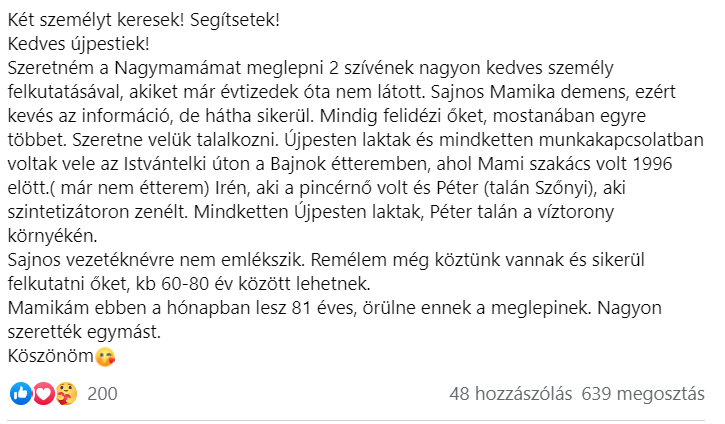 “Aunt Irénke passed away about 8 years ago and was Crohn’s ill. We made contact with her ex-husband, whom I even remembered because she courted Irene in the early ’90s. I also met him as a small child in the restaurant. “

To Andrea later To Peter they also managed to track him down. The man had previously worked as a porter in the post office and played music on weekends, but in the meantime he also passed away.

“I told Mommy with a heavy heart what had happened to her friends. He became sad, mourning them, but many good wishes from the Internet kept his soul in him. Hundreds comforted himSaid his grandson sensitively. – “We were determined then that the search could not end like this and we would not give up! Aunt Marika, their former boss may still be! “

The Champion Restaurant was very cool in the early 90s. Grandma told Andrea a lot about it yet Schütz Ila also went there. The actress loved her stew very much, she always brought the daily menu from there.

“There may be more people between the ages of 60 and 80 in Budapest who went to the Champions and got to know their grandmother at a young age. Later, after the Champion, he worked on Váci út in the ampule factory as a lathe operator. Please write in the Metropolis that if anyone still remembers him or Aunt Marika, they should report! It would make mom very happyAndrea said hopefully.

So dear Readers, if anyone is known in person Mrs. Lászlóné Kamarás Aunt Rózsi, as a maiden name Roshalia of Beskovsky, let us know so we can make “mommy” happy.

“I have already started researching, I found her husband Zsolt in the social media and I wrote to her, but she has not reacted to her yet, she is also an older person,” he told our newspaper. Andrea.

The murder of György Döcher: the suspect was transferred from Germany to Budapest

Budapest will not veto the World Championships in Athletics, because according to Christmas the government released Fudan