What will Prague look like in twenty years? look at

“Prague’s priorities are a model selection of twenty-five interesting projects that are transforming the expression of Prague as we know it today. They show us the internal reserves of the city and its potentials, “describes the exhibition Ondřej Boháč, director of the Institute of Planning and Development of the Capital City of Prague.

The projects that the exhibition presents vary in size and are located in different parts of the city. They have one thing in common, most of them are city investments. The exhibition is divided into five parts – new districts, squares, parks and opportunities and connections.

See some of the projects that will change Prague in the following gallery:

The capital is involved in a number of problems, one of the most pressing being, according to Mayor Zdeněk Hřib, the unavailability of housing. “Therefore, I see the largest brownfield, ie Bubny-Zátory, to be open for the construction of the city as a fundamental topic of the city’s development,” adds Zdeněk Hřib.

Deputy Mayor Petr Hlaváček, on the other hand, mentions plans for the possible construction of a new philharmonic building, which according to him could become a symbol of 21st century Prague.

“Therefore, in order for these very beautiful projects to be supported, the task is to secure funding, which is especially difficult in these difficult coronavirus times,” said Pavel Vyhnánek, Deputy Mayor for Finance and Budget, noting that his positions face two challenges.

The first is cooperation with the state. “In this case, I hope that Prague will show its friendlier face and acknowledge its specific position. At the same time, I expect that it will face the co-financing of some of the projects, “added Vyhnánek, adding that he expects the state’s financial participation, especially in the project of a new metro line.

“I see it as fair in the way in which such an important infrastructure is being financed in neighboring Austria. One half of the investment in the metro in the capital goes to Vienna, the other to the state, “explains Vyhnánek.

In connection with the situation that arose as a result of pandemics and tax representatives, Prague lost 12 to 15 billion crowns. 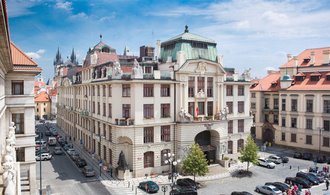 ‹ Prague has its own developer. The position will be taken over by a real estate expert › The Prague-Holešovice railway station is celebrating its anniversary, it opened 35 years ago