In Grasse, we plant a tree for each child born in 2022

The “one birth, one tree” operation takes root in Grasse. The planting of plant species has begun.

Last Friday, the pupils of a class of CE2 of theSaint Antoine primary school rolled up their sleeves on land adjoining the penetrating Cannes-Grasse, chemin des Castors. The plot of 2,500m2 was made available free of charge by the Alpes-Maritimes department.

Symbolically, the children planted about twenty shrubs, beeches, maples or olive trees selected from the Aspres nursery. In total, more than 300 plants have already taken root. A term, 575 trees will reforest this space.

It’s good for the climate and biodiversity

The project, led by the town hall of Grasse and Veolia, in collaboration with the Pays de Grasse Urban Community, were announced last September. It consists of plant a tree for each child born in Grasse during the year. This is the French company Reforest’Action, a specialist in reforestation, who was appointed to pilot the system. The stated objective of the municipality is to create a micro forest in the city with a view to greening our spaces and bringing more nature to the urban environment”. 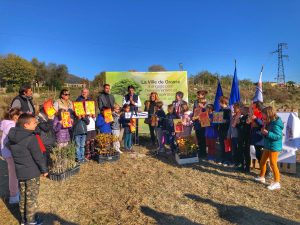 ‹ Russia and Myanmar signed a Memorandum of Understanding in the field of cooperation in the field of scientific, scientific, technical and innovation activities › Near Toulouse: the restaurant employee robs the manager and steals €25,000 in revenue