/PHOTO/ FA Šubert Theater Society performed in the Valdštejnská Garden in Prague and the audience had a great time. 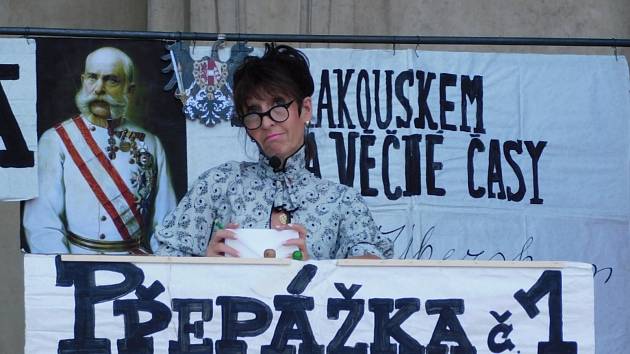 From the performance in Prague.

“Thank you for the way you represented not only Dobrušska, but the whole of Dobrušska in Prague. I also thank you for devoting yourself to culture in your free time, for giving so much of yourself to the theater,” said Senator Jan Grulich during an informal meeting shortly after the end of the theater performance Eagles in the Pond, which members of the FA Šubert association performed on Thursday, August 18 in Thursday. Valdštejnská garden in Prague as part of the Valdštejnské summer in the Senate cycle.

It was he who initiated the expedition of the Dobruš volunteers to Prague, and in his own words, he connected with FA Šubert, the first director of the Zlatá Kaplička, who is said to have even sent trains of Thalia supporters to the metropolis.

The dominant feature of the Valdštejnská Garden – the sala terrena, a monumental open structure with beautiful fresco decoration, completed in 1629, which did not have a palace garden at the time of its creation, became the stage for the historic two-act melodrama. Playing in such an environment is something absolutely extraordinary and the actors were aware of it.

Jiří Raichl, the author and director of the play loosely inspired by real events, could have been, and indeed was, extremely satisfied with the performances. Everyone enjoyed their roles, big or small, and the almost full auditorium, which included, for example, Senator Pavel Fischer, had a great time. Of course, the overall impression was enhanced by the already completely routine support of the viewers of the “invisible” technical staff.

The play had its official premiere on October 5, 2020, and its story concluded in the senate garden. The official derniere of the “eagles” turned out to be excellent, and hats off to everyone without exception.

‹ We don’t have much green space inside the city, one day the problem will start screaming, says Petr Ryska from Prague unknown. He walked the entire capital › The repair works of the electric cable connecting Lithuania and Sweden are postponed for two months