Prague 2 and plans: The most modern home for the elderly, for the smallest paddling pool

Symbolically, at 12:22, Prague 2 started the project Year Two. It will be a year-round “series” various events, which are intended for all generations. The first one is already underway. She has an outdoor panel exhibition on Peace Square.

“It simply came to our notice then The imaginary center of Prague 2, “Said Mayor Alexandra Udženija (ODS). It is no coincidence that the building of the Vinohrady town hall stands on the square, which according to the mayor “one of the most beautiful places. Prague 2 is the vibrant and harmonious center of the metropoliswhich is home to about 50,000 Praguers. “

It is intended not only for the outdoor exhibition with 12 panels, which lines the area in front of the church of St. Ludmila. In an informative form, it presents Prague 2 – from the most basic information after various attractions; for example, who are the honorary citizens of Prague 2, what are the opportunities for leisure activities, how is it with the cleaning of public space or what awards the office has received in the past.

These are, for example, prices Golden coat of arms or awards for Friendly office. “The prize I value most for the office is the title City for business, which we won, “said the secretary of the town hall Michal Kopecký. “The highest honor we could expect is the City for Business of the Decade award.”

The exhibition, which will be on view until March 22, brings closer the past and present of Prague 2. “We had about 1,000 photos available to organize it“Kopecký said. “It was difficult to choose just a few of them for exhibitions. But if we used them all, we could plant panels all over the square. ”This is how the exhibition ends prospects, where the last panel presents selected projects that should soon be transferred from paper to the streets of the metropolis. Which are they?

Park and home for the elderly

First of all, it ‘s about new park Horská, which should connect Albertov with Folimanka. It is planned along the Nové Město castle at the end of Horská street near the park Ztracenka. “The results of the architectural competition are currently being evaluated,” the mayor said, adding that the project was still at the very beginning and it is difficult to estimate when the park could actually emerge.

another big project is supposed to be “Visionary” center of social and health services for the elderly, which should contain up to 130 beds and highly professional care. “It will also be provided for people with a certain type of dementia,” the mayor notes. “It simply came to our notice then the newest home for the elderly in our countrymoreover, with a view of Prague Castle, which in addition it will not be in the hands of private individuals, but will remain in the possession of Prague 2so there will be a certainty that clients will receive the best care at affordable prices. ”The estimated price climbs to half a billion crowns.

The concept of the so-called New Home is based on the form of separate units – households that can inhabit up to 12 seniors. It should arise in Italská Street, where they will replace tennis courtsand Prague 2 cooperates with General University Hospital. “We have been preparing the project for 5 years. However, we have applied for a zoning decision and this year we could hopefully select a construction contractor. I hope that implementation will begin within two years. “

However, Prague 2 will share some projects with “names” this year. “It will be about leisure area in Folimanka Park, which will be under the Nuselský Bridge. He will have it barbecue rental, small library, space for pétanque or yoga and in the winter we will fix the ice surface there, “the mayor told Blesk.cz. Until now, the town hall has provided mobile ice rinks, but it should be permanent in Folimance. The implementation of the complex should take place this year in August.

It should be established in Čechovy sady later this year paddling pool for the youngest children. “It resulted from discussions with mothers who sensitively miss the paddling pool in Prague during the summer months,” Udženija said.

The budget for Year Two is approaching two million. “We plan too many actions. It also includes those that take place every year, “The mayor revealed. Vinohrady City Hall intends to attract Praguers cultural, social, competitive, gastronomic, leisure and sporting events. “Everyone will find something on them. From children to seniors. “

Prague 2 used the magic date, which by the way is also palindrome – it is therefore possible to read it backwards without changing its meaning, completely. In addition to the exhibition on the same day, she also organized awarding honorary citizenship to selected personalities of Prague 2, and at 20:00 on the large screen on náměstí Míru she planned the premiere of a roughly ten-minute documentary about Prague 2. “AND at night 22. february at 02:22 we have launched a new town hall website, “the mayor boasted.

Cooperation with other “Twos”

Prague 2 is not the only numbered city district that has a “two” in its name. Cooperation they did not plan with the others in Vinohrady. “We did the project ourselves, but if we have the opportunity to mix some activities, I will be very happy if the citizens of Prague 12, 20, 21 or 22 also visit Dvojka, and I will be glad if our citizens also visit another of the events from the other town districts of Dvojka“She concluded.

The city district, which is twice “binary” in Prague than Prague 2, intends to honor this year not by its example with various events, but by planting trees. “We are going to recover the tradition of planting double trees so that they can lean on each other. It used to be the custom for crosses, bell towers and chapels so that people could meet with them, ”Veronika Blažková, a spokeswoman for the City Hall of Prague 22, told Blesk about this year’s plans. 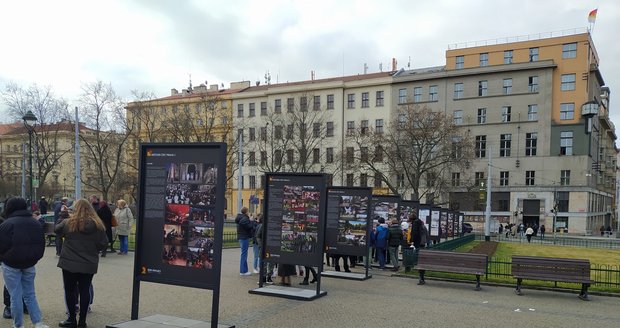 Prague 2 launched the project Year Two at a symbolic date of February 22, 2022 at 12:22. It will consist of a number of thematic events. The first of them is an outdoor exhibition dedicated to Prague 2, which can be seen on Peace Square.