A burning bus closed the D1 motorway to Prague. No one was injured in the fire 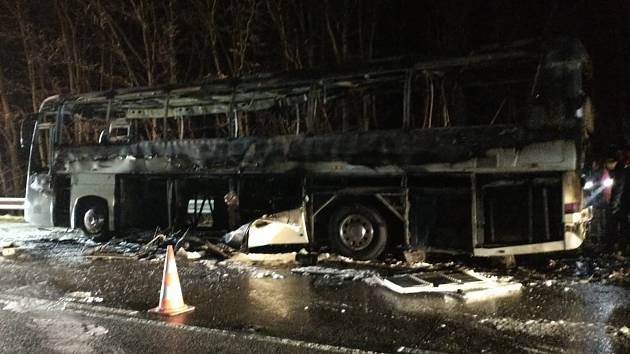 | Photo: Police of the Czech Republic

The fire in the halls in Mladá Boleslav is extinguished. The damage will exceed one billion crowns

According to her, the passengers managed to get off the bus also thanks to solidarity. “Another bus was driving in the same direction, whose driver stopped and helped the passengers,” the spokeswoman added.

“People were standing there and it didn’t look like anyone had a health problem and needed help; she also stopped some cars, “a co-driver told the Diary from a car that was passing the place of the fire just on the way from staying at the cottage. “I think we were one of the last to pass. The bus already had an interior in one flame and the fire was radiating directly from it, “she stated. “I’d say the bus looked a bit like a tour bus, but I don’t know exactly; it was only a moment before we passed, “she stated.

CENTER. BOHEMIA: Drivers ATTENTION! We are intervening with other IRS units on the D1 motorway, where the full range of buses is burning for 42 km in the direction of Prague. They are all outside and should be unharmed. The highway to Prague is now completely closed. #policiestc

Due to the intervention of firefighters a kilometer before exit 41 Šternov, the police officers temporarily closed the motorway in the direction of Prague to 49 kilometers – with a diversion of traffic in Vlašim and the possibility of returning to the motorway near Divišov. A column formed over the site of the closure. At half past seven in the evening, the two-lane highway could be resumed.

Circumstances of fire of another investigation.

Global outage of the passenger check-in system. Problems are reported by Prague, London and Sydney