The cooperation between TOP 09 and STAN is small. The combined forces for Prague are in danger of divorce

He draws ammo for leaving the current coalition from the results of the elections to the Chamber of Deputies, where the Spolice coalition won around 40% of the vote in Prague.

TOP 09 and its current partners differ on a number of key issues in Prague, especially in the area of ​​transport. He does not want to introduce a toll for cars entering the center and wants to complete the second runway of Václav Havel Airport, which, according to STAN, will significantly increase the number of foreign tourists in the city and make life uncomfortable for people living near the airport. The groupings also differ in their views on the decree on urban greenery, which, according to Pospíšil’s interpretation, regulates the movement of dogs in the city.

“We are diverging from the topics, STAN is more of an activist. The center should not be closed to cars, we should go the way of modern technology and not restrictions. We are also reserved in the issue of cooperative housing. We are closer to the ODS programmatically, I consider the Together project to be successful, these are the two main reasons. I will vote for him, but our internal party debate will decide that, “said Pospíšil. However, according to him, the date of the decision is not set and personnel issues did not come up.

The petition calls for watering dog puddles. Are we going to walk with the bottles in our hands?

Nevertheless, the chairman of the Prague organization STAN, Petr Hlubuček, would like to continue his current work. And I evaluate it positively. “We have a lot of joint projects ready. Last Sunday, we talked about the possible continuation of cooperation as one of the variants that TOP 09 has, “said Hlubuček.

According to them, they offered their political partners parity cooperation, that in the event of electoral success, they would share the seats equally and agree on a common mayor. “We do not insist that he is from STAN. Someone above the party would be suitable, we have a lot of experienced people, such a person will not be a problem to find, “I think Hlubuček. “At the moment when TOP 09 would go with Together, we would go to the elections as STAN separately,” says the chairman.

“We have enforced the city’s climate plan, without TOP 09 we would not have been able to. I do not see any contradictory topic that would split us so much that we could not cooperate in the next elections. Our voters overlap, “says Hlubuček. However, he ruled out, the topic of this or the next coalition will be the introduction of tolls

In the meantime, the Prague ODS presented its campaign called Prague on the Head. He wants to flood billboards and an LED screen around the city with her, and she doesn’t want to miss her main goal – to get the mayor’s post.

According to behind-the-scenes information, the Spolu coalition offered a 7: 4: 1 ratio of candidates on the Prague platform in the order of ODS, TOP 09 and People’s Party. The leader should then be the ODS candidate. 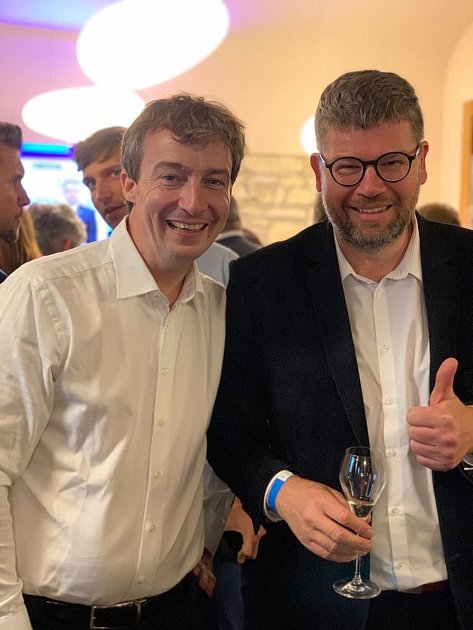 Jiří Pospíšil (TOP 09) and Tomáš Portlík (ODS).Source: TOP 09 archive“Parliamentary elections have shown that cooperation with TOP 09 makes sense. We are close to them programmatically and ideologically, we are ready to go into a coalition with them. We are talking about who could be the mayor, but we are more talking about what we would like to achieve, “said Tomáš Portlík, chairman of the Prague regional association ODS and mayor of Prague 9.

“It is a pity that Jiří Pospíšil did not use the opportunity to run the city executive and I hope that in the new coalition he will seize this opportunity and fix it. It is fair for him to manage with the current coalition and for us to have a coalition partner in it in the future, “added Portlík.

Public lighting will become more expensive in Prague, so the sights will shine for a shorter time