Sor from Baník to Sparta? Fans disagree. Unless abroad and beyond, he says

/ PHOTO GALLERY / A real wave of resentment was caused by fans of Ostrava’s Baník at the end of last year, the news that football wing Yira Sor is in the sights of Prague’s Sparta. According to Deník, the club from Letná was to offer up to 30 million crowns for a 21-year-old Nigerian express train, plus a 15% share in its next possible relocation. Hitchhiker David Lischka, who is currently a guest at Bazaly, could also be part of the exchange. 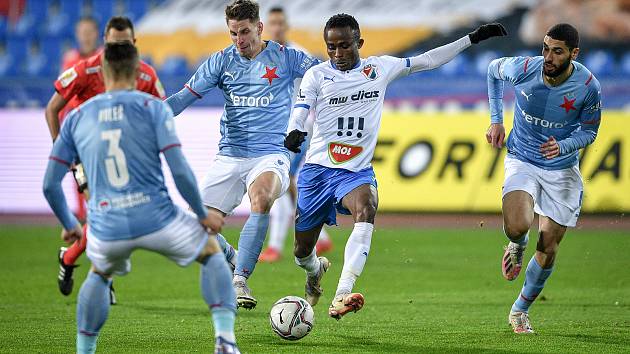 Match of the 19th round of the first football league: Baník Ostrava – Slavia Prague, 19 December 2021 in Ostrava. (center) Lukáš Masopust from Prague and Collins Yira Sor from Ostrava.

As soon as the information about this possible transmission on the Ostrava – Prague route appeared on the air, the fans of the Silesian club were clear. “Classics. As Baník begins to rise, they begin to rise again. Praise the people of Prague so that they do not step on their heels, “said Robert Kuboš, for example, at the link to the article on the Facebook page of the Moravian-Silesian daily.

“If Baník is to play the top, he must be able to keep the player. If a lucrative offer comes, only abroad and not strengthen the competition, “he added clearly to the networks.

SEE: Baník fans in 2021? Behind the gate, on the hill, Pasta in the stands

“30 mega little. 45 otherwise hello, “said Lukáš Adamík resolutely. “Not to sell at all,” Pavel Vevjorka added with a few exclamation marks. “I hope that Brabec makes sense and will sell it far more in time and abroad,” support their colleagues Milan Sikora.

“In any case. The price of Sora can be three times higher elsewhere in Europe. It depends on how you will continue to work with it, “the user Radim Radas began his reasoning.

“What’s worse is that Lischka is in favor of a good deal here in Baník with an option, which was confirmed by Grussmann himself (Baník’s sports director). And Sparta will play on that and calculate a bit. And in the summer, Slávka is going to address Almási’s second attempt, but Baník wants 80 mega, which fortunately Slávka won’t give, “Radas continued.

PICTURE: Emotions of joy and sadness. Wins and losses of Baník in 2021, look

“Especially now is the time if the whole Baník wants to move, he must not sell, but keep the staff. Otherwise, it will be the same as every year and it will be trampled on, “he added.

In a similar vein, reactions were seen on other pages of Baník fans, where information appeared. Some likened the possible transfer of the young African to Miroslav Matušovič and other ex-bankers who headed for Letná in the past. But Prokop Hampl had a different opinion than most. “30 mega + 15% is quite enough,” he wrote.

The fans are clear about the matter, so we’ll see how the whole thing turns out.

‹ He makes place at 96: Paderborn confirmed conversations with Florent Muslija › Salzburg air rescuers had 3345 missions in the previous year – again a slight decrease