Generous Praguers: They bought over 25,000 chickens and 705 goats in the metropolis

It is quite a well-known fact that people in the Czech Republic, including the people of Prague, are in favor of various collections and helping the needy. It is interesting to see what donor customers bought last year at the People in Need e-shop. In short – goats, toilets, super power for girls or beehives. 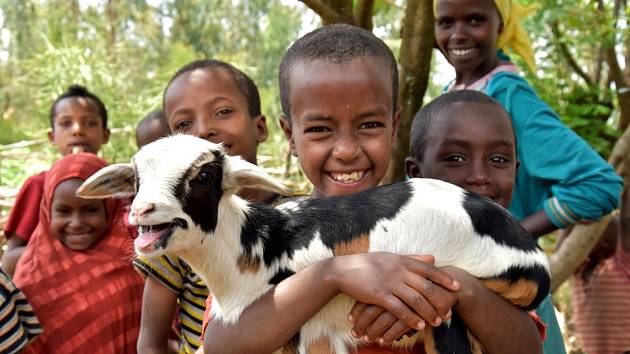 In 2020, the people of Prague bought education for the needy and livestock.

People in Need has published web statistics skutecnydarek.cz and it follows from them that people from Prague bought 278 toilets, 705 goats and 205 safe births for the Skutečný Dárka e-shop. Part of the money raised was used directly in the capital – thanks to contributions, 150 Prague children could be tutored.

“Goats and chickens fly a lot in Prague, as in the whole country. But other, sometimes quite non-traditional gifts are also sold. Last year, for example, 14 million bees (234 hives) flew out of Prague, 6,391 children received school supplies and 132 girls were able to gain unsuspected superpowers thanks to the education provided, ”describes Tomáš Urban from People in Need. By the way, over 25,000 chickens were sold.

Mysterious poems are spreading in the metropolis, the PRAGUE! enlivens the city space

People from Žižkov, Vinohrady and Malá Strana tend to be very generous on the e-shop, according to the data. This year, until the end of November, Real Gifts for 240,000 crowns were sold in the capital. This number will increase significantly, as up to 80% of gifts will be bought by people just before Christmas. In total, people from Prague lost almost 53 million crowns in the 13 years of the Real Gift. In the past, the most generous of them bought gifts for about 180,000.

Although most gifts go to third world countries, some remain in the capital and are aimed at supporting children’s education. “We tutor about 150 children in Prague and we have about 140 volunteers at our disposal. This year, 50% of them tutored online and 50% in person, “says Václav Kučera, director of the Prague branch.

One of the students who received support was Markéta. She studied high school for the hearing impaired in Prague. According to Jan Jelínek, who devoted herself to her during her studies, she managed to deal heroically with the school, despite the fact that it was not easy at all. “Markéta lived with her mother and brother in a dormitory, which was also quite far from the school. She spent a lot of time commuting every day. In addition to her studies, she also had to deal with a debt school for accommodation that her mother had not paid before. At the age of eighteen, she had to start repaying it herself, “Jelínek explains.

Despite the difficult situation, Markéta managed everything. She was preparing for school, she had nice results, the teachers praised her. She wanted to become a teacher, after high school she applied to study special pedagogy in Brno. The entrance exams were no longer successfully passed, so he does not continue his studies after graduation. But according to Jelínek, she is determined to graduate from her dream school and try again next year.