November 15: temporary changes to waste collection in Siena and Sovicille

SIENA. Next Monday, November 15, on the occasion of the visit of the President of the Republic at the inauguration ceremony for the 781th academic year of the University of Siena, Sei Toscana will adopt some changes to the waste collection service in the municipalities of Siena And Sovicille, in accordance with the directives of the Police Headquarters.

Specifically, on the day of Monday 15 November, In the historic center of Siena, door-to-door gathering will not be conducted in the streets faced by the path of the presidential procession: Porta Ovile entrance, via Vallerozzi, via degli Orti, via del Comune, via dei Rossi, piazza san Francesco, via Abbadia, via della Stufa Secca and via Garibaldi. There Door-to-door collection will not be conducted in the town of Sovicille.

Furthermore, always on the day of Monday 15 November, for reasons relating to public order and security, i baskets and the Roadside collection points along the route affected by the passage of the presidential procession will be temporarily closed and not usable by users. 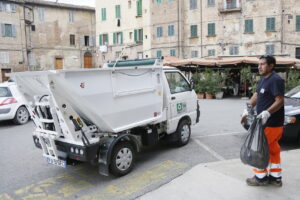 Trusting in the collaboration of citizens and activities, Sei Toscana recommends to respect the methods of conferment indicate.

THE MAGIC RETURNS “, THE HOLIDAYS ARE ILLUMINATED IN SIENA