During the live show “Conversations with Citizenship” of the portal Pilietybė.lt, Auksė Motto, Chairwoman of the Education Council of the Lithuanian Lithuanian Community, shared the following comment: “In September Lithuanian citizenship and must return passports. “

She also shared 2021. September 7 Order No. signed by the Minister of the Interior 1V-713, by which 52 people lost their Lithuanian citizenship because they acquired the citizenship of another state. 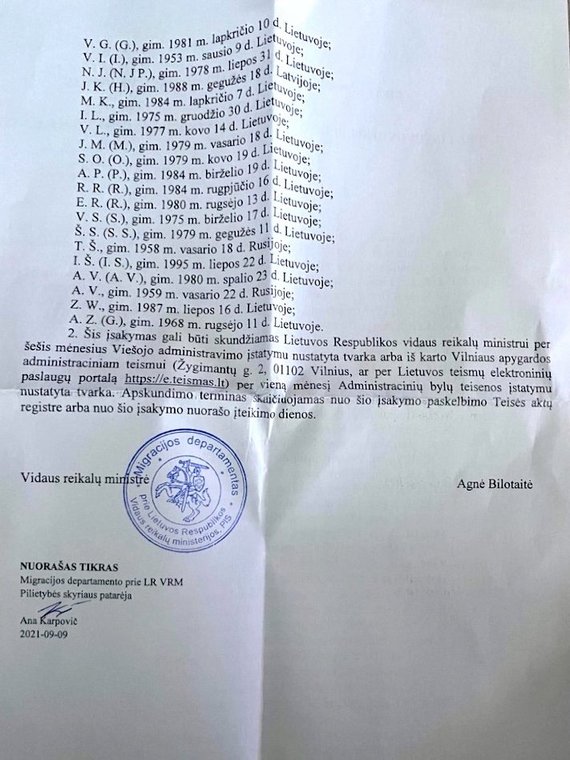 The Pilietybė.lt portal succeeded only with the persons in one of the mentioned documents, who agreed to share their experience anonymously. In order to protect the identity of a person who has agreed to share a painful story, the text will contain the general words “person”, “man” and “Lithuanian”.

This has never been reported anywhere a person has acquired the citizenship of another state.

A Lithuanian family was created behind the Atlantic

A man born in Lithuania and acquired Lithuanian citizenship by birth to the portal Pilietybė.lt that he left for the USA more than twenty years ago. He just graduated from the Atlantic, holds a senior position in an American company, but also started a Lithuanian family: he married a Lithuanian citizen met in the USA, raises a child together, takes him to a Lithuanian school, supports it, and actively participates in the Lithuanian community.

“I felt like the ground was slipping under my feet”

The Lithuanian told the portal Pilietybė.lt that he accepted US citizenship by hanging on: “After graduating from America, an opportunity opened up for finding a good job and moving up the career ladder. It was important to work well, to show what you know and do all the work responsibly. Working honestly and diligently, I have earned the respect and trust of managers, who can get higher positions, to start implementing the company’s projects in America. But to achieve that, it was necessary to have American citizenship. “

And one Friday in September, after a work evening and a fairly successful week, was hit by a homeland.

I look inside the envelope – it has another folded sheet that says that I am being deprived of Lithuanian citizenship.

“I joined to view the post office and an open envelope caught my eye,” the Lithuanian told the Pilietybė.lt portal. – Without waiting for anything, I tore open and, after reading, I did not immediately understand – a long list with the initiative, dates of birth and written deprivation of citizenship. I look inside the envelope – it has another folded sheet that says that I am being deprived of Lithuanian citizenship. I felt like the ground was slipping from under my feet.

Why are Lithuanians deprived of citizenship? Why are we being removed from the list of insiders? I have become a stranger to Lithuania and everyone on that list is already a stranger. 52 people. And so much has been said and written that Lithuanians in the world are one Lithuania … ”

“Lithuania is my home – a port of peace”

He became the only member of his family without Lithuanian citizenship and told the Lithuanian portal Pilietybė.lt that he never left Lithuania.

“I have many relatives in Lithuania with whom I maintain close contact. My family and I return to Lithuania every 2-3 years and spend 3-4 weeks each.

For me, Lithuania is home – a port of peace. Whenever we return to Lithuania with my family, we see how it is becoming more beautiful and changing. We travel around Lithuania and for everything, when we can return to it forever. But now we will see what the future parodies…, ”said the Lithuanian, who was left without his native citizenship.

“Sorry, you are a Lithuanian citizen”

Man did not hide that it is both painful and sad, and at the same time angry: “Lithuania and its people are not to blame for the games of power. However, it is angry that Lithuanian politicians do not understand how important it is for people living in other countries to preserve Lithuanian citizenship. “

Although left without his native citizenship, he does not lose hope that the law, which causes great pain to many Lithuanians and does not respond to Lithuania’s interests in today’s world, will be changed.

“I really still hope that in the current government, lawyers, members of the Seimas, who will dare to change the law and can preserve citizenship. After all, the amended law would save more than a million Lithuanians. After all, no matter where you live, a Lithuanian will always be Lithuanian. It is very important for me to be Lithuanian – I was born Lithuanian and I will die Lithuanian, ”said the current Lithuanian citizen, who is a former citizen of the Republic of Lithuania.

I really still have hope that lawyers, members of the Seimas, who have dared to change the law and preserve citizenship, will come to power now.

“I continue to live in the hope that one day I will receive another letter from the Lithuanian Migration Department -” Sorry, you are a Lithuanian citizen, “the narrator concluded.

The Citizenship Act is based on the 1989 realities

After the restoration of the independence of the Republic of Lithuania, the issues of Lithuanian citizenship were resolved in accordance with the 1989 November 3 adopted citizenship law. Subsequently, three amendments to the citizenship laws were adopted, which entered into force in 1991, 2003 and 2003. and 2011 Photo from the Migration Department / In what cases is multiple citizenship possible?

The fruits of the law are minus three citizens every day

As the portal Pilietybė.lt in 2021. October 8 The request for the loss of citizenship was answered by the Deputy Minister of the Interior Arnoldas Abramavičius, in 2021 786 people lost the citizenship of the Republic of Lithuania. True, October 12th. and 14 October. The Minister signed three more orders, the citizenship of which was lost by 123 people, the absolute majority – born in Lithuania.

In less than ten months of 2021, Lithuania lost 909 citizens. More than three people every day.

The fruits of the current law on citizenship of the Republic of Lithuania: in three years – minus three Lithuanian citizens. every day.

When there will be no cash left: although Europe is considering 1-2 cent coins, there are no ambitions for banknotes

Lithuania lives like Sweden in 1990: explained why there was a crisis in the good life

‹ Robbery: Police took 21-year taxi robbery festival › The autumn vacation ends tomorrow in Hesse: the virologist calls for an extension of the prevention