Kateřina Marie Tichá waited a few years for her first album. In the same way, his baptism did not take place immediately, it took place in Malostranská beseda a year and a month after its publication. However, the audience knew the album “Sami” word for word, and the filled space became a magical concert. More about him in our report.

Tereza Balonová had the task of warming up visitors. This time she did so only with her guitar without a looper, but it was still a pleasant half-hour, which again reminded me of the talent of this musician. Some Friday has passed since the EP “Turn off the day”, so it would be nice if Tereza developed the mentioned talent in a full-fledged album. She also timidly promised that – we should wait in February. Perhaps it will work, because the novelty “I”, which she dedicated to the main star of the evening, lured more than well.

At nine o’clock in the evening, Kateřina and Bandjeez took the stage to the podium. One would think that playing “Dancing Together” is quite useless after many years, but the band members proved to be very skilful musicians at the very beginning of the setlist and spiced up the merry bouncer with rock, which raised it at least to a higher level. Tiché was in perfect harmony with Bandjeez perfectly all evening, not only musically but also humanly. Together with dances, jokes and stories, they approached the audience immediately. Their collaboration has already brought the first song fruit – the as yet unnamed composition, which they played together for the sixth time, including the soundtrack, also marked another bright promise for the future. This pobandjeezovsku the sonorously dense position also suited the singer’s set-to-music poetry. Over the last few years, the inconspicuous, shy girl has grown into a strong personality who has easily conquered the whole discussion. Great things are probably still waiting for us from the joint workshop. Exceptionally, the single “Sami”, for example, which Tichá performed with theatrical drama alongside the accordionist Michal Mihok, also proved this. She similarly wildly transferred us to the village dancer with the song “True Noon”. Ballads are also among the very strong moments of the debut, and live it was no different. It was the finer item like “Wind” that Kateřina cleverly interspersed with the more striking ones. It was before this song that she shared her travel experience, thanks to which she now does not give in so often. “We may be afraid later,” summed up. Let’s mark “Wolves” as the highlight of the evening, a song in front of which the audience asked to hide their mobile phones for a while. She enchanted and touched those present with this piece. Beauty. 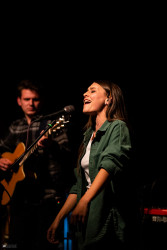 Bandjeez is already an integral part of David Stypka, who unfortunately could not baptize the album “Sami” and the poetry book “Ostrov, tastes like oranges”, as the artist wished. His song “Enchant” dedicated it to him and everything was as it should be. Ondřej Tuhák alias ODD, who produced the album, performed the christening role. An hour and a half ran like water. “I’m going to prolong the beginnings and ends of the songs because I’m so good on stage after such a long time,” announced Kateřina Marie Tichá from the beginning of the performance and the joy of playing on it was really visible all the time. It was a really magical and emotional evening – a powerful experience from which you will certainly draw energy for a few more days.

‹ What to do in Toulouse this weekend? › A. Armonaitė: “Lithuania seeks more active relations with South Korean business”