/ PHOTOGALLERY / A memorial plaque with a self-portrait of the important Czech illustrator of adventure books and comics Gustav Krum, who was born in Jihlava, was unveiled by members of his family in Prague at Hanspaulka. It was here, specifically in Rychtářská Street 4, that the academic painter lived and worked. He is best known for his pictorial accompaniment to Karel May’s novels, influencing the continuation of the work of his predecessor Zdeněk Burian. 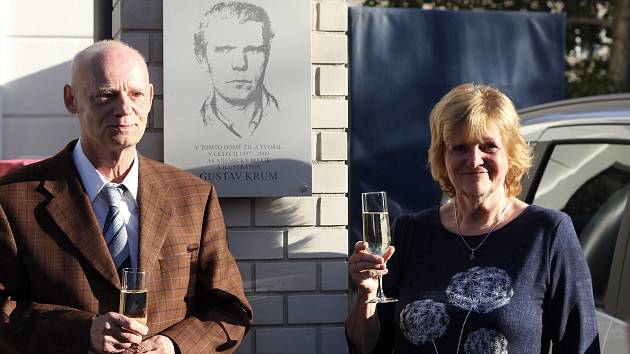 Descendants of Gustav Krum at the memorial plaques of an important illustrator.

The villa in Prague 6, which now houses a small exhibition of the author’s reproductions, underwent a major renovation several years ago. This year, the Lensi eye clinic started operating here. “I am glad that we received information about such an important inhabitant of this house. We can offer not only eye care, but also benefit from the beautiful creative energies that have remained present between their walls, “said the doctor and founder of the clinic, Tomáš Holohlavský.

Dragons flew over Letná for the freedom of education

The author’s son Petr Krum recalled his father’s turbulent life story, which he did not match with the content of novels and comics, which he accompanies with his original illustrations. “As a German from Jihlava, he was taken to the Wehrmacht during World War II and fought on the Eastern Front, where he defected and joined the Czechoslovak unit. He also fought in Dukla and before returning home he even ended up in a prison camp for two years, “described Petr Krum, among others.

In addition to the Maya, Krum illustrated almost a hundred other books. Not to be missed are the Crusaders of Henryk Sienkiewicz, novels by Jaroslav Foglar, Walter Scott or Jack London.

‹ What if the Pradettes agro-urban oasis project soon saw the light of day? › Researchers note bleaching vaccine effect when 7 completely inoculated people die in one month