Prague 1: Why were linden trees felled on Wenceslas Square?

The felling of trees often causes a great wave of resentment among Praguers. Just remember the “maple cause” when a century-old maple was to be felled in the Anen Triangle. He was to give way to the prepared project of revitalization and access to a nearby tentacle. Due to this, an extraordinary council also met, where the opposition wanted to have the mayor removed. Eventually, the city leadership stepped back and the maple stands on here.

Now it looks like another tree case. During Friday morning, information appeared on the Facebook page of Prague 1 that many questions concerning the felled linden tree on Wenceslas Square appeared at the office.The silver lime tree was felled by the Technical Administration of the City of Prague Communication under the responsibility of Deputy Mayor Adam Scheinherr (Prague Sobě) as part of the revitalization of the square, another one will be felled soon “, Prague 1 informed on the network and observes that it will check these steps and will remain informed about them.

It is true that as part of the revitalization of the lower part of Wenceslas Square, linden trees are to be felled and replaced by a more suitable species of deciduous tree. However, this step was abandoned under public pressure and the lime trees remained in place. However, the lime tree, which has now been felled, is not being liquidated as part of the revitalization, but because of its poor condition..

The trees were sick

“I do not understand my colleagues from Prague 1, who made the decision to cut them down themselves. The municipality only confirmed the decision of the city district. The application is two years old and now Prague 1 is making a case of maple, where a healthy tree was to be felled without the knowledge of the citizens due to the paving of the park. Two trees were felled here, which, based on opinions, posed a danger to citizens,“Adam Scheinherr, Deputy Minister for Transport, who is also on the TSK Board of Directors, responded

“One was completely dry, and when it was blowing, branches fell from it. The other had a large cavity in it. TSK only takes care of the tree line it manages so that nothing happens to anyone, “added Scheinherr, who added that the two lime trees mentioned, which had to be felled, will replace two new trees on in the same places.

Questions? And could we see them?

However, the inhabitants of Prague 1 themselves react to the situation rather embarrassingly, they see a political struggle for it. “Where exactly did the questions multiply? There’s nothing here on FB because of it. Isn’t it more like the site administrator (I guess the mayor?) Wants to point a finger in retaliation for a maple? Giving here information that you are dealing with it without any context is useless, “Eva Svoboová thinks

“Neighbors from around Wenceslas Square write us emails and make phone calls. Surely you will recognize that it is good to try in advance (or as soon as possible) to inform about it, “the city district replied immediately.

“Did the neighbors wake up now? No stopping signs due to felling are there for at least 2 weeks. Did the neighbors from Prague 1 not notice the rotten horse without leaves that is being felled there? Neighbors from Prague 1 are a bit of a comedy, I would say and the administrator of this site is very much outside,“Realization by Michal Šlechta. However, the answer from Prague 1 did not come. So let’s hope that the lime trees will be hit by healthy trees in the near future and that Prague 1 will be calm again.

The lime trees on Wenceslas Square were ill, so they had to be felled. 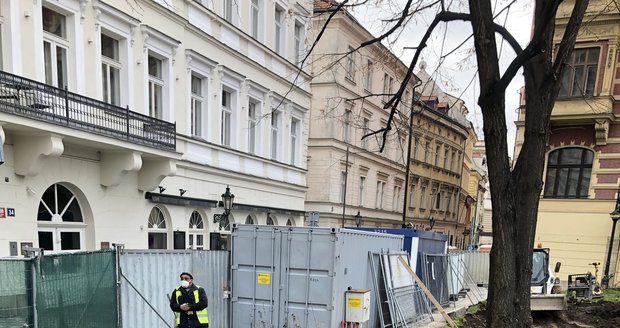 Activists today (March 18) again demonstrated against the felling of a 100-year-old maple.

‹ Andrey Kobelev: Russia is obliged to enter the World Cup › “The lady told us it was too late”