Sweden’s playground shooting provides a violent backdrop to the election

Swedes have become all too familiar with gun violence. But the shooting of a mother and her child at a playground in central Sweden last week has provided an even more shocking and violent backdrop to the country’s parliamentary elections on September 11.

“It is getting worse and worse when it comes to violent crime. It worries people,” says Torsten Elofsson, former Malmö police chief who is now running for the centre-right Christian Democrats.

– Before it was just Stockholm, Gothenburg and Malmö, he continued, referring to Sweden’s three big cities. “Now you see it in small towns all over Sweden. It is getting closer and closer to where most people live.”

Over the past decade, Sweden has gone from having one of the lowest number of shooting deaths per capita in Europe to the highest, according to data from the Crime Prevention Council. This year is on track for a record for fatal shootings with a total of 44 deaths as of mid-August, not far from the previous high of 47 in 2020.

Law and order, once dismissed as a gang-on-gang phenomenon confined to the immigrant-heavy poor suburbs, is among the top priorities of Swedish voters, according to opinion polling firms.

Nicholas Aylott, an associate professor at Södertörn University, said he recently read about a 17-year-old who was shot dead near Stockholm, only to find out the victim was a friend of his son who had previously visited his home.

“It’s unbelievable, but in a way inevitable. It stops being something you read about in the newspapers and is something you experience. You couldn’t have a clearer symbol of how Sweden has changed, he added.

Crime and shootings have dominated both the election debate and the party leaders’ travel plans.

A playground in Eskilstuna, a town of just over 100,000 residents, has taken center stage after the shooting there shocked the nation. Swedish police believe the mother and her five-year-old, both injured in the attack, were caught in the indiscriminate crossfire of a gang dispute.

The child’s father told Dagens Nyheter: “How can we live in a place where children risk being shot on a playground? There is no safety anymore.”

The ruling Social Democrats, in power for the past eight years, have toughened their rhetoric on law and order and immigration in an attempt to fend off harsh criticism from the right-wing opposition.

– This is an attack on the whole society, and therefore the whole society must defend itself, said Sweden’s centre-left Prime Minister Magdalena Andersson during a visit to Eskilstuna this week.

But it is the nationalist Sweden Democrats who appear to be benefiting from the focus on crime, who have long warned that the country’s open immigration policy until 2015 would lead to growing violence. The increase in shootings has been linked to turf wars between drug gangs founded by immigrants.

– We have had a social democratic government for eight years and they have promised to crack down on the gangs, but it has only gotten worse, said Jimmie Åkesson, the leader of the Sweden Democrats, when he also visited the playground this week. 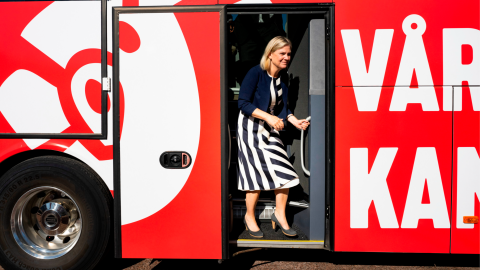 In the southern city of Malmö, many of the dynamics of modern Sweden are shown. The city center is full of trendy bars and restaurants that attract an international crowd, many of whom work for start-ups in the city or the nearby Danish capital, Copenhagen.

But it is also the entrance for many immigrants, and home to one of the country’s most infamous suburbs, Rosengård.

Elofsson said he saw the problem years ago as a police officer, looking at the names of those arrested and seeing immigrant names overrepresented.

“For many years we were silenced. It was not taken seriously by politicians or the media,” he said, adding that there were growing signs of parallel societies and even local versions of Sharia law.

The police in Rosengård have worked with the community and had some success in reducing shootings in recent years, before the increase in 2022.

Glen Sjögren, a veteran officer, said politicians’ current focus on tougher sentences and more police officers was too simple an answer, arguing that it was not a law enforcement problem but a community issue.

– Giving the police more resources is not a solution. The whole community needs to say this needs to stop and we need to do this differently from preschool up. If we’re going to have as much immigration as we’ve had in recent years, we have to get better at integrating,” he added.

One issue, he said, was that there was a feeling among many Swedes that “as long as it doesn’t happen here”, most people have never set foot in one of the immigrant-dominated suburbs.

At the Emporia mall, not far from the bridge connecting Malmö and Copenhagen, a woman told the Financial Times that she had “never been to Rosengård, and I hope I never will.” Two days later, a man was shot dead in the same mall.

Andersson has recently changed his tone and warned that Sweden should not have Chinatowns, Little Italys or “Somalitowns”. However, the unusually blunt language has upset many in her party who are used to being warmer towards immigrants.

“If we continue with this rhetoric, I don’t know that I can continue in the party,” said one activist in Stockholm, arguing for a need to focus on better welfare and schools for immigrants, and not just be tougher on crime.

But for Elofsson and many right-wing politicians, the situation is urgent. “If your house is on fire, you call the fire department, you don’t think about how it started. Only when the fire is out can you work on prevention.”