Slovakia at the Culinary Olympics. Will you make it to the finals? – Phenomenon – Journal

Its world finals take place every two years in Lyon, the work of the founder, the famous chef Paul Bocuse, and its atmosphere is really reminiscent of sports competitions at the Olympics. The winners will receive a trophy – a portrait of Paul Bocuse, which in turn resembles an Oscar statue.

No Slovak chef full of the stands and the atmosphere of the world finals has yet experienced such a competition, but now he has a chance. If he advanced from the European round, which will be in Budapest in March. But even if not… Just the fact that the national round of the Bocuse d’Or competition took place here this year, which is a prerequisite for getting to “Europe”, is a huge success. It happened after 11 long years.

Hungary scored, are we worse?

At that time, chef Jaroslav Žídek came up with the idea of ​​getting Slovakia on the map of the gastronomic world and involving it in the Bocuse d’Or competition. I remember how I thought it would be great and that I noticed Slovakia, our chefs and gastronomy outside. He believed that it would interest chefs, the media, important people who knew that if they supported tourism, it would bring money to the state coffers.

“But the truth was that no one cared, no one knew who Paul Bocuse was and what an amazing project he had started. For me personally, it was a disappointment and a complete sobriety. We also took part in the European round, where the commission selected us, but I lost my illusion and I put the project on the shelf, “he says. So for 11 years there was silence in Slovakia about the competition.

Metro has been a partner of the organizer of the world round of the competition for several years. Her Slovak representation decided to renew the competition with us. The fact that the current CEO of Metro Cash & Carry SR, Károly Szalai, who came to Slovakia two years ago, is certainly from Hungary also played a role in this. The country that is very successful in this competition has even won the European finals.

“Hungary has been participating in the Bocuse d’Or competition for several years and the state strongly supports this activity, as well as the development of gastronomy. That is why today tourists come to Hungary to Michelin villages, pay in 5-hour hotels, spend a lot of money, which has an impact on the overall economy of the country. When in Hungary, I don’t see why it shouldn’t work in Slovakia, “Szala.

The Slovak Association of Chefs and Confectioners took the organization of events under its wing, and weeks of feverish preparations began for its president Vojta Artz. The French organizers have postponed the date of the national competitions. After the new one, they had to organize by the end of November (11 years ago, it competed at the end of January). So to organize the national round, the union had since the decision to hold three months.

The instruction manual is not a rough book, everything must be kept to the smallest detail. In addition, the epidemiological situation in the last days before the competition and the threat of lockdown is deteriorating. “I haven’t slept much in those three months and I’ve lost a few pounds. Now I have really lost my boulder, “confirmed the successful finals of the Slovak final V. Artz.

A competition that is not for everyone

In 11 years, Slovak gastronomy has changed and even though the top one in our country has never been fixed on roses, Slovak chefs are also advancing. “It simply came to our notice then. Only in the fact that 11 years ago I went and looked for people who came to compete – and now they have applied themselves, “says Jaroslav Žídek. In the end, they chose four and one substitute for the finals.

The competition is not for everyone, for example, if a restaurant is built specifically on the chef and the chef wins it, the company can practically close for a few weeks… The winner advancing to the European round must complete, for example, several hours of training, it is a full-time job. Since we train with a mentor from abroad, I must know English well. This is also important for the presentation in “Europe” or in the world finals.

The participants, of course, had to train for lessons before the Slovak round. Prepare drawings of meals, time the procedures, because the whole cooking must be done within the time limit. Therefore, they had to have everything “experienced” when they stood at the worktops.

Every year, the organizer of the competition determines the ingredients from which it will be cooked. This year it was fish and veal. Metro, as a supplier, tried to secure them mainly from domestic producers. He succeeded by half.

“Sturgeons, from which fish food was prepared, were supplied to us by the Stupava Fishery. They met everything that the French organizers demand from suppliers and raw materials. However, we did not find a veal supplier that met all the strict criteria in Slovakia, so it cooked from imported veal, ”explains Volkan Buyruk, Sales Director of Metro Cash & Carry SR.

The difficult role of jurors

The contestants prepared the same amount from the fish 14 portions on a plate and from the veal, only first served it in front of the jury on a large bowl. Then they had to divide it into plates so that the food looked as good as a whole on the mission, but also as individual portions. They had five and a half hours to prepare, and a technical jury oversaw everything.

The rules were strict – nothing could be prepared in advance, not even as a semi-finished product, and care was taken to ensure that minimal waste remained when preparing meals. Then the meals were tasted by an expert jury consisting of Slovak and foreign chefs. They came here from Hungary, the Czech Republic and Norway. In addition to the expert jury, the food was also evaluated by a lay three-member jury. Everything was scored and the result had to be approved by a notary.

However, if you think that being a juror in a cooking competition is a dream job, it’s not quite like that. “I took the time and we had about two and a half minutes to taste each meal,” one of the members of the lay jury, Milan Junior Zimnýkoval, blocked the smile.

The Slovak round of Bocuse d’Or was finally won by the favorite – Peter Duranský, who competed 11 years ago and finished second. In the meantime, he became the first Slovak Michelin star holder, albeit as the chef of the Viennese restaurant Loft. 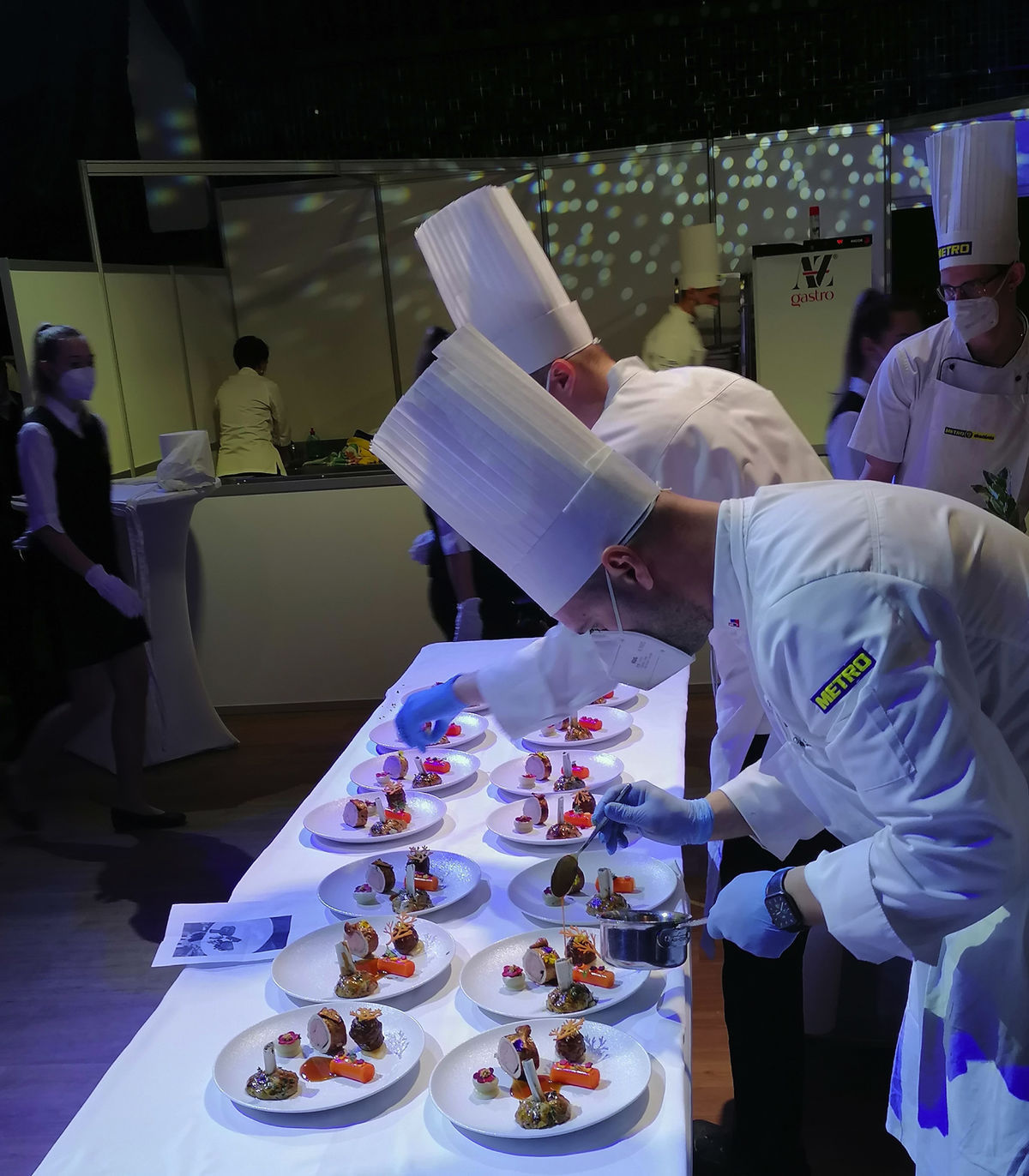 Chefs The team of the winner Petr Duranský at work.

However, the difference between him and another Jozef Hromják from the restaurant Villa Sandy City Park Resort in Košice was small. It was the chef of Košice who pleasantly surprised some of the jurors, especially his bowl. One of the jurors, Rado Nackin, the publisher of Bedekro Gurmán in Slovakia, described his veal creation as the food he liked the most.

“All competitors have shown combativeness, professionalism, team spirit. They demonstrated creativity and showed quality that is worthy of international rank. Every team deserves my recognition. This competition is not just about prestige, but it is mainly an opportunity to raise gastronomy in Slovakia – and in my opinion it has succeeded today, “said one of the professional jurors, chef Michal Konrád.

The Slovak finals have succeeded, the winners are waiting for the European ones – and the state should be on the line wherever the Bocuse d’Or is organized. Károly Szalai calculated the cost of the competition, including the European final, so everyone belongs (but certainly also a mentor from Norway) to 80-100,000 euros.

So far, all the details have been financed by the competition’s partner, Metro. However, Jaroslav Žídek believes that this time he will be able to obtain preparation and obtain funds from the state for participation in the European finals. It wasn’t like that 11 years ago, but let’s hope times have changed in this as well.

“Participation in the Bocuse d’Or competition will get you into the world media, you will notice you abroad, you will be interested in international gourmet bedekre. They stopped writing about Slovakia, but that could change. We have a chance to get the country to the world’s gastromap. It is not about the chef and his restaurant, because not every chef performs and presents himself, but the country. It’s about playing in Slovakia. In this case, only a private company is investing in it so far. that she will not be left alone, “expresses his conviction. I believe the presidential competition.

1. Peter Duranský, chef of the Das Loft restaurant in Vienna

3. František Plavý – member of the Slovak national culinary team, master of vocational education at the Hotel Academy in Žilina.

Each of the chefs also had an assistant, who must be less than 22 years old at the time of the Continental Round (which will be in March).

‹ Winter in Krakow. The first snow fell, a white morning in the city [ZDJĘCIA] › Terrible car accident in San Marino, an 18-year-old from Milan dies