Like a sea captain who traces a white whale, Steve Miller has been chasing “milk seas” for decades. He has been looking for examples of a rare form of the sea bioluminescence, and the arrival of new satellite instruments measuring night light has allowed him to detect several of these rare events. It has also given researchers a better chance to see future events.

Milky seas are a rare form of bioluminescence that sailors have described as looking like a snow field spread across the ocean. The steady white glow can extend long distances and is not disturbed by the awakening of ships. Sailors have occasionally encountered this phenomenon since at least the 17th century, and Jules Verne dropped a reference to it. Twenty thousand leagues under the sea.

“The great thing about the milky sea is that they are so hard to spot, usually on the high seas and away from major shipping routes,” Miller pointed out. “As a result, they have remained mostly part of the maritime tradition.”

Although only one direct sample of the phenomenon has been taken, the researchers believe that it occurs when populations of light-producing (light-producing) bacteria, such as e.g. Vibrio harveyi explode in connection with certain algal and phytoplankton colonies. Unlike typical bioluminescence – where phytoplankton emits light when stimulated and flashes for a moment like fireflies – bacteria in milky seas can stay in the light for days to weeks. However, very little is known about the circumstances in which they thrive.

In the early 2000s, while working at the U.S. Naval Research Laboratory, Miller and colleagues began discussing unique light signals they could detect Visible Infrared Imaging Radiometer Suite (VIIRS), which was developed for the next generation of NOAA and NASA satellites. In particular, they are considering whether VIIRS would be able to detect previously undetected phenomena in space, such as ocean bioluminescence.

Miller then happened to the ship’s captain’s report of a strange incident over the glowing seas off Somalia in 1995. That story about the SS Mucus led Miller to view night-time data from the Operational Linescan System of the U.S. Defense Meteorological Satellite Program. The signal was weak and the data was very noisy, but he noticed that what Mucus the captain reported from sea level was actually visible from space. Miller and colleagues published these findings in 2005 and then patiently waited for the 2011 release Finnish nuclear power plant the satellite that will be the first to carry the new VIIRS instrument.

VIIRS was developed with a “day-night band” (DNB) sensor designed to detect light at different wavelengths from green to near infrared. DNB is sensitive to light levels that are up to 10 million times dimmer than daylight, allowing scientists to distinguish signals such as aerial glow, northern lights, city lights, and reflected moonlight. When Miller joined the Cooperative Institute for the Atmosphere at the University of Colorado in 2007, Miller continued to build a team to calibrate and explore DNB’s new features. He believed it could help him find difficult milk seas. 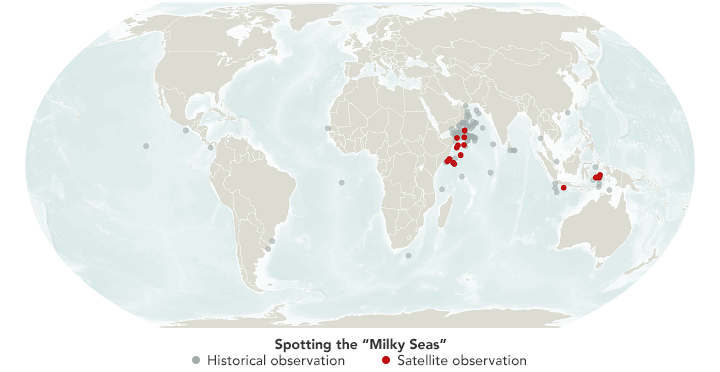 On one road, Miller built on the basis of a list of milk sea observations compiled by a marine biologist. Peter Herring. Miller collected more than 200 mentions of glowing seas found in historical documents and ship reports. He found one unlikely report from the CSS captain Alabama in 1864 off the coast of Somalia, which was strikingly similar to 1995 Mucus event. After mapping these reports from the last two centuries, Miller and colleagues found that most came from the Northwest Indian Ocean and the Arabian Sea, as well as waters near Indonesia and Maritime continent.

On the second track, Miller faced many challenges in deciding whether VIIRS could detect a weak, short-lived signal from the Milky Sea. The day-night lane is sensitive enough to detect a wide variety of forms of night light in the ocean and above – including boat lights and rig gas flares – and even in the sky – including air glow and atmospheric gravity waves. Clouds and snow also reflect light at night and mutilate DNB signals. Then there’s the Moon: half the month of the moonlight is the dominant signal reflected from the surface of the ocean, making it difficult to see much more.

All of these signals are usually brighter and ubiquitous than the milky seas, so all of them had to be ruled out before Miller could tell if the light came from the ocean itself. He also noted that DNB’s response to light emissions is somewhat “redshift“Out of the presumed blue / green light emissions of most forms of marine bioluminescence.

In new study published in July 2021, Miller and eight colleagues demonstrated that the VIIRS was indeed able to detect ghostly luminescence. Looking at VIIRS data from 2012–2021, they found 12 cases of milk in the ocean across the Indian Ocean and the western Pacific. The signals from each event were invisible during the day – and thus not due to any other reflective substance in the ocean – and remained with the surface currents drifting for several consecutive nights.

The largest event is displayed at the top of this page. The VIIRS instrument of the NOAA-NASA Finland nuclear power plant satellite received a picture of Java and the surrounding seas on August 4, 2019. At its largest, the Milky Sea event covers 100,000 square kilometers, or about the size of Iceland. It began in late July and was still visible in early September, covering two lunar cycles. The images below show the same event in addition to the chlorophyll measurements from NASA’s Aqua satellite. 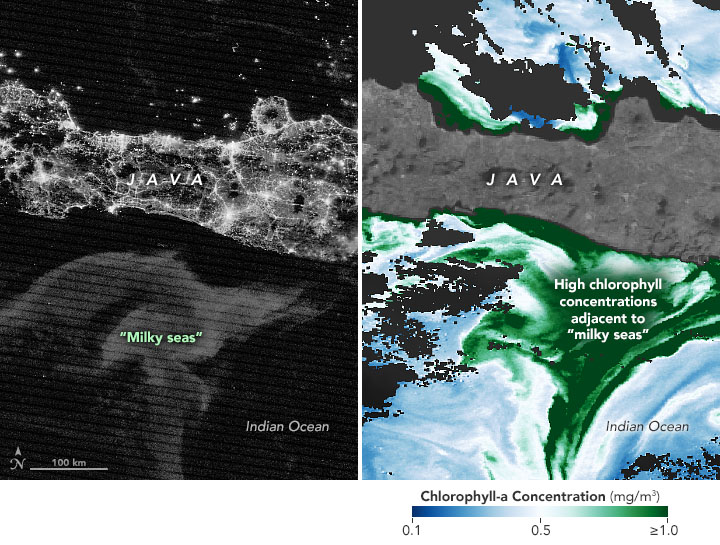 Note that the highest chlorophyll concentrations (green, light-harnessing pigment in phytoplankton) are adjacent to, but do not correspond to, the brightest areas of the milky sea. Miller and colleagues suggest that while algae utilize sunlight and nutrients for food preparation, photobacteria may consume dead or stressed algae at the margins of flowering. They may also use their light to attract fish because bacteria can also live in the gut of the fish. There may even be a symbiotic relationship between bacteria and algae that has not yet been discovered.

So far the only one on the spot study The milky seas incident took place in 1985 – a scientific research ship happened to encounter Socotra near the Arabian Sea. Miller would like to change that. Because the Finnish nuclear power plant and NOAA-20 satellites are both equipped with a VIIRS day-night band and make daily observations, it is possible that scientists will be able to detect an event in the milk sea from space and then send a research vessel to sample the waters.

“Reports over the years have been more or less consistent, but there is still a lot of uncertainty about what conditions make up such, as well as the exact composition, relevant ecology and structure,” Miller said. “And where do they fit into nature? What can they tell you about life in the ocean? Bacteria are a very simple form of life, and bioluminescence is believed to have been an essential function in some of the first forms of life. What could the seas of milk teach us about finding other, similar basic life forms in the universe?

“There is still a lot to learn,” he added. “We hope the day-evening band will help guide us toward this knowledge.”

‹ The Netherlands ignored embassy warnings about violence in Northern Mozambique › 41 Congressmen sent a letter to his minister, Blinken, asking Turkey not to sell F-16s