We call this activity a term that combines laughter exercises with laughter laughter exercises. Kristina, who started practicing laughter yoga in Lithuania six years ago, did not even suspect that it would be so necessary for such a small country as Lithuania.

Searching only for herself, Kristina Laučienė says that she discovered the meaning of yoga when she lay on the pavement after a long session and calmed down from laughter.

“I really wanted such fullness and looking for myself, who appeared in the camp where there was a laugh yoga coach. My first impression was similar to that of the participants coming to me now. I think skeptically how I will laugh here for no reason now.

But there was such relaxation, it seems that the whole space is coming down on you, that I am holding hands with the whole world, full of everything and thinking that you are not at the top of self-realization yet, but I don’t lack anything anymore, ”says about everything I have to do with laughing yoga Kristina. .

After feeling the benefits of this therapy, the woman came up with the idea to engage in this activity herself. After returning to Lithuania in 2015 after the laughter yoga instructor course, Kristina did not expect to receive the following recognition:

“People started inviting me to a class. It turns out that Lithuania needed a lot. During these seven years, I can boast that 21-22 can over the people, the participants, took part in the laughter yoga sessions I conducted, I really spent a lot of sessions. I didn’t expect it, but I got it so that the need matched my preparation, my capabilities, and I was able to respond to people. ”

These days, Kristina describes herself as a change mentor who advises both individuals and teams and their leaders on self-development issues.

“I help people or teams make a difference. I use powerful tools: the coaching method, his yoga, neuroeducation and other methods that lead to the same thing – I want to achieve a certain change, ”says K. Laučienė.

The first laughter that was discovered by the Indian physician Madan Kataria, realizing that the human body cannot distinguish between played and sincere laughter. K. Laučienė also mentions this, explaining that the main essence of laughter yoga therapies is simply to laugh without looking for a reason.

“Mostly adults, we get used to laughing for a reason. For example, we hear humor, watch comedy, just find those comic moments and laugh. Sometimes we even want to meet or look forward to the holidays because we know that a good mood will be guaranteed, that we will laugh, that communion, that good feeling will accompany us for a while after that. Laughter Yoga says: don’t wait for the holidays, don’t wait for tomorrow, the New Year, don’t wait for some opportunity, laugh now, “says Kristina, a laughter yoga instructor.

Laughter yoga involves a routine of breathing exercises that is performed in conjunction with the addition of certain stretching exercises, meditation. But the most important role is played by none other than breathing, then goes the human input itself and a little bit of sound. According to Kristina, laughter in yoga all starts with inspiration:

“Through the diaphragm, certain rhythmic contractions begin to initiate. It is then performed as if it were acting elements that you are someone, perhaps an opera soloist or trying to portray some animal, its gait and imagine, and how it laughed at it.

These are a few elements of improvisation, but the most important thing that makes a difference happen is when you understand what you are laughing at, when you discover that you can laugh and for no reason. It’s just an exercise that can be done at any time: in the morning, in the evening, I feel good, I feel bad, I can do it anytime. ”

The inexhaustible benefits of laughter

Kristina Laučienė says that in her practice there are also cases when laughter has cured no client from psychological diseases or even from cancer. According to her, the benefits of laughter are mostly endless:

“I tell the heart that laughter is like an oil to squeaky thoughts, to a dry mind, withered. It is like anointing, a healing, because laughter itself inspires a lot of vital energy, with which a person is awakened, he recovers as if from a certain stagnation, sleep. ”

In order for laughter to be good for health, it is recommended to laugh continuously for 10 to 15 minutes. After them, a person’s mood changes almost immediately, and when he feels psychologically relieved and better, he receives a signal and also gradually corrects as the mood itself.

“Laughter yoga is used in the world as a prophylaxis or even treatment for depression, it only shows how many good, positive processes take place in the human body at that time. There is a normalization of the circulatory system, sugar, stress and pain are relieved as well.

Imagine if we begin to feel physical pain by depicting it, then emotionally we also begin to feel that right. Laughter with these things is taken and settled during treatment, two, ”K. Laučienė names the advantages of laughter.

It will take not just one but a couple of sessions

According to Laughter, the yoga coach has uncomfortable, uncomfortable sensations on the faces of clients who have come to the class for the first time. “How I feel here, what you think or think about me, and if someone else filmed it and put it on Youtube, I’ll still make fun of it here,” says Kristina. 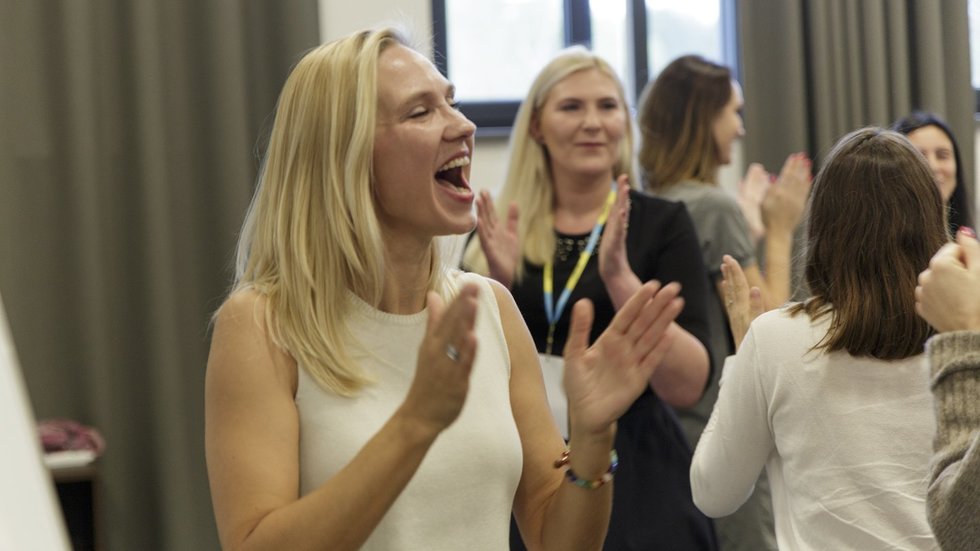 People are most irritated by the thought of what others will think of them. When visiting for the first time in laughter yoga, they often try to find a comfortable way out of unpleasant situations. But breaks happen when they realize that there is no need to think about anything more: neither what people will think nor what I will have to laugh about here.

“You just have to work with your breathing, with the diaphragm, focus on yourself, maintain eye contact in the group. People usually relax when they feel what that natural laughter is coming from deep down just out of their stomachs. How he relaxes, how a person can be relaxed himself, I myself could believe until I tried this practice myself. No other practice has given me such deep relaxation since after this laughter yoga session, ”says Kristina.

The woman also says that she notices that a small one needs at least three or four sessions for a man to understand the activity, how to exercise him, how he gets emotional and physiological sensations and most importantly – meets his needs and benefits.

“When a person starts to benefit, when he says he slept peacefully after the session, didn’t feel the pain for two days, sorted out the activity, noticed an improved mood when he starts to feel and see the obvious benefits that other and others around him see, he understands: and, good, it is already working, ”K. Laučienė shares her insights.

According to a seven-year-old laughing yoga coach, about the first three or four encounters are intelligence, during which a person understands the consequences for him:

“For the first time there is always a flash, everything is very funny, there is a moment of surprise. When the second time comes, the person already knows everything, then he needs to work with himself, as rightly in the student’s position, and for the third or fourth time that contact is discovered not only with himself but also with other people in the group. Then you get to form a kind of class, which is faina to make fun of together. And we are not looking for that reason, we are not laughing at each other, we are just discovering that laughter and that power of laughter in connection with ourselves. ”

Often this well-described and heard Kristina’s activity is also chosen by companies that provide internal emotional connection to employees.

“Laughter yoga is a great practice that checks a person’s limitations, their limits, their willingness to cooperate. With corporate teams, we also apply laughter yoga, including self-reflection at the time, a reflection on what I discovered about my relationship with a colleague, which I saw in one light and now see in another.

Many bands sometimes write to me after a year, and after two, and sometimes even after three or five. And now I suddenly got a call here, when a big Lithuanian company calls and says that I still remember me. They invite me every year or more and assure me that the team remembers with the best thoughts, the best intentions and wants again, because they feel that it helps them to come together, to be benevolent to each other, to laugh at yoga to work together and to forge those closer ties. welcomes the results achieved by the companies by participating in their team building sessions with laughter yoga sessions Kristina. 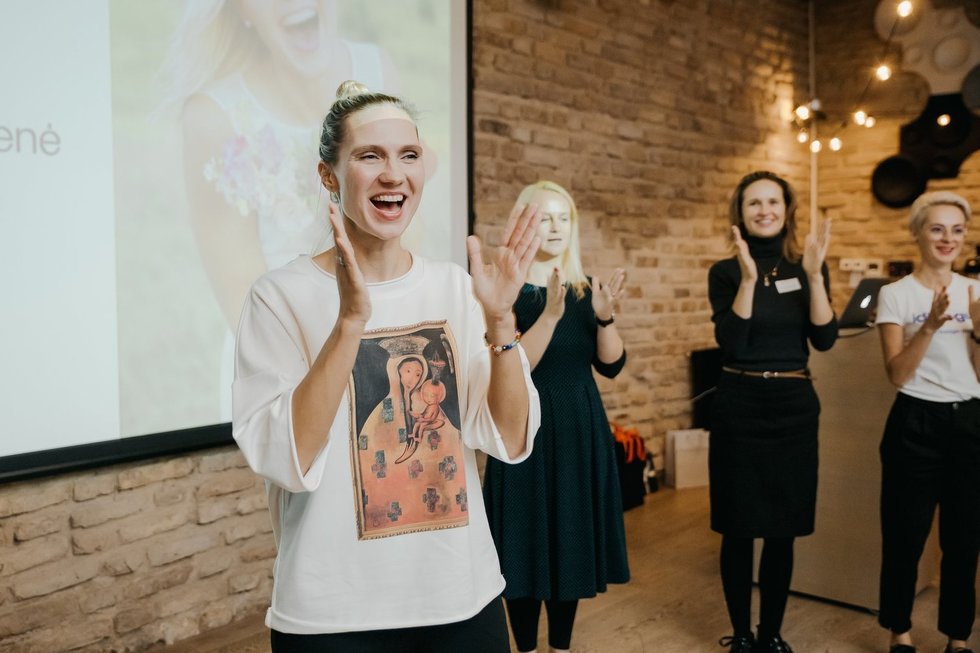 There are also cases when a person who comes to a session warns in advance that he will not be able to achieve one or another exercise, because, for example, he has back pain. In such cases, Kristina recommends simply being benevolent or doing as much as the person is capable of at the time. Of course, the results then speak for themselves.

“There are exercises where we inhale, sigh, bow and the person, for example, says he won’t really bow because his back hurts a lot. Well, even after the whole session, later he rejoices in his accomplishments and may even bow to the ground, which he said will not do. This means that painkillers are also excreted during laughter, well, and that communion between people is very much evident.

I’ve become very convinced over the years that well, those who lack communion because we closed a little, that’s when I started running online, people started saying that it represented the community we’re very much alive with. This laughter is the connection that connects us emotionally and we know that we are not alone, ”says Kristina Laučienė, a personal change consultant and professional coaching specialist.

“Laughter Yoga” coach Kristina Laučienė agreed with the readers of the news portal tv3.lt to share excellent laughter yoga exercises, which can be easily tried and feel the power of laughter at home. You can see them in a more detailed interview entry at the beginning of the article.

Not only Lithuania wields a sword against giants: a look at the present and the past, what ended it for other countries

Match with Lithuania will be remembered forever: Czechs escorted a basketball player out of the national team in an epic ceremony / News