China and Belarus: Moving Towards Commercialization

Oleg SHEPELYUK, “Belarusians and the Market”

Against the background of problems in the international economic arena, age-related political and isolated role of Minsk, the role of China for the Belarusian authorities is growing. What can be expected from cooperation with the Celestial Empire, which (in the performance of the Belarusian side) has been called “strategic partnership” for several years?

The extent to which China has become an important partner of Belarus in the political and military-political spheres can be estimated by the number of Alexander Lukashenko’s trips to Beijing. There were twelve of them – to no other country (with the exception of Russia, of course).

In the 90s, the use of cooperation was the sale of military equipment and weapons left over from the USSR to China. Military expert Alexander ALESIN told the newspaper “Belarusy i Rynok” that the most significant technology that Belarus “presented” to China with a view to future close cooperation was the production of special wheeled tractors: “A plant was built in China, a joint venture“ Shinjiang-Volot ”was created “. These Chinese not only successfully passed the experience, but also created on this basis a wide range of tractors and chassis, which are now equipped with intercontinental ballistic missiles, anti-ship missiles, anti-aircraft missiles, and multiple launch rocket systems, that is, the entire gamut of their weapons. The Chinese are grateful for this, since they have greatly reduced their strategic power, have become more resistant to a possible US attack. “

Further – satellite technologies, allowing to create digital electronic maps of the area for the guidance of high-precision weapons. In addition, there were other, less important projects. A new level of cooperation is China’s assistance, including technology for a “sparing” amount, which made it possible to create the Polonez multiple launch rocket system. By providing their test sites, they helped create the rocket industry in Belarus. And at the exit we have a missile with a range of up to 500 km with a 50 kg warhead – a serious weapon for our region, called “European strategic”.

In the 2000s, political contacts became a logical continuation (against the background of US sanctions), the equipment of loans was reinforced, but almost always “tied” – for Chinese supplies and materials.

Two factors contributed to the flourishing of relations: China’s Belt and Road Initiative, launched in 2013, and the Russian-Ukrainian conflict that began in 2014. Against this background, as well as against the background of warming in relations with Western countries, China launched a project to build an industrial park “Great Stone” in Belarus.

In 2015, Chinese President Xi Jinping flew to Minsk, which clearly indicated the interesting position of China in our country, which has an important geographical position on the way to the European Union and has become a well-known point on the “New Silk Road”. In addition, the Belji plant was launched to assemble Chinese cars, and the Chinese built a Vitebsk hydroelectric power station and several enterprises in Belarus. True, it was not without scandals (for example, in Svetlogorsk during the construction of a bleached pulp plant), but the trade turnover between the countries has grown significantly (see Infographics).

At the same time, Belarusian exports to China are small. Largely due to logistical problems: thousands of kilometers between countries make the supply of many Belarusian goods unprofitable. Despite this, dairy products are growing in China. And yet, the volume of exports to the Celestial Empire is very modest in comparison with supplies to the Russian market: it is dozens of times less. 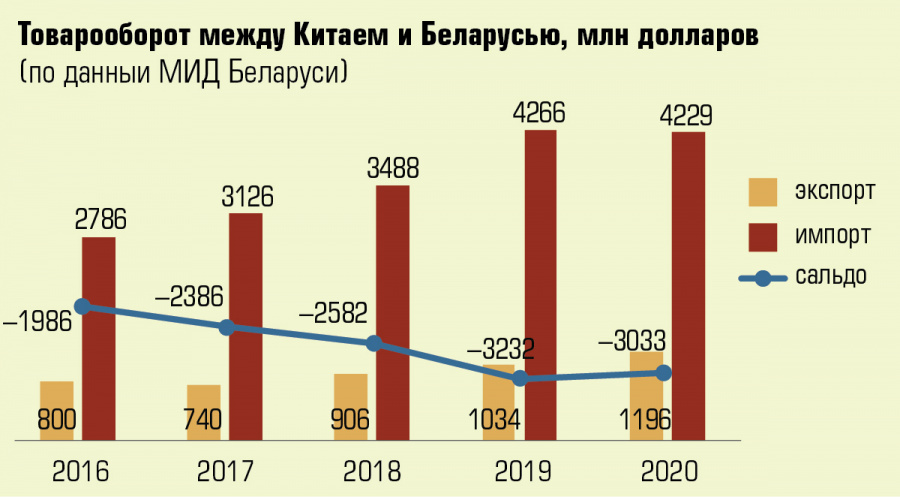 The Belarusian authorities constantly register that it was Jinping, not Putin, who first congratulated Lukashenka in August 2020.

How can you characterize relations between Belarus and China today? With this question, the newspaper “Belarusy i Rynok” turned to the Sinologist Olga KULAI.

“It is important to separate the political and economic implications. In 2016, a Declaration was signed on the establishment of trust management of a comprehensive strategic partnership and mutually beneficial cooperation. The Belarusian side believes that this is “the highest level of relations in history”. The Chinese side’s assessment is different. At the same time, in my opinion, today it is the most beneficial beneficiary – Belarus, which fits into the initiatives and projects of China, including “One Belt – One Road”, – she answered.

Since August 2020, the Chinese Foreign Ministry has supported the Belarusian principles of power and non-interference in internal affairs. According to Olga Kulai, it should be emphasized that China, which is constantly under US pressure, broadcasts this principle always, regardless of the situation, and not in relation to Belarus.

China’s economic support has always been viewed through a political lens. But, according to the expert, the principles adopted in international practice are working more and more clearly for Chinese companies, including state ones: rational behavior, a real assessment of investment risks, including international ratings.

“According to information from Chinese sources, the general opinion of the expert community, it is clear that Beijing has said and continues to say to Minsk about the same, and gives the same advice as the World Bank. Their recommendations are similar: the same words about transparent legislation, respect for private property, and so on. Therefore, there is nothing contradictory in the fact that the expression of a political position is not accompanied by the issuance of a loan, ”the expert explained.

Loan for the machine. Long-standing

According to Olga Kulai, it is necessary to understand that the support of the Belarusian authorities on the political track does not apply to sovereign loans to the official Minsk: the last one issued to the National Bank dates back to December 2019. But the amount is half a million dollars.

“You yourself can estimate the scale: this is the price of one machine. “Economic” lending to Beijing will decrease for several years, so it would be Politivno to hope that an exception will be made for Belarus. The Chinese side makes it clear to partners all over the world: if you want to receive financing from our state-owned banks, go on a commercial track, or at least move in this direction, ”the expert noted.

But should the Belarusian authorities take out such loans, more commercial ones? “This is a very good question. The approach of the Chinese side has changed: the selection has become tougher, and the conditions for issuing money have become more stringent. It’s hard to say what will happen next. It is necessary to put the question differently: “did the Belarusian authorities help to offer the Chinese something that would interest them,” and under what conditions will the money be ready? “, – Olga Kulai explained.

Maybe they will buy Belaruskali?

The “Collective West” allocated a lot of money (hundreds of millions of dollars a year) to the Belarusian authorities for infrastructure projects. And often not loans, but additional help. Now, when the project for the construction of bridges has stalled, they began to fall, when the project for the reconstruction and construction of water pipelines and treatment facilities was blown away – accidents and low-quality water supply to the houses of Belarusians started. Can China replace this money?

“If we analyze the behavior of China in other countries close to us, there is no such case. Close to this option is “technical and economic assistance to conditions”, but the customer must fulfill the money, they do not enter the Belarusian system, but circulate within the project, wholly and completely controlled by the Chinese side, “the expert said.

Another option for cooperation is investment. They were supposed to come through a Chinese park near Smolevichi. It was on him that the stake was placed, and it is constantly increasing. For example, with the latest decree, large investors received new preferences.

“In the“ Great Stone ”joint ventures are expanding, new ones are being opened, but the speed and scale to wish for more. And now the Chinese side (judging by the open information) is the managerial driver of infrastructure development, what will be the benefits for the environment, the mode of their functioning, which industries will develop in the park. Because people came to the Great Stone (from the same China Merchant Group) who have extensive management experience at the international level – in Europe, China, ”the expert clarified.

Can the Chinese buy any enterprises in Belarus? They are probably interested in Belaruskali. “We have proposed several, sometimes these negotiations were even concretized – as, for example, with Gomselmash. But the requirements put forward to a potential investor – to preserve jobs and management structure, debts – were definitely not satisfied with it.

They are interested in Belaruskali, they could buy it. The question is, will the Belarusian authorities want to sell it? And on what terms? If on “gomselmash”, then the result will be the same.

It is also important to note that China will assess the risks associated with sanctions and the impossibility of making settlements through Belarusian state banks, and integration into the global financial system is important for them. Therefore, the decision to acquire any assets will be very balanced, ”says Olga Kulai.

It’s no secret that the Belarusian authorities have big financial problems. To take another loan in Russia still fails, as well as link bonds. The financial market of Western countries is completely closed. Could China Borrow Multiple Billion Dollars?

“Maybe, but it’s unlikely to do it. I will assume that the Belarusian side raised the issue of state loans, and more than once. But until now, since December 2019, they have not received a state loan from China. And if the issue could be resolved, it would be resolved, ”said the expert.

What can we expect from the Belarusian-Chinese cooperation in the coming year? According to the interlocutor, China will continue to support the Belarusian authorities in the international arena – close cooperation in international organizations will continue. The anti-sanction rhetoric will also remain unchanged: the sanctions will surely bring Beijing and Minsk closer together than ever.

“As far as the economic side is concerned, here too, China’s behavior will be traditional: in the event of crises, it is wait-and-see. And one should not expect big investments in the Belarusian economy. The trade turnover will certainly grow, but the growth will be modest and will not replace the losses incurred in the vector, ”Olga Kulai summed up.

He has already confessed his intention in the Madrid dressing room