A violent storm hit Pisa and its province around 10 am this morning. The thunder first in the distance and then closer and closer marked the beginning of the disturbance, announced with the yellow code weather alert issued yesterday by the Operations Room of the Regional Civil Protection.
The pouring rain was accompanied by a strong wind that uprooted plants and trees in some areas of the province.

Tuscany scourged by bad weather: calls for calls to the fire brigade


“With the operations room that is following the strong perturbation that is crossing Tuscany with gusts of wind above 100km / h – the governor of the Region Eugenio Giani announced – the regional civil protection system is active and interventions are already underway in various provinces for tree falls and safety measures “.

Several reports also a Pisa city, with fallen plants and debris transported to the street (in the photo by Franco Tesi the situation in via Battelli). The coast was also swept by bad weather. A section of the state road 1 ‘Aurelia’ closed, in both directions, at km 323.
Criticality also in Ospedaletto with fallen trees and a shed near the collapsed Leonardo company (photo Gabriele Puma).

“Since this morning we have all been on the ground with the ‘machine’ of the Civil Protection to respond to the many reports that we receive. Several fallen trees and damage “writes councilor Raffaele Latrofa on Facebook.
Plants blown down by the wind are also reported in Piazza San Silvestro and at the Piagge.

Via San Francesco is temporarily closed to vehicular traffic, pending the safety intervention of an unsafe tree which is placed on the public lighting power line.

“The operations room of the municipal Civil Protection – in connection with the Fire Brigade – has been at work this morning to coordinate requests for intervention, about fifteen entities – writes Mayor Michele Conti on Facebook – roadside assistance interventions are scheduled and, during the day, the teams at work will intervene throughout the territory “.

Due to the fall of trees and branches on the carriageway, a section of the state road 439 ‘Sarzanese Valdera’ was temporarily closed to traffic, in both directions, at the height of km 88 a Lajatico. The Anas teams and the police are present on site to manage the road network and to restore traffic as soon as possible.

Also affected leather district with fallen trees and damaged roofs.
In Santa Croce sull’Arno a warehouse in the area of ​​via Chico Mendes was damaged. 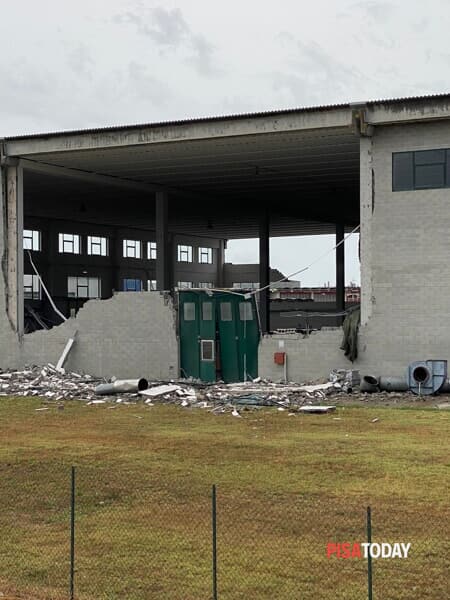 “We receive reports of trees and branches fallen on roads and of dangerous situations in the municipal area, following a whirlwind. We are activating emergency teams – writes the mayor of Facebook on Facebook. San Miniato Simone Giglioli – I ask you to pay attention and report any situations to the dedicated municipal numbers (0571-4061 switchboard, 0571-406406 Municipal Police) or to the emergency numbers “.

Discomforts also a Volterra where the strong wind damaged the roof of the Liceo Carducci and uprooted the umbrellas of the bar in Piazza dei Priori.

Trees also fallen on the freeway: in the video below the situation in the Cascina area.

Disruptions also to telephone and electricity lines reported in various areas of the province.

Hockey, the Cus Pisa guest of an important international tournament

Wine Master of the Sant’Anna High School of Pisa: registration

presentation of the book “the great journey” Events in Pisa