Bargiggia: “Naples: 6 players in the sights, all names. Navas reaches 60%”

Paolo Bargiggia, transfer market expert, took stock of Napoli’s strategies in the summer session of the transfer and transfer campaign.

The transfer market journalist, Paolo Bargiggiareleased some statements during the transmission Il Processo, broadcast on the 7 Gold broadcaster, the point on the negotiations made by the company headed by Aurelio De Laurentiis: “Napoli are looking for a goalkeeper, a midfielder and a striker. They have six players in their sights. They are: Navas, Kepa, Mignolet, Nandez, Ndombele, Raspadori“. Simeone, on the other hand, will soon join Luciano Spalletti’s team.

Paolo Bargiggia then revealed the percentages: “As for the goalkeeper, Navas has a 60% chance of joining Napoli, Kepa 30%, Mignolet 10%. Meret risks staying and becoming the third goalkeeper (also behind Sirigu, ed). In midfield, however, the ballot is between Nandez and Ndombele. The Cagliari player has a 60% chance of going to Campania, the Tottenham player, which some already give to Napoli, 40%. Finally, for Raspadori, Napoli continues to negotiate with Sassuolo to reach an agreement “. 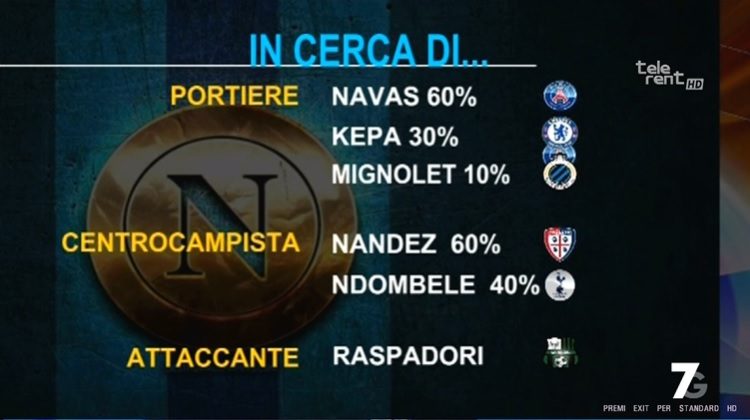 Mertens is already homesick for Naples. Why do you send that email to De Laurentiis in June?

“Did I say Napoli from 5th or 6th place? Yes, then two players arrived.” Faithful rectification

‹ Mauricio Moreira won the Volta a Portugal › 📰 Editorial: Toulouse at the dawn of a new day