Today, I thanked President Biden for his historic appointment as Judge Ketanji Brown of Jackson to the U.S. Supreme Court, the first black woman and the first federal public defender to serve in the country’s Supreme Court. Throughout the week, as co-chair of the Helsinki Commission, better known as the Helsinki Commission, I led a two-party delegation to a meeting of the Parliamentary Assembly of the Organization for Security and Cooperation in Europe in Vienna, Austria. The delegation issued a strong joint statement on Thursday expressing its outrage at Russia’s invasion of Ukraine and promising our strong support for Ukraine’s sovereignty and independence. I also proposed a law on keeping eviction information out of credit reports; continued to monitor the progress of the recovery from the ice storm on 3 February with local, state and federal emergency authorities; called on leaders to include the language of environmental law I drafted in the Water Resources Development Act; presented a bill on granting permanent residence permits to Russians instead of whistleblowers; announced two National Cancer Institute grants to St. Jude Children’s Research Hospital; and provided a health tip. Keep reading and follow me Twitter, Facebook and Instagram to see what I do when it happens.

Chairing the Helsinki Commission at the OSCE Parliamentary Assembly in Vienna

We are announcing two major research grants to St. Jude

Quote of the week

Earlier today, I thanked President Joe Biden for the appointment of Judge Ketanji Brown Jackson to the U.S. Supreme Court. Judge Jackson, who currently works for the U.S. Court of Appeals in the District of Columbia Circuit, would be the first black woman and the first federal public defender to serve in the Supreme Court of our country. See my newsletter for candidacy here. 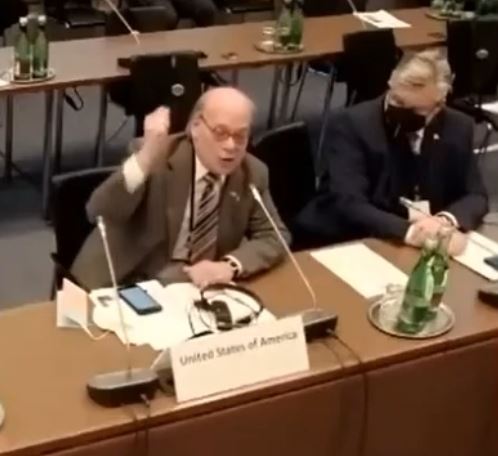 Shortly after Russia launched its attack on Ukraine late Wednesday night, I led a joint statement by the leaders of the Helsinki Commission expressing outrage at the unprovoked and unjustified violation of Ukraine’s sovereignty and independence and international law. The statement says in part: “We are outraged that Russia’s Vladimir Putin has decided to dramatically escalate the war against Ukraine. These are not the actions of a powerful leader, but a despot who seeks to deny Ukrainians the peace and freedom he has denied to his own people. “See full statement here.

Chairing the Helsinki Commission at the OSCE Parliamentary Assembly in Vienna

Throughout the week, I have led a two-party congress delegation on a fact-finding and support trip to the Lithuanian Commission in Vilnius, Lithuania, and Vienna, Austria. In Vilnius, we discussed tensions over Ukraine with the Lithuanian authorities, including President Gitanas Nauseda and Prime Minister Ingrida Simonyte, who described Putin’s rhetoric as “Orwellian.” In Vilnius, we also met with leading Belarusian opponents of President Alexander Lukashenko, who has become a prayer for Putin, who stole the 2020 election against opposition leader Sviatlana Tsikhanouskaya, whose husband Sergei is serving an 18-year prison sentence. political activity. I also visited U.S. troops near Belarus, where Russian troops are stationed, and had lunch with a Union City soldier and met another soldier from Lexington. In Vienna, I attended a plenary session of the Parliamentary Assembly of the Organization for Security and Cooperation in Europe and spoke about the use of 20th-century Russian propaganda. In these remarks, I called for “It is time to give peace a chance.” Look at that speech here.

Earlier today, I introduced the Keep Evictions Off Credit Reports Act, which prevents evictions related to the COVID-19 pandemic from appearing on credit reports. With this bill, tenants evicted during the COVID-19 pandemic should not oppose them when applying for future housing. See my bulletin on the bill here.

I also sent a letter today to a number of colleagues with the leadership of the Committee on Transport and Infrastructure and its Subcommittee on Water and the Environment, urging them to include the language of environmental law I proposed in the forthcoming Water Resources Development Act (WRDA). See that letter here. I have worked to strengthen the U.S. Army Corps of Engineers ’commitment to environmental law principles in evaluating pipelines and other projects. I was proud to join the grassroots efforts to demand environmental justice when the Byhalia Connection pipeline was proposed for a route through the historic district of Boxtown. I talked about it at a recent consultation of the Committee on Natural Resources.

On Tuesday, I presented a private bill to facilitate the issuance of a permanent residence permit in the United States by Vitali Stepanov and Julia Stepanova. Both Vitaly and Julia, and their little sons, had to flee their home country of Russia in 2014 after exposing Russia’s widespread, state-sponsored doping program ahead of the 2016 Summer Olympics. See my bulletin on the bill here.

We are announcing two major research grants to St. Jude

On Wednesday and Thursday, I announced two $ 1,150,451 grants to St. Jude Children’s Research Hospital from the National Cancer Institute. See my publication for grants here and here.

Although camouflage restrictions are being lifted in many areas, it still makes sense to use masks indoors in public places, even though COVID-19 infection rates are still high. Many retail pharmacies and other companies offer free masks available. I urge you to keep masks close to others.

Free COVID-19 test kits will arrive in mailboxes following the White House initiative to get the tests delivered to every household in the country. Use them if you plan to be in an area where your condition could endanger the health of others.

Quote of the week

“The prayers of the whole world are with the people of Ukraine tonight as they suffer from the unprovoked and unjustified attack by the Russian army. President Putin has chosen a premeditated war that will bring catastrophic loss of life and human suffering. Russia alone is responsible for the death and death caused by this attack. The United States and its allies and partners are responding with unity and determination. The world holds Russia accountable. ” – Statement by President Joe Biden on Wednesday evening following the start of the attack on Ukraine.

As always, I will stay.
sincerely,