STAFebruary 24, 2022 – Slovenia strongly condemns the Russian attack on Ukraine, Prime Minister Janez Jansa said that it was a military aggression against the country without precedent, and President Borut Pahor for a serious violation of international law and the principles of peaceful UN resolution. disputes.

“Together with our allies @NATO and #EU, we strongly condemn Russia’s unprecedented military aggression against Ukraine. Russia must immediately withdraw its army and fully respect Ukraine’s territorial integrity,” Jansa wrote on Twitter on Thursday.

“Introduce a no-fly zone over Ukraine. Respect the obligations of the 1994 Budapest Memorandum,” he wrote in another tweet, adding the hashtag #StandWithUkraine in response to the Slovenian prime minister’s response to Russia’s massive invasion of Ukraine today.

Jansa later warned that “many nations will now try to develop their nuclear arsenal” in light of events in Ukraine that violate the Budapest Memorandum. “The world has just entered a hot hybrid war with unprecedented consequences.”

In the afternoon, the Slovenian Prime Minister spoke by phone with his Ukrainian counterpart Denys Shmyhal. 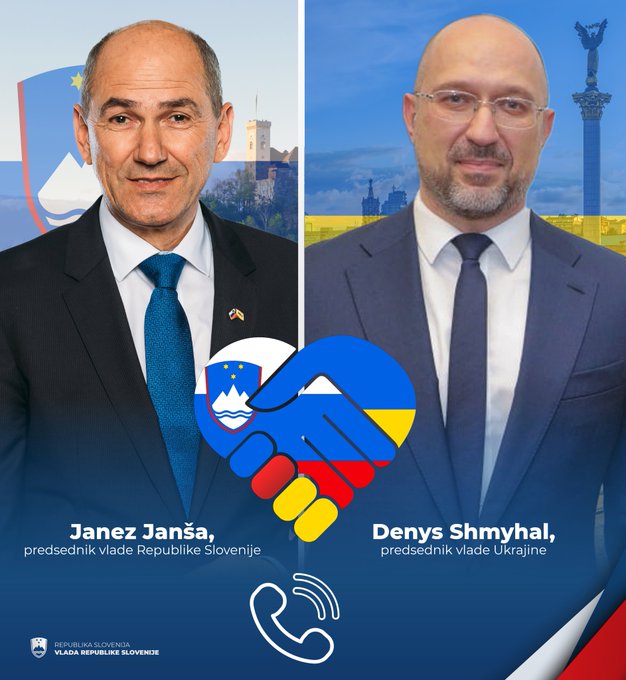 Jansa tweeted that they discussed “the situation after the Russian aggression, which aims to behead the Ukrainian state and establish a puppet government.”

As a sign of solidarity with Ukraine, the country’s flag was hung on the building where the government and presidential palaces are located.

Ukrainian flags are displayed on government buildings in Slovenia as a sign of solidarity 🇺🇦. #StandWithUkriane 🇺🇦 🇸🇮 https://t.co/kM4LovgZaf 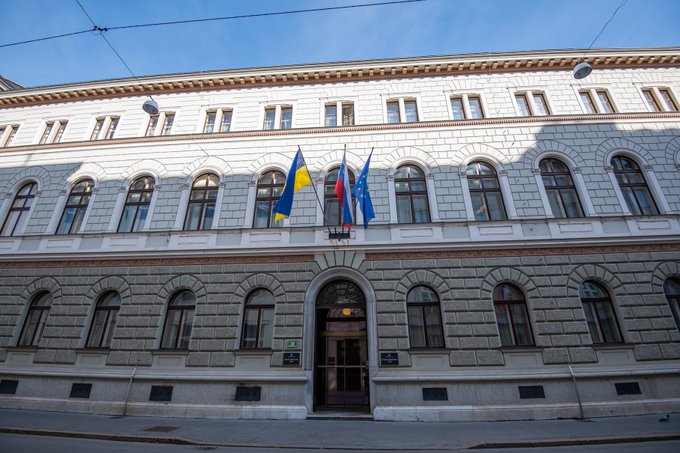 Janša is expected to attend today’s extraordinary EU summit on the Ukrainian crisis in Brussels. His flight to Ukraine, which was announced yesterday before the situation worsened, has been canceled, the Slovenian Army said.

President Pahor also took to Twitter with “the strongest condemnation of Russia’s aggression against Ukraine.”

He added that it was a “serious violation of international law and UN principles on the peaceful settlement of disputes”, and Slovenia expressed solidarity with the citizens of Ukraine.

In a statement for TV Slovenia, Pahor said that by recognizing two self-proclaimed independent regions in Ukraine, and especially by attacking Ukraine militarily, Russia had violated international order and undermined European and international security.

He called on Russian President Vladimir Putin and Russia to immediately cease hostilities, end the use of military force and give diplomacy an opportunity.

“Putin can only establish mutual trust if he immediately stops military operations and gives the possibility of dialogue,” Pahor said.

The President expressed concern that this hostility and aggression could spill over from Ukraine to Moldova and Georgia all the way to the Western Balkans.

The attack was also strongly condemned by Parliament Speaker Igor Zorčič, who wrote on Twitter that it was an illegal, unjustified and worthy act. He added that the EU must remain united and do everything possible to achieve a truce.

The government, meanwhile, held a closed-door session to discuss the situation during the “Russian aggression against Ukraine”, Jansa later announced on Twitter. It has also taken decisions to approve existing NATO measures and to activate the necessary standby services. Janša added that the resolutions would be presented to the parliamentary committees for defense and foreign policy as soon as possible.

Before Russian President Vladimir Putin announced a military operation in Ukraine, Slovenia strongly condemned Putin’s decision to recognize the Ukrainian provinces of Donetsk and Luhansk, which are under non-governmental control, and to send troops to both regions. . .

Slovenian diplomat Miha Erman presented the Slovenian opinion on behalf of the Slovenian Ambassador to the UN Boštjan Malovrh, who chaired the General Assembly. Erman said that Slovenia supported the EU statement on the matter and welcomed the discussion.

Erman also pointed out the difficult humanitarian situation and said that Slovenia was calling for unrestricted access to humanitarian aid to Ukraine. He is also very concerned about the numerous mine casualties on both sides and the violations and abuses of human rights in Crimea, especially against Tatars, Ukrainians and minorities.

‹ how cookies broke the brain of a Japanese woman. reedus › Strengthening early childhood education and care in Luxembourg: spotlight on non-formal education