and now out the determination to beat Gevi Napoli

BRINDISI – The sixth defeat of the last seven games marked by the 21-point difference (88-67) of Brescia has to be redeemed, and the qualification and the best placement in the “Freccia Rossa” Eight Finals of the Italian Cup is at stake . It is therefore essential against Napoli to ask the team of coach Vitucci the maximum commitment, the greatest determination and the necessary courage, to get out the grit, characteristics that have disappeared in the Brindisi team in the last few games, in order not to miss a commitment to which the company and the fans are particularly keen to have been authoritative protagonists of the last editions. Against Gevi Napoli, due to the importance of the stake at stake, the complacency with which Happy Casa has sold to Leonessa Brescia, even with all the justifications of the case, must be denied (but also the team of coach Magro had been coming for a week nightmare!), a game in which he still confirmed strong and serious doubts about the consistency of an inadequately constructed roster, with the hiring of Americans who appeared decidedly unable to guarantee the achievement of the objectives considered by the company and the fans (Wes Clark, Josh Perkins and Myles Carter have long been in the odor of “cutting”).

The difficulties of directing and the involution of Gaspardo

Alessandro Zanelli’s injury deprived coach Vitucci of a valid alternative to Josh Perkins and Wes Clark, in which mainly the team appeared lacking, a clear difficulty due to the lack of talent of these players both in the challenge phase of the game and in the realization phase. and for the sheer lack of leadership. Gaps that coach Vitucci tried to make up for against Gevi Napoli, also relying on the “help” he could provide in the control room from Lucio Redivo and Riccardo Visconti, players able to carry the ball faster even than the “endless setter” who is Josh Perkins and the confusing and often hasty Wes Clark. And then there is Manuel Gaspardo (photo below), whose recovery is essential for the team’s recovery, especially in this play-off match against Napoli, who returns to the best physical condition and form in order to have a decisive influence on the result. . 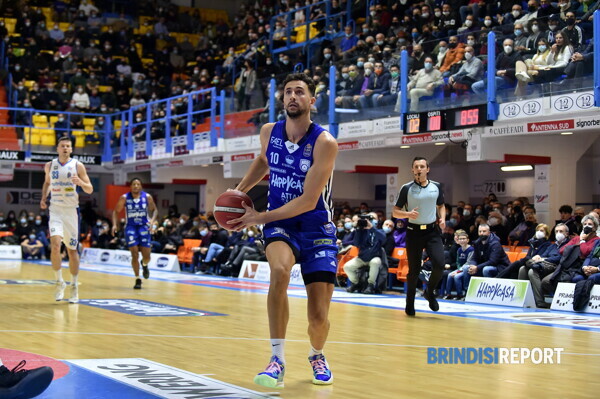 Pivot on the attack in search of glory

The involution of Happy Casa also involved Nick Perkins who was proposed as the absolute protagonist, one of the best in the league in his role, and had been the driver and the true soul of the team. For some time the opposing coaches have taken the measures and with his athletic power and his deadly “left-handed” has moved away from the “painted” to shoot at the target from the arc of the 3, emptying the area of ​​his extraordinary presence. In the same way Nathan Adrian also started playing, distorting the team defense and leaving the area empty to capture the rebounds at the complete availability of the opponents. It is up to coach Vitucci to restore tasks and roles to give the right tactical balance in defense and attack, provided that the lack of good shooters forces Perkins and Adrian to force attempts with unbuilt shots, in the hope that Raphael Gaspardo will return to its excellent standard of performance, that Riccardo Visconti and Lucio Redivo are used with more time. Coach Vitucci will have to be able to count on the experience of Jeremy Chappell, indispensable now against Napoli, and on the performance that Mattia Udom will be able to offer, even if employed in emergency roles.

Napoli is the last chance

Happy Casa Brindisi had only three days available to implement a turnaround and these are the days that have passed from last Sunday’s defeat in Brescia to the home match that will see the Brindisi team on the pitch against Gevi Napoli. The team of coach Sacripanti recovers Andrea Zerini (appreciated and esteemed former player from Brindisi from 2012 to 2015), negative result at the last swab carried out, but participants checked the medical staff also for the use of Arnas Velicka, absent due to an infection in the streets breathing and presents the “phenomenon” Jordan Parks, extraordinary protagonist with 40 points scored in 37 minutes of play last Sunday against Fortitudo with 13/19 from 2 points, 4/8 from 3 points, 2/2 to free for an evaluation of 50.

Happy Casa Brindisi-Gevi Napoli will be played at PalaPentassuglia, Wednesday 19 January, starting at 20, to try to climb the ranking that already sees 5 teams qualified (Milan, Bologna, Trieste, Trento, and Tortona) and which to be defined the results of the 4 scheduled recoveries are obtained. However, the first two races scheduled Brindisi-Naples and Brescia-Pesaro (played on Thursday 20 January) could define two qualifications for the winner of Brindisi-Naples and Germani Brescia if they beat Pesaro. The calendar is completed with Nutribullet Treviso- Allianz Trieste, with the data to be defined and on Friday 28 January Dolomiti Energia Trentino-Varese, to complete the grid of the eight formations.

Brindisi-Naples will be directed by Tolga Sahin from Messina, Valerio Grigioni from Rome and Gabriele Bettini from Bologna. The match will be broadcast live on the “Discovery Plus” channel and the commentary entrusted to the Ciccio Riccio broadcaster, conducted in the studio by Lilly Mazzone with the technical commentary of the expert coach Giovanni Rubino, enhanced by comments and interviews at the end of the match and from the room Press .

Zerbin, the moment of the “jump”: Mancini calls, does Napoli answer? Decide Spalletti

the new Capodichino station in the shape of Omega and spirals

Naples, the ASL: “The Loreto Mare hospital will close for a month”

‹ All information about the two games this Tuesday! – Hockey-News.info › Number of cases in Nepal increases, Israel issues RATs | Canberra Times