There exhibition “Keith Haring”, a Blue Palace of Pisa, from November 12, 2021 to April 17, 2022, created by the Pisa Foundation in collaboration with MondoMostre and with the extraordinary participation of the Nakamura Keith Haring Collection, curated by Kaoru Yanase, Chief Curator of the Nakamura Keith Haring Collection, pays tribute to the American artist, universally recognized among the fathers of street-art , which just a Pisa stayed in 1989, to paint on a wall of the convent of S. Antonio, the famous mural ‘All world“. The project was born from a chance meeting between the artist and the young student Piergiorgio Castellani which took place in New York in 1987. Castellani proposed to Haring to create something great in Italy and the artist accepted, and thus the “Keith Haring Italian Project“.

The monumental painting, which occupies an area of ​​180 square meters, has become over the years one of the great attractions of the city of Pisa, the keeper of one of the artist’s last great works: a hymn to joy that is still considered his testament today. artistic.

The exhibition is sponsored by the Ministry of Culture, the Tuscany Region and the Municipality of Pisa.

The exhibition presents for the first time in Europe a rich selection of works, as well 170, coming from the Nakamura Keith Haring Collection, the personal collection of Kazuo Nakamura, which is located in the museum dedicated to the artist, in Japan. They are part of the collection, and are on display in Pisa, works ranging from the first works of Haring to the last, many complete series such as Apocalypse (1988), Flowers, (1990) and various other drawings, sculptures as well as large works on canvas such as Untitled (1985). widely recognized for his brightly colored and jubilant works of art, Haring’s works are familiar and known even to those unfamiliar with his brief artistic parable because the stylized and moving men, his hearts, his dogs and his his signs in general are part of the baggage of public images and not only, all over the world, and it is precisely these that created a symbol of pop culture and art of the Eighties.

The exhibition traces Haring’s entire artistic career and the wide range of expressive techniques he investigated – painting, drawing, sculpture, video, murals, public and commercial art – starting with the drawings in the subway, Subway Drawings, 1981-1983 (white chalk / paper / wooden panels) which remain among his best known and acclaimed works, up to the portfolio of seventeen screenprints entitled The Craftsy Drawings, his latest series on paper that reproduces the first and purest visual narratives born in 1981, published in 1990, a month before his death.

The exhibition itinerary, set up in the rooms of Palazzo Blu by the architects of Panstudio, is divided into new sections: from PRINCIPLE, first section, in which he and the life in the city of New York are told, where Haring moved in 1978 to study at the School of Visual Arts. At that time, he comes out. Start with simple graphic signs to draw children, animals, hearts, televisions, angels, pyramids and little men, with white chalk, over the unused billboards of New York subway stations. The photos of his works immediately begin to circulate and his style becomes very recognizable because it creates a language that can be read at a glance, the “Haring code”. And his fame with the public grows rapidly.

The section BEYOND THE LIMITS, brings us inside the fluorescent colors that shine under the black light of the artist, through a series of five serigraphs, Untitled (Fertility Suite), published by the Tony Shafrazi Gallery in 1983, in which Haring gives space to his icons, symbols of vitality and fertility, always in motion, perhaps agitated.

Immediately after THE STORIES, in which the work The Story of Red + Blue, 1989 was written, a series of lithographs made for children that became so well known that it was used for several storytelling competitions and included in educational programs in many Americans.

HAING IN PISA, tells the story of Keith Haring’s Pisan adventure, the friendship after the fortuitous meeting with Piergiorgio Castellani, and the choral work for the realization of the mural “Tuttomondo” on a wall of the Convent of Sant’Antonio: the Church that made available the surface to be painted, the Municipality and the Province who coordinated the project, the university students who helped the artist as assistants.

We then move on to MUSIC; wherever Haring works, on the street or in his studio, he is always there. His works embody the sound of the streets of New York and the coolest clubs. He collaborates on the creation of a large number of covers, one of the best known is for a 1983 David Bowie album which depicts two men in a radiant embrace. Together with the music, the MESSAGE section: the goal to reach is to reach as many people as possible and the posters are a tool capable of establishing an immediate connection with the public. The 1982 Nuclear Disarmament Poster is speechless, but it visually calls for an end to nuclear energy. Since then Haring has produced over one hundred posters to advertise his exhibitions, concerts, products or to raise awareness of the issues he particularly cares about: AIDS prevention, gay rights, apartheid, racism, use drugs, war, violence and environmental protection.

In SYMBOLS AND ICONS, we find Radiant Baby, Dog, Angel, Winged Man, Three-Eyed Face, the series published in 1990, which includes the most iconic characters of his entire work. As we read in the diaries, The Radiant Baby symbolizes the innocence, purity, goodness and potential of each.

DISTOPIA REVEALED is a section dedicated to a phase of growth and awareness of Haring. As can be seen in Apocalipse, 1988, the matter of his art becomes deeper and more complex. As a homosexual living with AIDS, politics and fear become the dominant themes of his works. In collaboration with the beat writer William Burroughs he works on this series, offering a taste of his personal hell: each image made with the technique of collage, takes up poetry, and uses advertising, references from art history and Catholic theology to amplify the chaos scene.

THE END OF THE BEGINNING, closes the exhibition with images that better Haring’s iconic language: pyramids, flying saucers, dogs, snakes and children who mix a wandering and extraterrestrial figure. In 1990, shortly before his death, Haring published his latest edition on paper, The Blueprint Drawings. «These 17 drawings were born in a few weeks between December and January 1981. I made the originals on parchment with Sumi ink because it could reproduce all the drawings in blueprint. I regularly took them to the local blueprint, where I enjoyed trying to explain their contents to the machinery workers. Within a few weeks, in the shop, everyone was very familiar with my drawings. (…) Those prints are a perfect time capsule of my beginnings in New York City », Keith Haring New York City January 4, 1990.

Keith Haring experienced the New York upheavals of the 1980s when the American economy was in crisis and the city was prey to violence, drugs, poverty and poverty. Haring has always been committed through his works to raise public awareness on issues such as nuclear energy, the negative aspects of the technological age, environmental protection, rampant racism, drug use and prevention against AIDS. Since the beginning of his career, Haring has found a way to merge what is unequivocally recognized as art with everyday life.

And with the subject of the child, identify the most effective means of ensuring immortality. Nobody knows how many children the designer has. Two days before he dies, too weak even to speak, he will take something radiant child, then finally he will succeed: it is the radiant child. A newborn who releases rays of power received from the universe; which possesses infinite energy; that crawls incessantly, without ever stopping, towards every dove, defying every danger. And after Keith’s death, throughout the 1990s to the present day chaos, this iconic image continues to convey its message of joy. The radiant child represents Keith Haring himself. 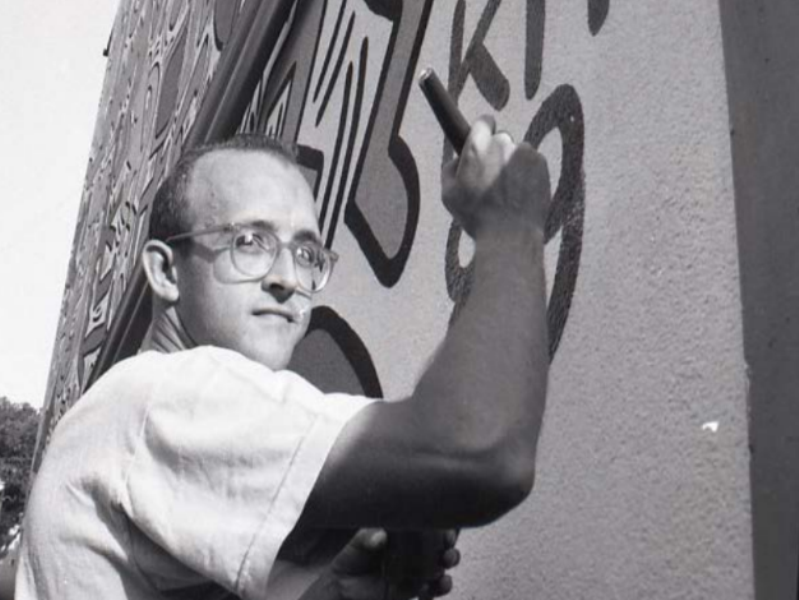 The Keith Haring exhibition opens on 12 November 2021 at Palazzo Blu in Pisa with an extraordinary formula in the first 3 days of the exhibition: visiting hours also in the evening and reduced admission ticket.

In fact, during the first opening weekend, Palazzo Blu gives the public the opportunity to visit the exhibition KEITH HARING – which presents over 170 works by the American artist, coming from the Nakamura Keith Haring Collection – at extraordinary times: Friday 12 November from 2 pm to 10 pm , Saturday and Sunday 13 and 14 November from 10 to 22.

Visitors who buy tickets directly from the exhibition will be charged a rate of 10 euros (instead of 12), while for those who buy online on Vivaticket the cost will be 7 euros (plus 2 presale) instead of 14 euros. 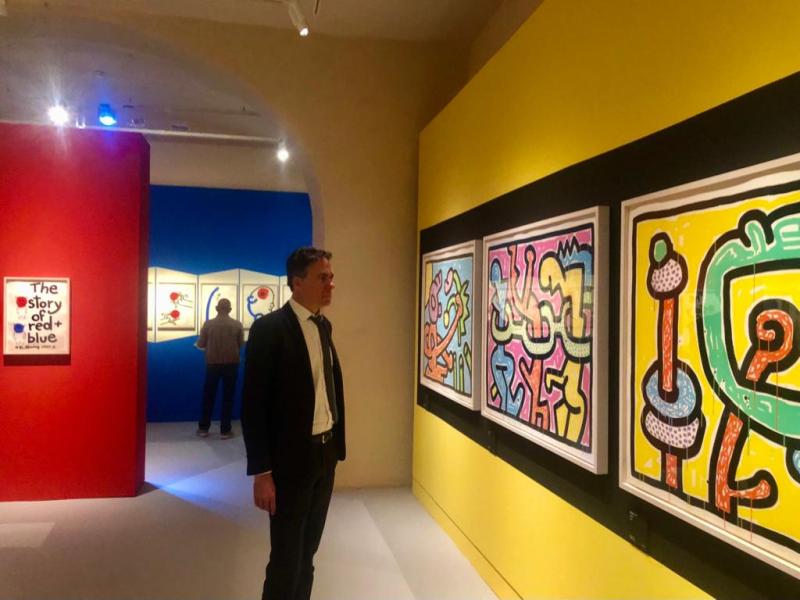 The presentation of Keith Haring’s exhibition took place this morning at Palazzo Blu. Below is the intervention of Mayor of Pisa Michele Conti:

“Another major exhibition celebrating an international artist opens at Palazzo Blu. In fact, the annual appointment awaited by Pisans, tourists and art lovers is renewed, who will be able to receive a selection of Keith Haring’s works in Europe for the first time from Nakamura Keith Haring Collection, a museum dedicated to the American artist in Japan. Once again the merit goes to the Pisa Foundation, which thanks on behalf of the city for its perseverance in honoring the commitment to liven up the city’s cultural landscape by projecting Pisa every year into the category of cities of art chosen by thousands of tourists as a destination for a stay dedicated to visiting new and interesting exhibitions.

This year’s event is particularly awaited in the city, also considering the emotional bond that the Pisans have towards Keith Haring who stayed in the city in 1989, creating one of his last works before the disease snatched him from life too soon.

To see today, with the pastel colors inspired by the buildings of the Pisan riverside, the unmistakable visual code and the joyful dance of the figures that still vibrate the wall, it is hard to believe that “Tuttomondo” is over thirty years old. Instead, many have passed since Haring created the famous mural that represents a real act of love towards our city, drawing a heart in the upper part, a Pisan cross in the center of the wall and noting the famous phrase in his diary. : “I am sitting on the balcony looking at the top of the Leaning Tower. It is really very beautiful here. If there is a paradise, I hope it looks like this ”.

Here I am sure that the Pisans will know how to reciprocate this great affection by rushing to see the works of Keith Haring arrived from Japan, to pay the right homage to one of the fathers of street art and one of the most appreciated contemporary artists in the world.“.

All the news from Pisa

Italy, violence against women: Tunisian attacks the ex on the street in Pisa, identified by the police – il Fatto Nisseno

‹ Rouen becomes “Unesco’s creative city for gastronomy” › Closer to the Netherlands, let’s get started with organic