Heavy rains hit Attica after one in the afternoon. Giannis Kallianos warned earlier about the deterioration of the weather, as the bad weather “Ballos” continues to prevail.

“In a short time, a core of storms coming from the Saronic Gulf will move towards Attica. The weather will worsen. Attention”, wrote Giannis Kallianos, warning that the weather will deteriorate again, since the bad weather has not subsided.

Indeed, about 50 minutes later, at 13.15, heavy rain started again with lightning and thunder, while today, Friday, was strong and the comfortable ones prevailed.

Besides, from 13.00 the sky in Attica had darkened.

Due to the accumulation of water, there is a new traffic stop on Piraeus Street in both streams, from Petrou Ralli Street to Hamosternas.

There is also a traffic stop on the Egaleo ring road from the height of the refineries.

Bad weather Ballos returns to Attica, while strong storms will hit eastern island country, as the phenomena of western Greece and the Peloponnese will move northeastThe This warning was addressed earlier by the director of the National Meteorological Service Thodoris Kolydas in a post on Twitter. Mentioned features:

Strong storms in the Eastern island country. The phenomena of western Greece and the Peloponnese will move NE. Attica will be affected again soon

The forecast concerns heavy rains and in places strong storms, throughout the country and in Attica.

The evolution of the bad weather “Ballos” until Saturday morning

Rains and thunderstorms are expected from the bad weather “Ballos” during the rest of Friday 15/10 the people who will be strongest in Thrace, Macedonia, Sterea, Peloponnese, Southern Ionian and Northern and Eastern AegeanThe 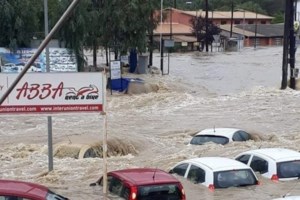 The effects will gradually be reduced mainly in the northern and western parts of the country. Chance hailstorms exists in the Aegean and Ionian as well as in coastal areas of the Peloponnese, the Eastern Mainland and possibly Halkidiki. It is noted that in the eastern parts of the Aegean, the hail will probably be large.

On the night of Friday 15/10 to Saturday 16/10 the phenomena will be weaker and will mainly affect Thrace, Macedonia, Sterea, Peloponnese, the Southern Ionian and the Aegean.

The map shows the areas where the strongest phenomena are expected. Heavy rains and thunderstorms during the night

As reported by Meteo.gr, it continues to fill the country of bad weather “Ballos” today Friday. Heavy rains and thunderstorms occurred from the beginning of the twenty-four hour period while snowfall was recorded in the mountains of Western Macedonia and Pindos.

The figure shows an edited image of the European meteorological satellite Meteosat-11 taken shortly after 8 am.

With orange and red shades show the highest news, the peaks of which, according to calculations of specialized algorithms, exceed 12 km. Inserted in the same figure is a table with the 8 stations of the network of automatic meteorological stations of the National Observatory of Athens / meteo.gr the highest rainfall heights from the beginning of the twenty-four hour until the morning of Friday 15/10. Detailed weather throughout the country on Friday

MACEDONIA, THRACE
Weather: In western Macedonia clouds with heavy rains from time to time and in the mountains temporary snowfall. The effects in the afternoon will weaken.
In other areas it rains and mainly in the sea and coastal sporadic storms. The effects will be strong in places.
Winds: In eastern Macedonia and Thrace from eastern directions and in other areas from northern areas, 4 to 6 and in the Thracian locally up to 7 Beaufort.
Temperature: From 10 to 16 degrees Celsius. In western Macedonia from 04 to 11 degrees Celsius.

IONIAN ISLANDS, EPIRUS, WESTERN STEREA, WESTERN PELOPONNESE
Weather: Cloudy with rain and thunderstorms in places strong. Temporary snowfalls will occur in the mountains of Epirus. From the afternoon the phenomena in Epirus will weaken and at night they will stop.
Winds: South from south 7 to 8 beauforts. To the north from east, turning from the afternoon to north northwest, 5 to 7 and locally in the Ionian 8 beauforts.
Temperature: From 12 to 20 degrees Celsius. Inside Epirus from 06 to 12 degrees Celsius.

THESSALY, EASTERN CENTRAL, EASTERN PELOPONNESE
Weather: In Thessaly clouds with occasional heavy rains and mainly in the east sporadic thunderstorms. In other areas north and thunderstorms, strong in places.
The phenomena at night will ensure.
Winds: North north northwest 5 to 6 and locally 7 Beaufort. In the rest from legal addresses 5 to 7 and locally 8 beauforts.
Temperature: From 13 to 21 degrees Celsius. In the north 4 to 5 degrees lower.

CYCLADES, CRETE
Weather: Cloudy with rain and thunderstorms in places strong.
Winds: From south 6 to 7, gradually 8 and possibly locally 9 Beaufort.
Temperature: From 17 to 27 degrees Celsius.

EASTERN AEGEAN ISLANDS – DODECANESE
Weather: Cloudy with rain and thunderstorms, strong in places.
Winds: South southeast 6 to 7 and gradually 8 Beaufort.
Temperature: From 16 to 26 degrees Celsius. In the north the maximum is 4 to 6 degrees lower.

EUBOEA
Weather: Cloudy with rain and thunderstorms, strong in places.
Winds: South from south 6 to 7 and gradually 8 Beaufort. In the north north 5 to 6 and locally 7 beauforts.
Temperature: From 14 to 20 degrees Celsius.

On Saturday Heavy rains and thunderstorms will affect the eastern country, with a receding order from the afternoon. There will also be a noticeable drop in temperature in northern Greece by 6 to 7 degrees Celsius. Meeting of Zelensky – Erdogan – Guterres on Thursday in Lviv

Antigoni Drisbioti won the gold in the European athletics championship

Donetsk: 5 foreigners are on trial for “wage action” by the separatists

‹ Biker broke at intersection, two years in jail required for young driver › 50 years after its sinking in Annecy, how France forged its legend