The remaining borders to Sweden are opened

It has become much easier to drive across the border between Norway and Sweden this week, as the governments of both countries decided to release most of the remaining restrictions from 1 October. On Tuesday, minor border crossings were also opened in remote areas that were completely closed during the Corona pandemic, with only sporadic checks. 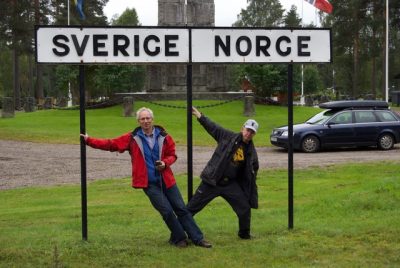 It can once again be fun to cross the border between Norway and Sweden, without waiting in long queues or having to undergo tests. Smaller border crossings that were completely closed during the Corona crisis also reopen this week. PHOTO: NewsInEnglish.no

Norway’s Home Guard soldiers have packed up and withdrawn from the remote border crossings, some of which are on gravel roads. Control checks are abolished and obstacles removed, and it is up to the passengers themselves to follow the rules.

Norwegian Broadcasting (NRK) reported that all intersections along Norway’s long border with Sweden will be open from midnight on Wednesday. The Covid-19 test center will also be dismantled.

From now on, the border patrol will only carry out sporadic checks of those who drive through, says Pål Erik Teigen from the Innlandet police district to NRK on Tuesday. He noted that some travelers will still be expected to get tested within 24 hours of entering Norway, including those who are not fully vaccinated and those who come from areas where the infection is high.

“Even those who feel bad should take a Covid test,” says Teigen, “but now it is based on the honor system and up to those involved to follow up.”

However, the pandemic is not over yet …
He stressed that “the infection remains within society” on both sides of the border, “and we should all do what we can to keep it inside.” Motorists who cannot document that they are fully vaccinated will still be led to test stations at the major border crossings where test stations remain, such as those at Svinesund and Magnor in the south and Storskog in the north, and at all airports with international flights.

Teigen, who has been responsible for all border crossings in the Innlandet region in eastern Norway, noted that it has been a large and unusual job. Soldiers and police had not had to stop travelers at the border for decades. Now daily life returns to normal, and Norwegians can even continue shopping in Sweden (where prices tend to be much lower than in Norway) without too much trouble.