Dozens of passengers lived this Saturday one of the biggest scares of their life on board an Iberia flight that would connect Vigo to Madrid, tell the newspaper Quincemil.

Like Portugal, Galicia was also under a huge storm. The flight was scheduled for 21:40 (20:40 in Portugal), but left outside the scheduled time: it was almost 23:00.

A few minutes after getting up, it was announced over the loudspeakers that an aircraft had to make an emergency landing. The pilots declared “Help“, A code word for emergency. It is used all over the world in communications issued by aircraft or ship crews when they are at risk.

According to that newspaperPassengers traveling on the plane define the experience as “one of the worst moments of their lives”. They report that there were “times of nervousness and fear, even people vomiting and anxiety attacks” after announcing the need for an emergency landing. It would be in Portugal, in Porto.

The Quincemil passengers were told that “there was a technical problem” but only related to a take-off. However, another witness guarantees that page a hostess to ask passengers “if they were trained to be the first to jump onto the emergency mat and help the rest of the passengers down as a forced landing was going to be made”.

Fear was general and visible to all passengers “and even to the entire crew” of the plane.

The landing in Porto went well. No major damages and no victims to register. In total, it was a nightmarish hour and a half on a plane with “a technical flaw” that none of the dozens of passengers managed to understand.

Thanks to the crew of @Iberia
We have landed bien (in Oporto) after an emergency by the landing train. He pasado del miedo thinking about my family a la Risa nerviosa. pic.twitter.com/kZWZLk4PtC

Arrival in Porto… and a new nightmare

At Sá Carneiro Airport, safe and sound, passengers were far from imagining what was still ahead. “We didn’t have information and they just wanted to expel us from the airport to wash hands“, they told that periodical.

Airport officials informed them that “they had a hotel nearby”. Outside, an authentic stormy night. Transport? There was not. It was three in the morning in Portugal.

In Porto, the nightmare of affected passengers continued into the night

“To get to the hotel we have to cross flooded roads and no one from the airport accompanied us there. We were all drenched, dead from the cold, it was three in the morning and there were people who had no room and had to sleep in the hall with soaked clothes ”, said one of the passengers.

Passengers accuse Iberia of “lack of respect and even humanity”

This Sunday morning, passengers say that received an email from Iberia informing them that they took a bus to Madrid available at 12:00. “And even so, he was late. It only arrived at 14:00”, they referred to the Quincemil some passengers who used the service. Others chose to rent vehicles to reach their destination. 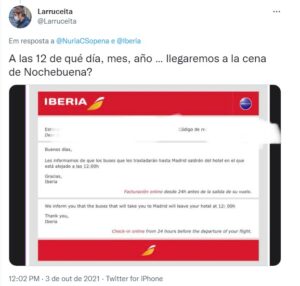 “This email was the only contact that occurred from Iberia within 12 hours of the forced landing. We had no food, no drink and no way to return to Spain ”, told with anguish several of those who were on the plane.

“There were people who went through one of the worst moments of their lives”, they affirm.

So far, there is no record of a new reaction from Iberia.

Does Portugal have twice as many rulers as the Netherlands? :: zerozero.pt

The Government of António Costa “got the hang of it” – Portugal

‹ 293 Afghans applied for scholarships in Portugal › Charlene of Monaco, weakened, she worries her fans