The ceremonial unveiling of the plaque commemorated the 110th anniversary of Janšt’s birth. He was born on December 9, 1912 in Troubsk near Brno. From July 1936 he worked as a field aerial gunner-radio operator at the Prague airport. After the Nazi occupation of Czechoslovakia, he emigrated to England, where from September 1940 he participated in the first air combat missions of the 311th Bombardment Squadron RAF. In 1943, he also became a member of the Czechoslovak State Council in London, where he served as chairman of the military committee.

During the unveiling, Zachová recalled the pride that Janšta and other Slovak airmen felt in the service of the Czech-British Royal Air Force. “Each of us wanted to prove that the Czechoslovak nation is worthy of freedom, that it wants and will fight for it until the end. We were true Allied soldiers and rendered good service to the British Empire” Zachová quoted her father in an interview for the December issue of Novin Prahy 2. According to Zachová, her father was not broken either by war experiences or the subsequent persecution of the communist regime. After the war, he left the army himself because he did not agree with the growing Bolshevik ideology. Thanks to this, he was not imprisoned, but he still worked as an asphalt worker from 1952. In 1991, he was rehabilitated and in memoriam promoted to colonel of the Air Force.

Černochová emphasized that heroes like Janšta have the right to have their legacy remembered by present and future generations. For example, in October 2021, the commemorative plaque of the commander of Czechoslovak pilots in the RAF Karel Janoušek was unveiled in Malá Štěpánská Street in Prague. At the time, Černochová was the mayor of Prague 2. As the Ministry of Defense, she continues to promote the veneration of the monuments of heroes, of which, according to Černochová, the Czech Republic has many, even though the communist regime tried to convince the nation otherwise. 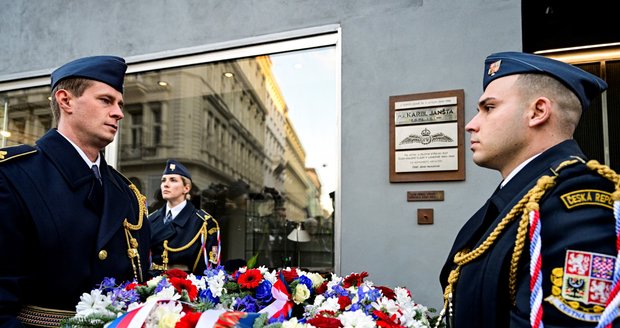 ‹ daily strike at Valmy hospital over a question of bonuses › Cracow. Consecration of the Virgin at Wawel. Other women vowed a life of chastity. Reply to prayer, penance and works of mercy