The roof of the Prague Congress Center has an area of ​​almost seven thousand square meters. This is roughly the playing area of ​​the football stadium in Eden, where the Czech national team plays its matches. And it is precisely on such an area that photovoltaic panels will take care of energy starting next spring. In total, two thousand of them will be installed.

“We were thinking about a photovoltaic power plant on the roof of the Congress Center several years ago. Even though we have agreed a very good price by the end of the year, events on the energy market forced us to speed up this plan, which is why we decided to install it during the Czech presidency.” stated the Chairman of the Board of Directors of the Congress Center Prague (KCP) Aleš Bartůněk. KCP now provides a haven for informal meetings of the EU Council.

The project does not need to include any batteries, as the building immediately consumes all production. Photovoltaics should cover about ten percent of its consumption. The power plant will have an output of one megawatt and, under the conditions of the Czech Republic, will produce about 1,100 megawatts per year.

“With the average annual consumption of a Czech household of three and a half megawatt hours, this means coverage of about 314 households,” described Martin Schreier, spokesperson of ČEZ. Its subsidiary ČEZ ESCO participates in the construction together with GreenBuddies. Photovoltaics should mean savings of five and a half million crowns per year for the Congress Center.

Photovoltaics in the Congress Center

The whole thing has one more benefit – the solar panels will save ten thousand tons of carbon, which would otherwise be the case if the Congress Center continued to use electricity produced in thermal power plants.

Installing photovoltaics on the roof of Vyšehrad was not easy. Above all, it was necessary to negotiate with the preservationists. “It is a modern building from the eighties of the twentieth century, which, however, is located in the city’s heritage zone. It meant meeting some requirements. For example, to prove that the sun’s rays falling on the surface of the photovoltaic power plant will not dazzle the visitors of the observation tower on Petřín.” describes Schreier.

It was not allowed to drill into the roof of the building, to fix the load with the help of concrete tiles, which together weigh over 62 tons. “The panels are installed with a slope that guarantees minimal mutual shading, thanks to which the highest possible performance will be achieved. In order for the roof to be as least loaded as possible, a light steel structure was chosen, which counts as a reserve for above-average snow cover. And in order not to disturb the roof of the anchor structure, the weight of the system is usable in combination with the load of the concrete segments.” recounts Schreier.

The power plant should be commissioned in the spring. It depends on when I get all the necessary permits and when it is approved.

This is not the first austerity measure for the Congress Center. Similarly focused projects include the modernization of heating, air conditioning or lighting. The total savings amount to 32 million crowns. The ENESA company, which falls under the aforementioned ČEZ ESCO, participates in everything within the framework of the Energy Saving Project (EPC). It focuses precisely on modern energy projects, decarbonization and reducing climate footprints for industrial customers, but also for municipalities and institutions.

In the case of solar panels for KCP, it was the so-called Photovoltaic project for 1 crown. This means that ČEZ ESCO will build it at its own expense and will also operate it. The investment will subsequently be repaid by the Congress Center in the price of the electricity consumed. All this is secured by a thirteen-year contract. When it expires, the Congress Center will buy the photovoltaics for a crown and produce its own energy. 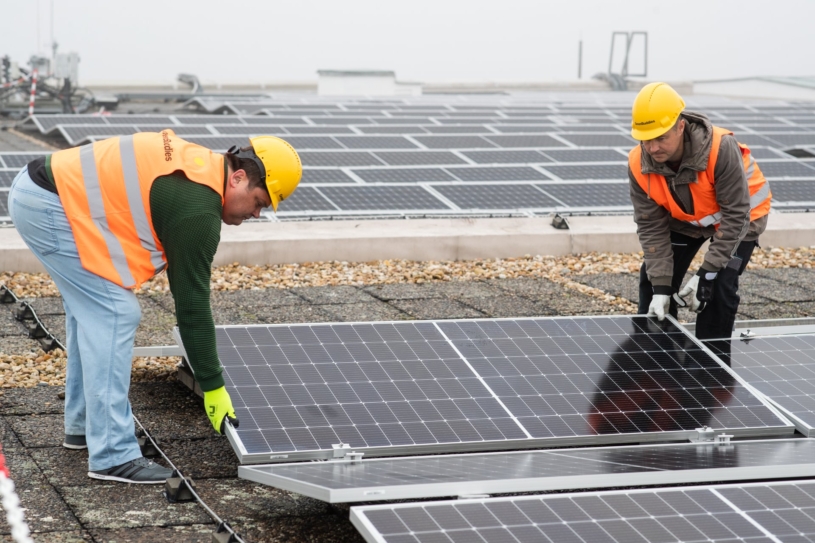