After the archives of the Ministry of German Affairs were opened, the facts about the treatment of Lithuania abroad became clear

Footage from 1991 proves that there was euphoria in Lithuania then. This is the first in the Soviet Union. But there was no such joy in Western Europe. German foreign ministries have opened documents from 1991. They include memos, minutes and letters related to NATO eastward expansion and the collapse of the Soviet Union.

Here you also choose the German chancellor of that time Helmut Kohli aspirations in relation to governing Lithuania. He was convinced that Vilnius was going down the wrong path.

“H. Kohli was always afraid that we would spoil German reunification for him. So what, everyone has the right to handle their own claim”, – LNK the first leader of the restored Lithuania remembered the events of that year Vytautas Landsbergis.

Based on the archives, the German publication “Der Spiegel” quotes H. Kohl, who wanted Lithuania, Latvia and Estonia freedom would wait another ten years. And then they would not be accepted into NATO.

The then Minister of Foreign Affairs of Lithuania Algirdas Saudargas told LNK that at that time no one said that “Lithuania is making a mistake”.

“No, (then German foreign minister, author) Hans Dytrich Genscher is an excellent diplomat. We had a very nice talk with him in 1991”, A. Saudargas recalled.

The German Minister of Foreign Affairs arrived in Vilnius in September 1991, already after the events of January 13.

“I can say that he asked – do you really want to get independence. If anyone wants to, he should see Germany’s position on this issue. But I certainly had a very easy answer to that,” said A. Saudargas.

for Germany was an important leader of the Soviet Union at the time Mikhail Gorbachev.

“I was definitely in Germany in 1991 and they worshiped M. Gorbachev, naturally they worshiped him. The nation united and it was thanks to M. Gorbachev. It must be admitted. Germany gave the message – realpolitik, and M. Gorbachev is the lord of the new times, and you are here biting his heels,” the signatory, a member of the Seimas, recalled to LNK. Eugene Gentvilas.

The exact words of the then German Chancellor H. Kohli, according to the protocols, were as follows.

“If the Germans are helping the Soviet Union, it is primarily out of gratitude for Mr. Gorbachev’s role in Germany that they unite,” the documents testify to the then German Chancellor H. Kohli’s statement in 1991.

Germany feared a domino effect – if The Baltic States They will leave the Soviet Union, followed by Ukraine, then the entire Soviet Union will collapse, and M. Gorbachev will fall.

German Chancellor H. Kohli’s conclusion was: “The collapse of the Soviet Union is not in our interest.” What’s more, he said, such a procedure would be a “disaster.”

“You felt that the little ones supported us. But I will not say that it would be felt that they were against”, V. Landsbergis recalled.

A. Saudargas, the Minister of Foreign Affairs of the newly independent Lithuania, says that then the German opinion was enough. And how important she was is also illustrated by her trip to London, seeking intercession for Lithuania. But British diplomats suggested he travel to Germany.

“They told me to go to the Germans and talk to them,” said A. Saudargas.

The protocols allow us to conclude that Germany’s friendship with the Kremlin prompted German Chancellor H. Kohl to turn a blind eye to the events of January 13. 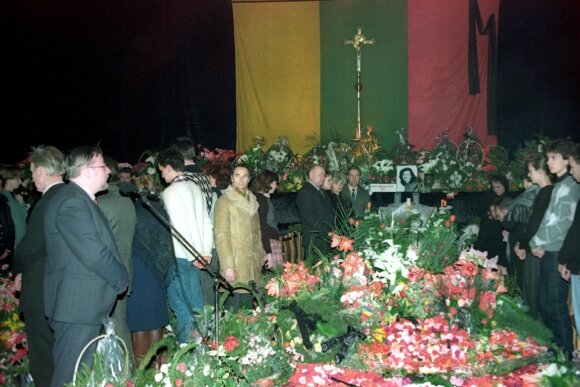 Vilnius, 1991 January 15 (ELTA). Vytautas Landsbergis is speaking. Farewell to the dead on January 13 at the Vilnius Sports Palace. After the tragic 1991 the events of the night of January 13.

a few days earlier, H. Kohli and M. Gorbachev talked by phone. The diplomat who listened to the call noted that the two exchanged hearty greetings.

M. Gorbachev complained to the German Chancellor that it was possible to continue without certain measures. H. Kohli’s answer was: “in politics, everyone also has to be open to detours, it’s important that you don’t lose sight of the goal.”

M. Gorbachev ended the aforementioned conversation by saying that he greatly appreciates the German Chancellor’s position. According to the protocol, the word Lithuania was not spoken. But unofficially it was said differently.

“The Germans officially declared, knowingly, the condemnation of such brutal actions and killings,” recalled former foreign minister A. Saudargas.

“Germany is sucking the udder, clinging to the pipes and doing everything so that as many pipes as possible come from Russia, as much milk flows as possible, or in this case, gas,” said signatory E. Gentvilas.

The publication Der Spiegel says these open archives could further inflame the already ongoing debate in the country about Germany’s policy towards Russia.

You can find the full LNK report here:

K. Pupinis. Lithuania is a gray dm on the European electric vehicle charging path emap. When will this change?

‹ Charlène of Monaco “crossed paths” with Matthew Perry in treatment in Switzerland, revelation about their stay › AS Monaco, its love for football… Exclusive interview with Gaël Monfils