Paris: an “Olympic ring” to respond to the lack of public swimming pools and gymnasiums in the capital?

It is a project carried by the elected Communists of Paris, who wish to increase the number of swimming pools and other public gymnasiums in the capital. To do this, they are authorized to renovate and raise existing public sports facilities to create, without having to buy land, up to 100 new gymnasiums in Paris and thus increase reception capacities.

And since the land available in Paris is rare and expensive, he just intends to start from the existing one, that is to say several aligned tennis courts, an old disused building or even dingy changing rooms.

In total, they therefore drew up a list of 17 sites, disseminated along the peripheral four rooms in Paris, which could easily be transformed, renovated and extended to accommodate new practitioners.

An “Olympic ring” all around Paris

So many projects, which – if they see the light of day – could double the number of gymnasiums in Paris, going from 51,200 m2 of infrastructure today to 160,000 m2, and this, without any “artificialization of the soil”. And this is indeed the major argument of the elected Communists, who judged that covering a tennis court located near the ring road could both renovate it, protect it from bad weather but above all protect it from the Pollutionwith air renewal systems that do not exist today on uncovered tennis courts, and this, without new footprint.

A necessity according to them as the lack of sports equipment is glaring in the capital, and this, in a context where the sport is often prescribed to relieve sick people and where more and more children are in a situation of obesity. “In Paris, there are 14 sports facilities for 10,000 inhabitants, compared to 46 on average in France”, indeed deplores Nicolas Bonnet-Ouladj, the president of the communist group at the Council of Paris, state making of a lack of swimming pools, gymnasiums, stadiums or ice rinks.

Furthermore, there is a public health emergency.

In 40 years, children have lost 25% of their cardiovascular capacity. In the Paris region, 31% of children do not practice any sports activity.

It is often due to a lack of slots and infrastructure.

“It is a distressing reality compared to the rest of France, and the poorer the districts, the greater the deficit in sports equipment”, storms the one who is elected in the 12th arrondissement of Paris, estimating that “we do not can remain last in the class, even as we prepare to host the Olympic Games [de Paris 2024]”. “Imagine if we have a tsunami of requests after that, and opposite, no equipment”, he wonders, explaining that many sports clubs are today “forced to refuse admissions” and have waiting lists “of 200 to 300 people”.

And to take the example of the current urban project in the Python-Duvernois district, in the 20th arrondissement, which plans to create a sports city, with 5 new gymnasiums. That is 10,000 m2 additional stacked for a maximum of different sports practices with a minimum footprint. “We must densify the sports offer and bring public equipment wherever possible”, explains Jacques Baudrier, elected communist and deputy mayor of Paris in charge of monitoring construction sites, who explains that in a single building, we are going to increase the sports offer by 50% in the 20th district.

A project submitted to the vote of elected officials

A few days before the vote on the budget, at the next Paris Council which opens on December 13, and while the City is working on the drafting of a new bioclimatic local urban plan (PLU), the elected Communists are therefore calling of their wish the vote of their amendment, which notably includes an envelope of 150 million euros of program authorization and 15 million of study credits. Enough to launch studies for the first 6 sites deemed to be priorities. 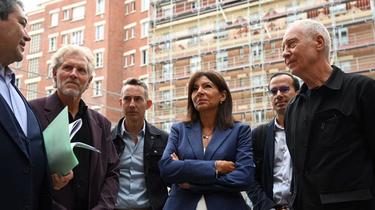 The “Olympic ring”, “it is a long calendar”, decide the elected Communists, who propose a project which runs well after the end of the mandate ofAnne Hidalgo, in 2026. The goal? Reach between 20 and 25 new gymnasiums by 2027/2028, and thus achieve a ratio number of inhabitants/number of sports facilities “a little less far from the French average”.

“The increase in the property tax should yield between 500 and 600 million euros, to fill the 450 million euros needed for the investment budget. What do we do with the remaining 100 to 200 million euros?” asks Nicolas Bonnet-Ouladj, who recalls that access to sport is a “fundamental need”.

Netanyahu-Macron meeting in Paris this Thursday

‹ The Netherlands as group winner to the eighth final World Cup against Qatar › EY Luxembourg: rising turnover and probable split