Lithuania is waiting for an important decision from the EU: it will be extremely difficult to achieve its own

Last Friday, the energy ministries of the European Union (EU) approved several measures to limit electricity demand and at the same time redistribute the income of companies in the energy sector to end users, the EU Council reported. Final decisions are expected this month.

Out of all the solutions presented in the Community, Lithuania has the most gas price limitation, but the European Commission (EC) did not even present it in mid-September, and last Friday the ministers gathered to discuss it. However, this issue is now being returned to, as the recent comments of the head of the EC show.

Bjorn Inge Vikas, senior analyst at Value Insight, a Norwegian energy research company, told Delfi on Monday that it is difficult to impose price “ceilings” without risking unintended consequences at the same time.

“The balance of supply and demand may be disturbed, and at the same time, the “ceiling” may harm initiatives to reduce demand (that is, savings initiatives – ed.). Reducing demand is key for Europe to survive the winter, while increasing the supply of non-Russian gas (liquefied natural gas (LNG), Norway, Africa),” the analyst says.

We can see that electricity prices have become very low and the French are even taking advantage of this, as much as they can buy there from Spain,” said V. Jankauskas.

He added that for the effectiveness of such a scheme, it is important that the whole region approves it, otherwise, if it is implemented in the country, it will be used by others. According to the energy expert, it is difficult to say whether it is worth aiming for a large-scale “ceiling” for gas or a narrower one.

“In some countries, gas is the main (source) for production, but it also makes good use of industry.” After all, industry in Germany is a big user of gas. There are also many residents who heat with gas,” he says.

Romas Švedas, a lecturer at Vilnius University’s Institute of International Relations and Political Sciences (TSPMI), tends to support a broader model of limiting gas prices, rather than just, for example, a “ceiling” for gas-fired electricity generation.

“Then it would be quite difficult to distinguish where there is electricity and where there is no electricity. In relation to the companies that buy, then again there would be uncertainty: if the price is lower for electricity production, if it is not electricity, it is higher (…). This would only complicate the system and its control.

Enter “ceiling” and that’s it. Because the types of energy are related, if it is possible to replace one another, intertwined, then after such considerations there would be more uncertainty than clarity. Enter the “ceiling” of the Kremlin and dot”, says R. Švedas.

According to him, the most important question is about the gas roads, because “from the side of the European Union, it is necessary to show that the Union can accept an effective decision of the Kremlin.”

Norway’s BI analyst Vikas says that putting restrictions on any one source (say, Norway or Russia) will only reduce the source’s prices, and may have little effect on prices at most because other channels (for example, LNG) will be available.

“I don’t know what the politicians’ decision will be, but I know that these discussions are difficult. If they continue the talks in this direction, I think that a milder intervention is the most likely, instead of putting a strict broad “ceiling” on the wholesale price of gas or all imports,” said the expert.

“We are discussing the upper limit of the prices of gas used for the production of electricity,” U. von der Leyen informed the members of the European Parliament meeting in Strasbourg.

“This cap would also be the first step on the road to structural reform and overall reform of our electricity market,” she added.

Von der Leyen did not specify whether the proposed price cap would cover all gas imports, not just gas, which comes mainly by pipeline from Russia, but also LNG, which can be shipped from around the world.

Brussels has favored curbs on pipeline gas prices to cut Russian exports and prevent access to the pyjama-financed war in Ukraine. However, when it comes to capping LNG prices, there are fears that sellers may simply divert supply to another market.

V. Jankauskas says that at a time when Germany and the Netherlands are against the idea of ​​limiting prices, it will be difficult to reach a consensus.

“The argument is as follows: what if we set a price ceiling now and there will be a very high demand in winter, prices on international markets will be higher and no one will simply want to transport that gas to us?” Will there not be such problems that we will not have gas. Those arguments are, of course, very serious.

The first option was to set only Russian gas prices (restrictions), then the Russians said you won’t get gas at all.” Now there is the same fear that the same may happen with gas as well, if such a limit is set”, says V. Jankauskas.

Responding to the EC chairwoman’s proposal and commenting, the expert may agree, however, he tends to believe that the negotiations will be very difficult. It is said that a narrower compromise can be reached.

“I think that the negotiations are difficult, especially if we are talking about jointly setting some kind of limit for gas prices. Other options are also being discussed: maybe set only for electricity production – maybe a compromise can be found, but otherwise I think it will be really difficult. Today, I am looking at comments from foreign experts that it is not clear whether we will not get gas at all”, said V. Jankauskas. 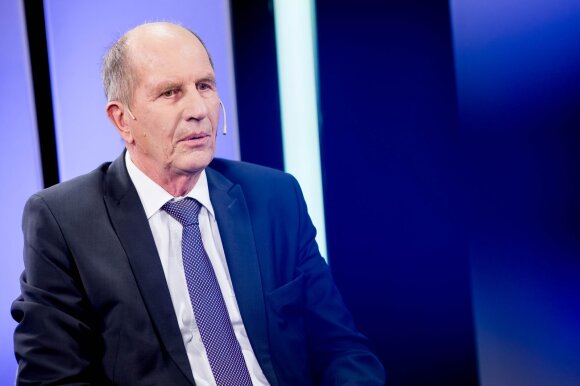 BI Vikas says that it depends on what “ceiling” is set, it can significantly reduce the price of electricity, but at the same time increase gas consumption.

“The European Commission is aware of this risk and has hinted several times about the need for additional measures to balance the aforementioned risks,” says the analyst.

He says he believes that capping gas prices is not the best solution after all.

“Personally, I would agree with the Norwegian Prime Minister that price ceilings are not the right “medicine”. A certain redistribution of high incomes to electricity and gas producers is already ensured, but it must be decoupled from energy bills for industrial and domestic consumers, in order not to damage the market and initiatives to reduce demand”, says BI Vikas.

Norway, a major gas exporter, is independent of the European Union, but the proposal to apply the “ceiling” is also opposed by bloc members – the Netherlands, Germany, and Austria. Before the EU Council on September 30, the 15th energy ministers sent a letter to EU Commissioner Kadri Simson with a request to consider price limits that “should be applied to wholesale natural gas transactions and not limited to imports from specific jurisdictions”, according to the letter, which was also signed by France, Italy, Polish ministers.

The Minister of Energy Dainius has said that limiting gas prices is the only measure that can prevent high energy prices throughout Europe. A two-step strategy can achieve this. 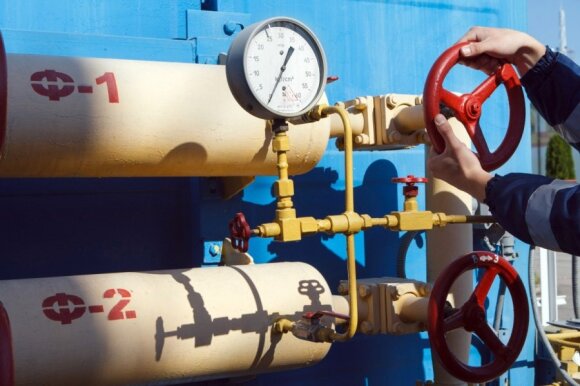 “We propose to act on the notification and set a ceiling price for gas used for electricity generation. The second step we should take is to put a price cap on natural gas in the wholesale market.

The EC proposes upper price limits set only for natural gas imported via pipelines (in principle, Russian – ed.), does not solve price problems and does not reduce the financial burden for household energy consumers and businesses”, D. Kreivys was quoted in the ministry’s report.

On Thursday, he wrote on the social network that on Wednesday “we received a letter from the President of the European Commission, Ursula von der Leyen, to the member countries and the EWC (European Council – ed.) for the definition of the European energy price reduction policy”.

According to him, a “break” is likely after last Friday’s EU Council.

“The letter tour is also very pleasing to the Lithuanian work that was carried out with the EC meeting in Brussels and as a member of the conversation. All points of minimum measures in U. von der Leyen’s letter are in line with what we were aiming for and working for,” explains the minister.

According to D. Kreivis, it is proposed that the European energy platform jointly, at the level of the entire EU, buy gas from reliable partners (the USA and Norway) and store this gas. This is to avoid situations where countries compete with each other for existing gas and thus the price of several gases.

At the same time, a proposal is made to create a new EU gas price index that reflects today’s realities, and a new wave of investments in energy infrastructure is announced.

“Finally and most importantly, the EC proposes to start discussions on determining the time price ceiling for gas used for electricity production. This would substantially reduce electricity prices across the EU. The President of the EC emphasized the necessity of this decision both in the letter and in yesterday’s speech to the EP, so this signals a serious attitude that the decision on the ceiling of gas prices will be adopted”, hopes the minister. 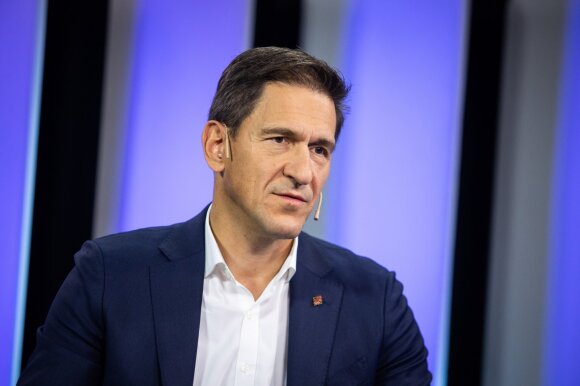 President Gitanas Nausėda says that at the informal European Council of Leaders (ECC) held in Prague on Thursday, decisions on the gas price “ceiling” and other measures to control the energy crisis will not be taken. He expects a decision to be made at the end of the month, ELTA reported.

He claims that representatives of EU countries have a new position, because 17 countries support Lithuania’s position regarding the “ceiling” of gas prices, but there are countries that take other positions.

“Some are categorically on the other side. I wouldn’t say that very categorically, but nevertheless, Germany and some other countries are looking for national solutions to control the two prices, and the Commission refuses to take a compromise position, proposals that meet the interests of both sides are being sought,” said the manager.

It is strictly forbidden for DELFI to publish the information for use on other websites, media or elsewhere or to distribute our material in any form without consent, if you do, it is necessary to credit DELFI as the source.

I.Šimonytė discussed further cooperation with the commander of the Pennsylvania National Guard

leads and Lithuania negotiates who is the electricity exporter

Due to EU support, Lithuania will still have to stretch: we are lagging behind in six indicators