Boycott of the World Cup in Lyon. For Jérémie Bréaud, “green or left-wing mayors are indignant at the last minute” –

Text: Morgan Couturier – While the City of Lyon unsurprisingly joined the procession of cities excluding any representation of the World Cup in Qatar, the opposition was quick to react to this measure. Starting with the mayor of Bron, Jérémie Breaud who invites the ecologist town hall to “stop its hypocrisy”.

We had written it, the boycott of the Football World Cup in Qatar was not only working for the happy ones. And in fact aroused its share of disputes. If such a decision, priced by the town hall of Lyon, provoked various lively conversations on the web or in Lyon bars, it above all made the political class react. And so the opposition, whose disapproval was illustrated through Jeremiah Breaud. On Facebook, the mayor of Bron therefore wanted to be offensive, not hesitating to go on the attack against Gregory Doucet. The elected LR obviously condemned to human rights perpetrated by Qatar and certain environmental heresies of this World Cup, but above all points to the obviously suspicious timing of such a decision.

His attachment to the foot, Jérémie Breaud could also prove it this winter, with the potential installation of a giant screen depending on the results of the Blues. Photos © Facebook Jérémie Bréaud

“They’re all waking up now!” Who ? Mainly the green or left-wing mayors, those last-minute indignants who for the most part would have been incapable of ensuring the safety of the fan zones. We haven’t heard from them in all this time. The indignation is variable geometry! he exclaims. Especially since to support his statements, Jérémie Bréaud points to many reasons to revolt against the world of sport and its inconsistencies. Points rarely raised by the environmentalist mayor, for whom the recent formalization of the holding of the Asian Winter Games in Saudi Arabia has not provoked, for example, any official reaction.

>Read also: the winners and losers of the absence of a fan zone in Lyon

“We didn’t hear them any more for the Winter Olympics which took place this year in China with artificial snow in the middle of the industrial zones! We also recommend mentioning the silence concerning the F1 or Moto GP GPs which take place each year in Qatar, ”continues the young city councilor, a fine connoisseur. So many examples that the municipal team seems to ignore or pass over in silence, can thus suggest other motivations… more economic. 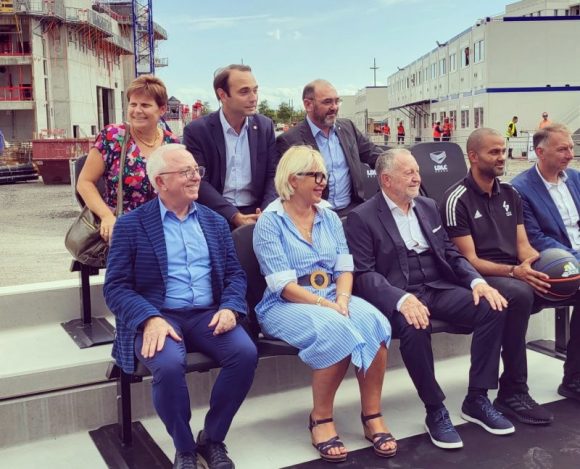 Jérémie Bréaud, present at the laying of the first stone of OL Arena

A point on which Jérémie Bréaud wants to be more transparent, the latter refuting the installation of a fan zone in Bron, for “obvious obvious reasons”. “On the other hand, if our French team goes far, in the half or in the final, we do not forbid ourselves anything”, gives hope to the gloating mayor. For lack of Place Bellecour, the Lyon public could then move to Bron to find the warm atmosphere of the giant screens…

‹ Rally Casinos do Algarve hosts the Portuguese Cup › Macron in Prague: The war will end at the negotiating table, but the Ukrainians will determine the terms