An abandoned funeral hall in Brno came to life with Little Night Fashion. look at

/PHOTO/ The funeral hall in Židenice, which had been dilapidated for more than fifteen years, was brought back to life by the sixth annual Little Night of Fashion. Young designers drew attention to the abandoned building with a show and exhibition program and together started its transformation. 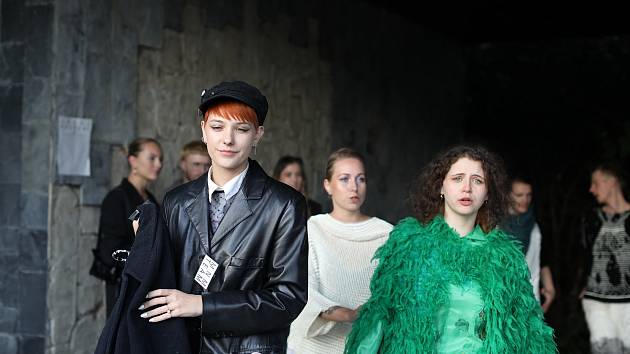 The space was filled by a large group of journalists, photographers, culture critics and other curious visitors from the ranks of art professionals and the general public. On September 30 and October 1, young fashion presented itself with a stylized movement performance, an art installation and a conference program.

“I have been fighting to save this unique building for many years, this year its reconstruction will finally begin.” I am very happy that this object still appeals to artists and I welcome the opportunity to organize a Little Fashion Night here. In addition, restoration work is already underway to save works of art that are part of the building,” says Petr Kunc, deputy mayor of the Brno-Židenice district. “I am extremely happy that despite the demolitions that took place here, some essential parts of the hall, including unique works of art, were preserved in very good condition,” said Professor Tomáš Ruller in his speech.

Instead of smoke, just a few drops of water. The car was presented in Brno. look at

The Židenica funeral hall was designed by the Brno architect and dean of the Faculty of Architecture at the BUT, Ivan Ruller, in 1977. Construction began as a Z event in 1983 and was completed two years later. The hall has been closed for fifteen years and has been slated for demolition since 2011. After extensive discussion and struggle on the part of the residents and some politicians of Židenice, the demolition resolution was canceled and in 2020 it was decided to reconstruct it.