The Dja Reserve pavilion in Prague’s Troja is inhabited by a group of six gorillas, which, in addition to the nine-year-old female Duni, consists of the females Shinda, Kijivu and Kamba, and the males Ajabu and Kisumu. The 25-year-old male from Kisumu is to become the leading male of the group in Prague and is to ensure the continuation of gorilla breeding. In the exhibition of the pavilion, its visitors will also see mantled gueres, catfishes, hamsters or Egyptian bats.

Among other things, the Cameroonian flora is represented in the exhibitions by fig trees and poisonous plants from the Arona family. The plants were chosen to match the areas where gorillas live in the wild. The life of the villagers in the country in Central Africa is brought closer to the authentic artifacts in the school classroom in the pavilion or the mannequins, masks and statuettes created by the natives.

The director thanked the visitors

Despite the bad weather, 200 visitors came to see the opening of the Dja reservation. The program was founded by the band Najachas African from Cameroon. After them, the director of the Prague ZOO spoke: “It was a tremendous job, after the flood in 2013 we had the gorillas in the flood tower and we were worried about them. The new pavilion will have plenty for gorillas and visitors alike“. In his speech, he especially thanked the people and visitors who contributed to the collection for the new pavilion after the flood: “They wouldn’t be here today without youBobek said.

In her speech, Deputy Jana Plamínková praised Director Bobek’s continued work and emphasized that the Prague Zoo ranks among the best in the world. Mayor Hřib only briefly repeated that the Prague ZOO is among the world’s top and that they are also looking forward to the opening of the arctic pavilion, where the polar bears will go.

The gorillas obviously like it in the new pavilion

The head of the gorilla breeders explained well that the gorillas are prepared for the move in advance and described what they will focus on in the future: “Our goal here in the new pavilion is a new family, we want our gorilla group to grow as much as possible and have them here”.

The gorillas in the indoor hidden enclosure seem extremely content, and the sudden influx of visitors didn’t faze them in the slightest, and they immediately set about making the new space cozy. “Most of them were born and raised in zoos, so they are used to people and don’t mind at all”, explained breeder Martin. “Working with gorillas is now much easier for us, the new space allows us to quarantine the gorillas. Photography is not a problem here either, a bigger lens shouldn’t be a problem either, only Isumu has a bit of a problem, so he will have to get used to the attention of photographers for a while,” he added.

How about a visit?

Eight-year-old Míša and his father also came to see the opening of the new pavilion. He steps nervously before the entrance and looks forward to finally seeing the gorillas live for the first time: “Monkeys are the best animals! I would really like to take her home sometime, I would feed her and we would play together”. Misha’s dad smiles and adds that he knows what awaits him when they get to the gift shop.

The exhibition called Reserve Dja belongs to the largest exhibition areas in the zoo in Troja, Prague. The building at the top of the zoo measures approximately 56 by 56 meters. Outdoor enclosures for animals occupy 3,000 square meters. The construction of the pavilion, which was in charge of the company Strabag, began in autumn 2019 and cost about 262.3 million crowns. The management of the zoo decided to build a new pavilion, among other things, because of the experience of the floods in 2002 and 2013. The new pavilion is therefore located outside the flood zone. The original ape pavilion in the lower part of the garden is still occupied by the male gorilla Richard with his sons Kiburi and Nuru. 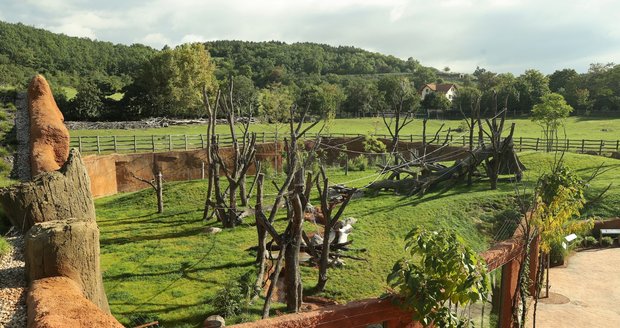 The new gorilla pavilion in the Prague Zoo called the Dja Reserve, September 21, 2022.

MÜLLER PRAHA, sro, ID: (63076411), extract from the registers of companies and self-employed persons

‹ Albert of Monaco moved: his touching tribute to his mother Grace Kelly › Letter to elected officials: NO to concrete where the Suzon flows! – dijoncter.info