In Salzburg instead of at home in Lemberg

09/27/22 Franz Xaver Mozart, a son of Wolfgang Amadeus, lived and worked in Lemberg/Lviv from 1808 to 1838. He does a lot for the bourgeois musical life there. That’s why the Ukrainian conductor Oksana Lyniv – she comes from nearby Brody, the birthplace of the writer Joseph Roth – decided to create a festival here in 2017. 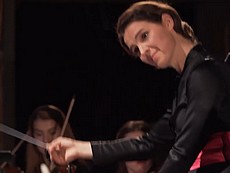 Ever since the LvivMozArt Festival was founded in Lviv (Lemberg), the top priority has been to strengthen international cultural connections and exchanges between Ukraine and Western Europe. In 2022, when the people of Ukraine suddenly found themselves in the new reality of war, this aspiration grew even stronger. 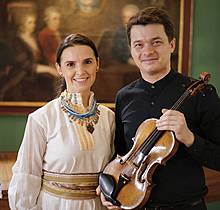 This summer, holding the festival in Lviv was made impossible due to the Russian invasion of Ukraine. Eight well-known Ukrainian artists are therefore meeting in Salzburg. They came together in the Mozart Museums and in the Mozarteum Foundationcome to speak in front of the camera about their experiences, the power of solidarity and music. The result was the touching 80-minute music documentary Lemberg-Salzburg: Mozart for Solidarity. The musicians play works by Franz Xaver Wolfgang Mozart, his pupil Julia von Cavalcabò and Robert Schumann on the original instruments of the Mozart family. And of course pieces by contemporary Ukrainian composers like Bohdan Sehin and Valentyn Silvestrov. In the picture Oksana Lyniv with Andrii Murza and Mozart’s Costa violin in the Tanzmeistersaal in the Mozart residence. (ISM/dpk-krie)

This film now has its virtual premiere: on Saturday, October 1st at 5 p.m. it will be shown on the Youtube channel of the LvivMozArt festival on-line.
A listening sample from Lemberg/Lemberg: the Cantata “The First Day of Spring” op. 28 by Franz Xaver Mozartrecorded in 2019 conducted by Oksana Lyniv

Report on a performance by the youth symphony orchestra
Ukraine recently in Eisenstadt
Young, dynamic and burdened by the war

Salzburg classic in summer 2023: Midsummer night’s dreams on the Salzburg

MeinMed lecture in the city of Salzburg: Fatigue is the pain of the liver

Commentary on climate activism: I scream but nobody hears me