“An important hub for sorting goods for fifty years”

The wholesale market of Vienna-Inzersdorf, in Laxenburger Strasse 365-367, opened in October 1972, has become the most important Austrian market for the wholesale of food and flowers. To celebrate this anniversary, a small ceremony was held on 20 September 2022 with visits to the companies, in the presence of Mayor Michael Ludwig and guests of honor. GMW Großmarkt Wien Betrieb Ltd – a company of Wien Holding WSE Wiener Standortentwicklung – is responsible for the management of the 30 hectare market.

50 years of market activity
Numerous guests attended the 50th anniversary of the opening of the market. Among them the mayor Michael Ludwig, the president of the Vienna Chamber of Commerce, Walter Ruck, the mayor of the district of Liesing, Gerald Bischof and the managing director of Wien Holding, Oliver Stribl.

“The last 50 years have been marked by many economic and social changes but, in this half century, the Vienna wholesale market has managed to remain one of the nerve centers of the city and an important regional supplier”, said Mayor Ludovico. . “I would like to thank all those who enlighten every day that the food supply works well, even in difficult times”.

“The Vienna Chamber of Commerce is connected to the wholesale market mainly through professional organizations, responsible for the food and agricultural trade. These provide support to many wholesalers, in all economic contexts. Ensuring regional and supra-regional supply is particularly important in times of crisis like these, “said Walter Ruck, president of the Vienna Chamber of Commerce.

“For 50 years, the wholesale market in Vienna has been an important goods sorting hub for the city. Today around 220 companies with around 1,400 employees are active here. Around 400,000 tons of goods are handled every year. GMW Großmarkt Wien Betrieb and its 21 employees ensure that everything runs smoothly, every day, “says Oliver Stribl, CEO of Wien Holding.

New brochure of the Vienna wholesale market
During the ceremony, Mayor Ludwig also received the new brochure, an eight-page publication that traces the development of the wholesale market over the past 50 years.

Visits to companies
In addition, during this day, there were visits to companies in the wholesale market area, including Strobl, one of the largest suppliers of fruit and vegetables in Inzersdorf. As a thank you, the delegation made up of Mayor Michael Ludwig, Mayor of the Vienna Chamber of Commerce Walter Ruck, Mayor of Liesinger District Gerald Bischof and CEO of Wien Holding Oliver Stribl, distributed gift bags to working employees at the wholesale market. The market supervisors will continue this distribution campaign in the coming days.

The ceremony ended at the Kleines TafelHaus, the distribution and processing center of the Wiener Tafel. A special thanks went to those people who work on site every day to avoid food waste and help with the distribution of donated products.

Food activities for the 50th anniversary took place in cooperation with the Vienna Chamber of Commerce – Commerce and Agriculture. 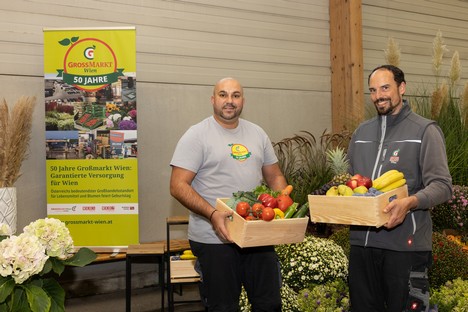 From the market area to the current site
The wholesale market in Vienna went into operation on October 30, 1972. However, it has a long history: starting in 1916, vegetables were locally available in an area near the Naschmarkt, while the goods were destined for the port. goods from Matzleinsdorf. The wholesale flower market was housed in a hall on Phorusplatz in the 4th district. Therefore, a common place of exchange had to be created. The huge empty space in Laxenburger Strasse 365-367 was chosen.

The so-called underground exchange corridor that connects buildings, halls and open spaces, was built in April 1969. It still exists today and provides the market area for electricity and water. The first structure to be built was the area dedicated to the floristic sector, even before the official opening of the wholesale market in Vienna in 1972.

Over the years, the Vienna wholesale market has had a steady development. In 2007, for example, the meat center in St. Marx was needed. Since then, numerous companies in the sector have also been based in the specially built meat room, F One.

Until the end of 2018, the MA 59 (Marktamt) was responsible for managing the market area. In 2019, it took over from GMW Großmarkt Wien Betrieb Ltd – a company of Wien Holding WSE Wiener Standortentwicklung.

Today, the Vienna wholesale market is one of the most important for the wholesale of food and flowers.

Ten things to do in Vienna

Book tells about the Italian army in the First World War

‹ Anne Krieg is a ceramist in tableware › ALL ANTWERP. “I play the violin in a large string ensemble” (Antwerp)