People can download the No Graffiti application free of charge download it on Google Play and the App Store and use it to report illegally painted buildings. So far, according to Macháček, about a thousand users have downloaded the application.

Vandals do not shy away from destroying monuments

THMP employees they remove graffiti from buildings and objects belonging to the Prague municipality. If the painted buildings are owned by the city districts, THMP forwards the report to their staff. After graffiti is reported on objects owned by Prague, it takes several weeks to remove the image on the facade. If a listed building is painted, the process leading to cleaning the wall can take several months. The reason, according to the THMP spokesperson, is that for each object it is necessary to discuss the technological procedure for removing unauthorized painting from facades with the Department of Historic Preservation.

“Based on reports from citizens, we are across Prague they cleaned a number of apartment buildings and heritage-protected buildings. Among them, for example, the New Town Walls from the 14th century, the Barricades monument in Prague 7the facade of the higher vocational school and secondary industrial school in Nové Město, the staircase in the vestibule of the Černý Most metro, the Ládví metro building or the wall of the Krč cemetery,” said Prague councilor Jan Chabr (TOP 09), who has the project in his charge.

From July 2021, according to the deputy chairman of the company’s board of directors, Tomáš Novotný, THMP employees will prepare graffiti on city objects with a total area of ​​over 2500 square meters. After removing the graffiti, the cleaned facades were treated with a so-called anti-graffiti coating. According to Novotný, who is in charge of the No Graffiti project, in the future, it allows additional graffiti to be removed with a special stream of water.

Prague and the city districts are fighting

Urban districts are also fighting graffiti with the help of various programs, some involving private property owner. One of the forms used are grants that city halls provide to owners.

Where to legally spray? Eva Fornálova 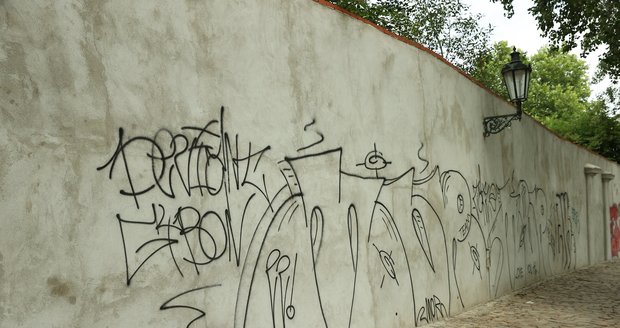 ‹ Bordeaux, Metz, Annecy… the results of the friendly matches of the day before › Russia in 2022 will go on defense much more than expected