Ukraine – Italy. Forecast and announcement for the EuroBasket match

The meeting between Ukraine and Italy will take place on Monday, September 5, in Milan. The start of the combination at 22.00 Kyiv time. The match is shown live on the “Xsport” TV channel.

After two victories in the opening EuroBasket matches, the national team of Ukraine came very close to exiting the groups. However, now our basketball players will face opponents of a completely different caliber. The blue and yellow team opens a series of matches against very strong opponents, each of which is claiming a high place in this tournament. And the first of these meetings will be a duel with the national team of Italy.

The last match between today’s opponents is still too fresh in the memory of all basketball fans. Two days ago, on the Independence Day of Ukraine, our team wanted to please everyone with a victory. The first half of the match of the second round of qualification for the 2023 World Cup was completely dictated by Ainars Bagatskis’ team. We managed to impose our game on the Italians and the result was a solid advantage before the big break – 45:34.

But everything changed after the rest. In the third quarter, the Italians turned off completely, forced the Ukrainians to make mistakes and turned the game into comfortable fast basketball. Ten minutes after the resumption of the match, Ukraine conceded more than in the entire first half (38 points). The Italian national team progressed from behind and took the lead, but again the blue-yellow team did not have enough strength to overtake their opponent. The final siren recorded the defeat of Ainars Bagatskis’ team – 89:97.

After this game, the representatives of the Apennine Peninsula played another match in the selection for the World Cup against Georgia, and it left a very negative trail for the team of Gianmarco Pozzeco (a great defender in the recent past, and now the head coach of Italy). In addition to a very hard fight, which nevertheless ended the victory of the Italians – 91:84, our opponents today lost one of their greatest players. It is about Danilo Gallinari. The representative of “Boston Celtics” has torn his meniscus and will not play at EuroBasket. Instead of him, big man Amadeo Tessitori from “Venezia” is included in the application of “Squad Azzurri”.

After the forced substitution of Danylo Gallinari the application of the Italian national team to the EuroBasket took its final form:

The Italians started the partially home continental forum with an exchange victory over the Estonian national team – 83:62, and already in the second round Gianmarco Pozzeco’s wards awaited a much more serious test. The Apennines were to play against the Greek national team, which was led by Yannis Adetokunbo himself. Most of the Hellenic combinations were ahead, but Italy kept within striking distance. Several times today’s opponents came close to the Greeks, and the struggle reached its peak at the end of the fourth quarter, when the Italians reduced the gap to four points. However, they were not enough for more. The game ended with a defeat for the hosts – 81:85.

After two rounds, the clear leader of Italy is Simone Fontecchio. The Ute Jazz forward scored an average of 22.5 points in two starting matches and gave his partners five assists. It is worth noting that in a recent match against Ukraine, Fontecchio also became the most productive basketball player with twenty points scored. Stars Achille Polonara (13 points + 10.5 European rebounds) and Nicolo Melli (12.5 points + 5 rebounds collected on average per game) will provide good help to their leader. 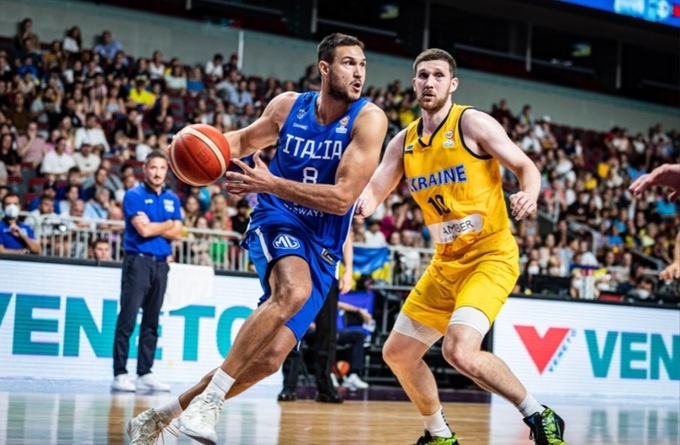 It will be very difficult for our basketball players against Italy. If we beat the same Estonia with great difficulty, the Appenians simply did not notice it. Compared to the sharp match for the “Square Azzurri”, now the factor of his site will play additionally, and Danilo Gallinari shows, of course, unpleasant for the hosts of Eurobasket, but by no means critical. In general, there are not many chances of victory in the national team of Ukraine, but we will count on our team to add from match to match, and our coaching staff can competently use the information received in Riga against an already well-known opponent.

Sport.ua forecast: victory of the national team of Ukraine.

Belgium has found a new source of tanks for Ukraine

‹ Exciting finish! The winner of Birell Grand Prix Prague is Moroccan Amghar › a good price/autonomy ratio with the XL battery