Text: Eva Bourgin. Under the control of the two partners, Jimmy-Riot-Périé and Jérémie Périé, the Gentlecat cat bar seduced passers-by in the Carnot district with its tea room and coworking space.

If many find their appeasement with the purrs of their felines, others prefer to do so around a chocolate drink. Between two conversations, the pleasure remains the same for visitors, caressing a pretty face then admiring new ones. This is what Gentlecat offers, a cat bar that breaks the codes of the traditional tea room. “We tried to keep it both modern and classy. This is their home, the felines roam everywhere. They like the company of people,” rejoices Jimmy-Riot-Perieco-founder of Gentlecat, associated with Jeremiah Perie.

Installed rue Auguste Comte since May 13, this cat bar first took its marks in a first local a few meters away. “Here on a 217 m2, before we had half as much. We waited for the trough of the epidemic crisis to take over this room. On one added coworking and on more space to install people, on a 50 places in all, ”he specifies. A structured project whose idea dates back to 2014.

Fond of felines, Jimmy wanted to become a cat breeder while Jérémie was in the process of creating his own brand of tea. Two passions that then led to the creation of nice cat whose first structure dates from 2015. Despite a change of address, the recipe remains the same. The house of these 10 felines remains cosmopolitan in a modern and authentic decoration.

No need to know nice cat, its black and gold showcase immediately caught the eye. The felines sleeping on the ledge are calling to enter this cloud. Inside, a central counter reveals around thirty flavors of tea. Then, the unstoppable presence of these angelic furballs rose well and truly that this house belongs to them.

A delicate atmosphere that plunges visitors into an almost magical universe between two cups of tea. “For the decoration, we wanted to create 5 different rooms. On the bar, the pink room, the black room, the mezzanine and the coworking. As for the litter, we have hatches, everything is separate, ”says the caretaker. Thus, visitors can then wander between the felines and then study upstairs, where the 12-seat coworking space also serves as a yoga class. 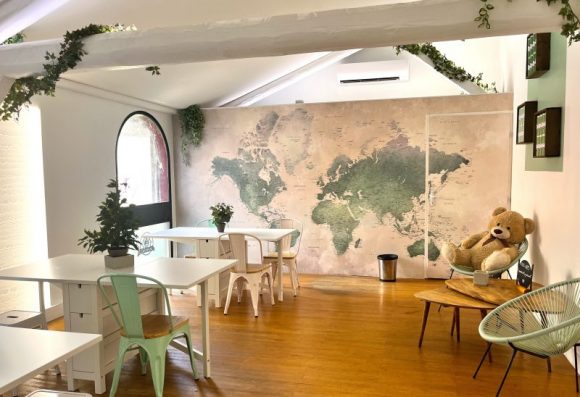 A place where peaceful food and tenderness obviously remain authorized. In addition to the decoration, Gentlecat offers a complete homemade menu. “We both have a CAP in pastry but Jérémie remains the chef. We make all kinds of drinks, cookies, pies and then we also offer weekend aperitifs,” he adds.

During closing, the little kings remain free and wait impatiently for the next day… do not forget all the same that when the masters are not there, the cats may start dancing too…

Aer Lingus: direct flights between Lyon and Dublin with connections to the USA | trips

a building forced to close, 1200 places threatened with abolition

“In Lyon, young people are in danger”

‹ Zalew Bardowskiego will be a bathing area? The district has taken the first step. “I need money” › How to print Germans to evaporate?